This is John’s already legendary concert for the Vietnam vets at the Capital Center, Washington D.C. Storming versions of old CCR classics, not played for 15 years.

John Fogerty was backed by an unknown LA Band called “The Bonebreakers”.

Fogerty played Creedence material again at a concert in Washington, D.C., for Vietnam veterans that took place on July 4, 1987. The show was aired on HBO. Aside from a guest appearance at the Palomino and performance at the 1986 Rock and Roll Hall of Fame Induction Ceremony, this was the first time Fogerty had performed any Creedence Clearwater Revival songs for a large audience since 1972.

And this is the story about John Fogerty and Fantasy Records:

What makes the story authentically tragic is that CCR planted the seeds of its own destruction, signing a disastrous contract with Fantasy Records just as they were about to hit it big. Fogerty lost control of his own compositions. All of his hits for Creedence were owned by Fantasy, and he was on the hook to deliver hundreds more songs in the coming years — but he refused to do it. Fogerty says he reaped only a fraction of the money that was rolling in. The band got caught up in an offshore tax scheme that he says was engineered by Fantasy, snaring them in a federal investigation that ate up his savings in legal fees. Creedence songs kept cropping up in commercials, and Fogerty had no authority to prevent them from being used. The predicament gave him an ulcer by age 24 and bottled him up for decades — he quit music for long periods and took refuge in booze. Being sued for plagiarizing your own work — which he eventually was — must rank high on life’s frustration meter.

For all that, it was in many ways Fogerty’s stubbornness that deprived the world of years and years of his music and performances. He simply refused to play ball by rules he felt were unfair. An emotional high point of the book comes in 1987, when he plays a show in Washington for Vietnam veterans. For the first time in years, he performs the old Creedence tunes — “Born on the Bayou,” “Who’ll Stop the Rain” — and the vets go wild. Afterward, one of the vets gives Fogerty his service medal. Overwhelmed, Fogerty pins it to his guitar strap.

What a great concert …  a triumph about Saul “Mr. Greed” Zaentz.

This is a German bootleg; the last three tracks are bonus tracks rom the Oakland Coliseum, Oakland, California, December 7, 1986. The concert for the Vietnam vets at the Capital Center, Washington D.C is a broadcast recording … excellent quality ! 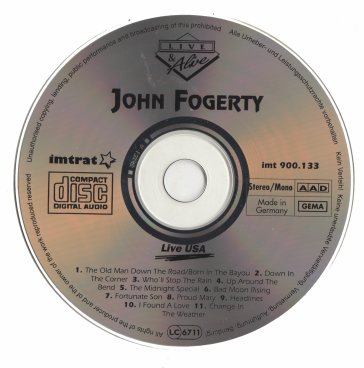 One of the most instantly recognizable voices in music is that of John Fogerty. A dirty and rough sound, filled with aggression, passion and loneliness, lit up by its sheer sense of force and stained beauty, Fogerty’s unique vocals lifted the profile of Creedence Clearwater Revival in the ‘60s with songs capturing the struggles at the time for peace, the fallibility of man, and the nature of imagination and individuality.

His music has since become stuff of legend, and any look back in history, be it on television or film, and even in our own minds, sees Creedence there somewhere waiting to pounce, to remind us of eras forgotten. Like him or not, Fogerty remains a pervading force in music, with songs like “Bad Moon Rising”, “Lookin’ out My Back Door” and “Run through the Jungle” still featuring prominently on radio playlists and on movie soundtracks. It’s a force impossible to escape, so much so that Fogerty and his successful, and at times troubled, little group to this day are as heralded as the Beatles and the Rolling Stones when it comes to shaping a generation through sound.

It’s no surprise, then, that someone, somewhere should decide to pay tribute to Fogerty and his music. Dren Records’ Chooglin’: A Tribute to the Songs of John Fogerty does just that, bringing together a range of predominantly unknown artists to churn out their own interpretations of some of the biggest Creedence hits mixed with a couple of lesser known tracks.

“Who’ll Stop the Rain”—as seen through the eyes of Mark McKay and Scott Murawski—is a marvelous way to open the tribute. McKay and Murawski, turning the song into a duet, each stick close to the boundaries of the original song. Their rendition is a perfect example of how the album should be, a couple of guys with their guitars doing what is essentially a note-for-note cover.

Similarly, Frog Holler’s take on “Have You Ever Seen the Rain?” is just as gorgeous, featuring a strong but soft lead vocal and backed by the subtle twang of a banjo, the essence of Fogerty’s ode to contained chaos is captured effortlessly.

The Ray Mason Band’s “Don’t Look Now (It Ain’t You or Me)” and Scott McKnight’s lush version of “It’s Just a Thought” are just as stunning. Mason takes “Don’t” on a compelling ride, jumping about with brilliant energy, while McKnight’s cover is classic down-home country.

Former session guitarist for Bob Dylan, John Jorgensen funks up “Lookin’ out My Back Door” while retaining the calamitous clatter of the original. The Good Sons do the same thing to “Someday Never Comes” sticking to the original sound of the song, with Michael Weston King’s sleek vocals twisting it ever so slightly into something calm and wistful, becoming a comforting companion to Fogerty’s more pleading original version.

Adding further life to these old tunes is Gringoman’s “Run through the Jungle” and Star City’s “Penthouse Pauper”. “Jungle” is flooded with lush haunting drums, and features perhaps the most faithful Creedence licks, while “Pauper” feels fresher than ever with its demanding vocal style and non-too-busy guitars. Both Gringoman singer Eric Ambel and Star City’s Jason Lewis adopting all the right elements Fogerty’s trademark voice to enhance their renditions with screaming presence.

The Calico Band’s version of “Lodi” is the album’s highlight. The band retains the silky sound of the song, with singer Melinda McPeek’s gorgeous vocals adding sumptuous effect. The version carries all the lonesome spirit of the original, so much so it’s like Fogerty himself is sitting in somewhere, making sure all goes smoothly. He needn’t worry though, the Calico Band don’t put a foot wrong.

Some of the bands on the album, however, aren’t as successful.

The Damn Lovelys’ version of “Hey Tonight” is a grating few minutes, draining all the ferocity of the original with annoying Hole-sounding vocals, especially on the “Johnny’s gonna find religion”-hook. Gingersol’s “Up Around the Bend” is too soft and hardly comes close to reliving the aggression of the original. This is a song that needs to be screamed out, foot pounding on the floor, hand slamming the air, yet Gingersol’s interpretation misses the mark, becoming frustrating to listen to when the vocals refuse to heat up. Bellwether’s “As Long as I Can See the Light” has a similar problem, while Fogerty’s vocals on the original are already toned down, singer Eric Luoma slows them down even further creating a depressing, unadventurous song.

The only time such slowing down of the songs works is on the Mary Janes’ “Bad Moon Rising”, forcing in the mind images of a campfire on the Louisiana bayou, the players often looking at each other and smiling. The song, usually a driving rock tune, one that is quite probably playing somewhere in the world at any given moment, is already affecting, but singers Janas Hoyt and Glenn Hicks manage to make it even more so never rising above maudlin monotone throughout their rendition.

For the most part, Chooglin’ is a wonderful updating of Fogerty’s style and talent. Many of the bands do what, for me anyway, a good tribute album should—they don’t change the songs so that they become unrecognizable, after all the songs are loved for what they are, not for what they never were, and they don’t work when badly modernised, as they represent an era—one in which they should remain.

On the whole, though, the album fulfils its intention, with most of the bands following the Mary Janes’ lead adding their own sound to one already perfected. Only rarely do the musicians fail, but then, like any tribute album, no one song will appeal to all listeners. Fogerty purists, however, are sure to get a kick out of much of what’s on offer.(by Nikki Tranter) 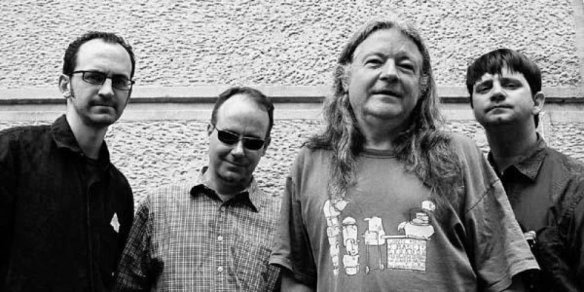 All songs written by John Fogerty