The performances of these enchanting songs display the full range of João Gilberto’s singular style; the intimate voice and his innovative, linear approach to the guitar that revolutionized Brazilian music and the international pop scene.

On this album João Gilberto was accompanied by Walter Wanderley (orgn) and hisgroup.

And it´s another highlight in the long career of the one and only João Gilberto. 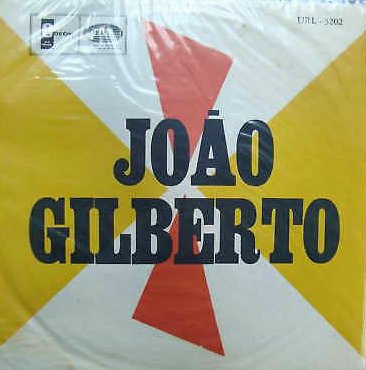 The singer and composer was known best as a pioneer of the bossa nova genre, which found international popularity in the 1960s.

Reports say Gilberto died at home in Rio de Janeiro after a period of illness. His son confirmed the news of his death in a Saturday Facebook post.

“His fight was noble, he tried to maintain dignity,” Marcelo Gilberto said. )BBC)

João Gilberto was born in Juazeiro, Bahia, the son of Joviniano Domingos de Oliveira, a wealthy merchant, and Martinha do Prado Pereira de Oliveira. He lived in his native city until 1942, when he began to study in Aracaju, Sergipe, returning to Juazeiro in 1946. At the age of 14, he got his first guitar, given by his father. Still, in Juazeiro, he formed his first band, called “Enamorados do Ritmo”. He moved to Salvador, Bahia in 1947. During his three years in the city, he dropped out of his studies to dedicate himself exclusively to music and at the age of 18 began his artistic career as a crooner at the Rádio Sociedade da Bahia. 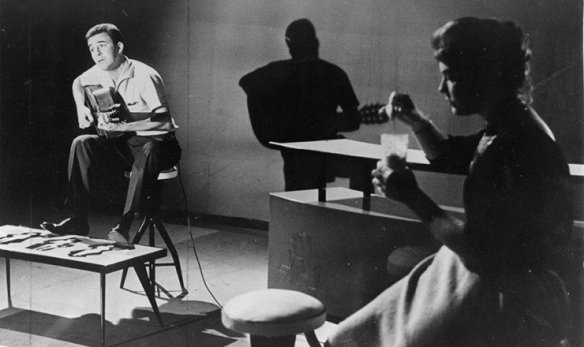 Gilberto’s first recordings were released in Brazil as two-song 78-rpm singles between 1951 and 1959. In the 1960s Brazilian singles evolved to the “double compact” format, and João would release some EPs in this new format, which carried four songs on a 45-rpm record.

Soon afterward, Gilberto’s father, upset by his son’s bizarre singing style and refusal to take ‘normal’ work, had him committed to a mental hospital. In a psychological interview there, Gilberto stared out of the window and remarked “Look at the wind depilating the trees.” The psychologist replied “but trees have no hair, João”, to which Gilberto responded: “and there are people who have no poetry.” He was released after a week. The next year (1956), he returned to Rio and struck up old acquaintances, most significantly with Antônio Carlos Jobim, who was by then working as a composer, producer, and arranger with Odeon Records. Jobim was impressed with Gilberto’s new style of guitar playing and set about finding a suitable song to pitch the style to Odeon management. 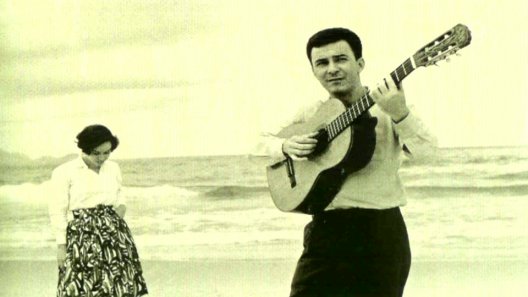 Gilberto was known for his demanding acoustic and noise-control standards. During a recording session of the song “Rosa Morena”, he insisted on 28 takes to get the pronunciation of the o in “Rosa” just right.[8] Nonetheless, despite his high acoustic standards, he skipped a contractually required sound check prior to a July 2003 performance at the Hollywood Bowl, in Los Angeles. This negligence (and the ensuing sound fiasco) prompted the audience to stream from the venue before the concert ended.

In 1997, Gilberto sued record label EMI over their reissue of several of his early works, which he contended had been poorly remastered. According to The New York Times, “A statement by his lawyer at the time declared that the reissues contained sound effects that ‘did not pertain to the original recordings, banalizing the work of a great artist.” Following the incident, EMI ceased production of the albums in question, and, as of 2008, the lawsuit was yet to reach a decision.

In 2000, Gilberto won the nomination for the Best World Music Album category in the 42nd Annual Grammy Awards for his work in the album João Voz E Violão.

In 2011, he was sued and evicted from an apartment in Leblon by his landlord, Countess Georgina Brandolini d’Adda.

On 17 May 2017, Gilberto received an honorary doctorate in music from Columbia University though he himself did not attend the commencement ceremony.[14]

It was reported in December 2017 that Bebel Gilberto (Isabel), João’s daughter through his marriage to Miúcha, was seeking control of his financial affairs because of his declining mental state and heavy indebtedness.

Chega de Saudade is the debut album by Brazilian musician João Gilberto and is often credited as the first bossa nova album. The title can be translated roughly as “enough longing”, though the Portuguese word saudade carries with it more complex meaning.

By the time of the album’s release, newspaper O Estado de S. Paulo stated that Gilberto “is one of the most musical of our popular singers, a certainty which broadly compensates for his lack of volume. In this regard, it is worth noting his interpretation of ‘Desafinado’. Besides, he reveals an unorthodox good taste for the choice of melodies recorded in this first LP and a sobriety in interpretation we have rarely observed”. (by wikipedia) 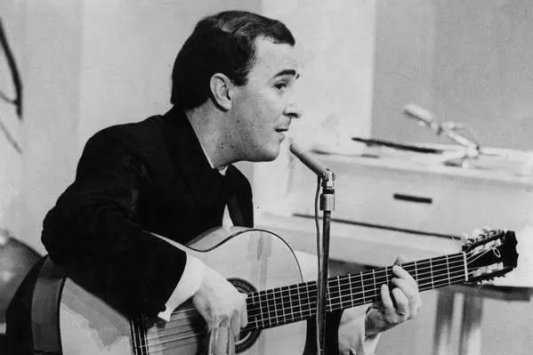 João Gilberto’s debut LP, 1959’s Chega de Saudade, was one of the most important bossa nova recordings, and credited by many as the album that, more than any other, launched bossa nova as a major popular music genre. The dozen songs add up to a surprisingly short playing time of about 23 minutes, but introduce several of bossa nova’s most beloved trademarks: breezy, soothing melodies and vocals; tight arrangements with seamless blends of clipped guitar strokes and light orchestration, and, of course, the bossa nova rhythm. The most popular of these songs (“Chega de Saudade” and “Desafinado”) had already been released as singles in 1958, but though they might be the most memorable tracks, the album maintains a consistently high standard (if a fairly similar mood throughout).  (by Richie Unterberger) 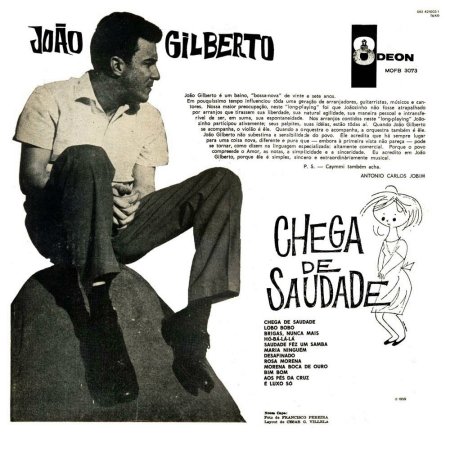 Guitarist/vocalist Joao Gilberto is credited with being the originator of the bossa nova, due to his 1950s affiliation with songwriter Antonio Carlos Jobim. Hence, the rest is history. While this recording captures his genius via a solo perfomance at Italy’s “Umbria Jazz” festival in 1996. His easily identifiable sound is intact here, as Gilberto delves into fourteen pieces, composed by Jobim and others. The artist’s wistful, hush-toned vocals and rhythmically charged acoustic guitar work just reaffirms his significance in modern music. He typifies the coolness of Brazil amid his relatively toe-tapping pulses and contrasting melodic interludes. Part of the beauty, resides within his often-lilting harmonic structures, deterministic sense of purpose and understated themes. Gilberto’s sensual demeanor and calming celebration of life hits the mark in a huge way, largely due to his effortless mode of execution and inspiring musical persona. (by Glenn Astarita)

Joăo Gilberto on stage at the sold-out Teatro Morlacchi is at his seductive best, which doesn’t necessarily mean he’s whispering. For the appreciative European audience, the singer was more than willing to exercise his vocal chords, express a wide range of emotions, and even produce the occasional vibrato, a taboo for most of his career. Moreover, CD listeners who were forced to crank up the volume in order to hear Joăo Voz e Violăo (2000) will be glad to know that both voice and guitar are captured with excellent clarity on Live at Umbria Jazz.

All the songs on the disc were composed between 1942 and 1963. These 21 years cover Joăo’s formative period, from his childhood in Juazeiro to the early years of his solo career. Eight of the fourteen songs were written by Dorival Caymmi or Tom Jobim, all within a narrow period in each composer’s career. Caymmi is represented with “Rosa Morena” (1942), “Doralice” (1945), “Lá Vem a Baiana” (1947), and “Saudade da Bahia” (1957); Jobim with “Chega de Saudade” (1958), “Desafinado” (1959), “Corcovado” (1960), and “Garota de Ipanema” (1962). The four Caymmi songs had been hits before Joăo recorded them—three were released while he was in his teens. The Jobim songs, on the other hand, were all launched by Joăo himself…  (by Daniella Thompson) 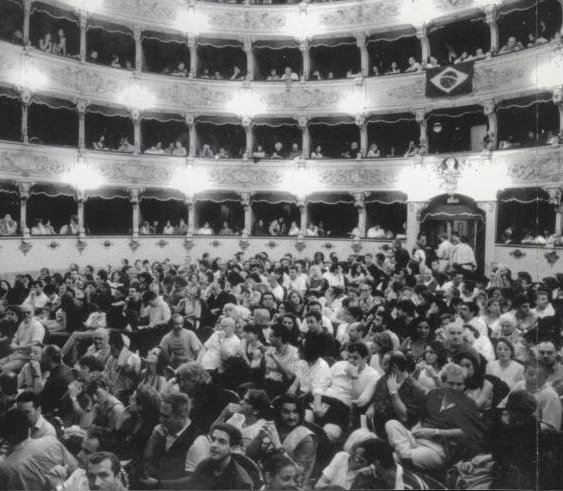 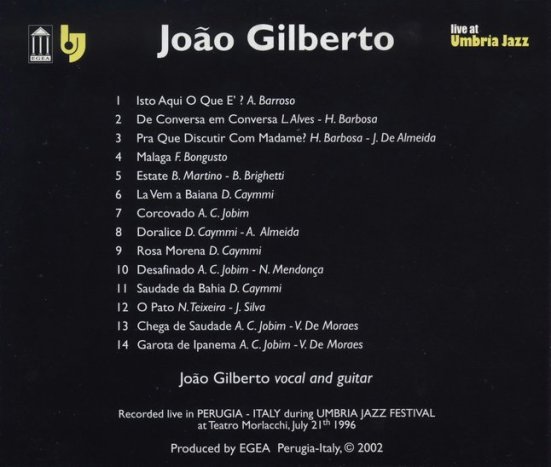 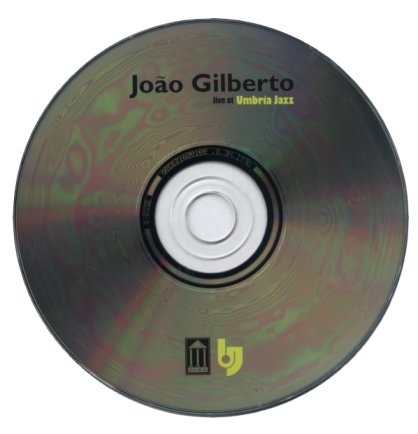