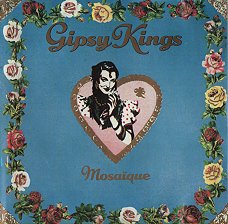 Mosaïque is the fourth studio album by the Gipsy Kings, released in 1989 in Europe and Canada. The main difference between both versions is the replacement of the instrumental “Bossamba” on the Europe release for “Niña Morena” on the North American release. The song order also changes on both albums and songs “Caminando Por la Calle”, “Trista Pena” and “Vamos a Bailar” are slightly different versions.
Note that “Viento Del Arena” is a studio album release from the song appearing in Luna de Fuego. It was sung as Turkish by Volkan Konak, Turkish folk singer as “Lilalı Kız” (“Girl with lilac”) at his 3rd album, “Gelir Misin Benimle” (“Do you come with me?”) in 1994. (by wikipedia)
The second major album for the Gipsy Kings on Elektra, Mosaique makes use of a mild range of outside genres and instrumentation that are added slyly to the basic flamenco mix set up by the ensemble. Most notably, modern drum kits and synthesizers make their presence thoroughly known throughout the course of the album. Some rai fusion slips into “Viento del Arena” in a sideways manner, becoming the focus of the sound in turn with the backdrop for the more traditional guitar work. The title track introduces some jazzy guitar riffs mixed in with the proper flamenco palmas to form an exquisite rhythmic structure. The live “Vamos a Bailar” incorporates a Cuban flavor, and the first appearance of the outstanding “Volaré” cover here mixes a tiny bit of Italian song into a huge amount of flamenco power.

The rest of the tracks largely follow a more standard set of the Kings’ brand of flamenco, which is more than formidable on its own. The star of all the tracks, regardless of style, is the duo of Tonino Baliardo on guitar (often outdoing even his own outstanding father Manitas de Plata in his abilities) and Nicolás Reyes on lead vocals. It’s Reyes who really gives the Kings their signature sound, with just enough gruffness in his voice to make a unique sound and enough power to match with any top-league flamenco singer. The incorporation of a number of excellent musicians only sweetens the pot. This is one of the most highly recommended Gipsy Kings albums for anyone coming fresh to the sounds of the group and a fine pick for complete newcomers to the genre as well. (by Adam Greenberg)

And here´s the European Version …. 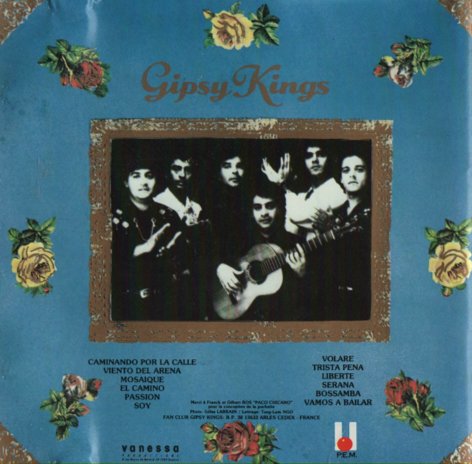 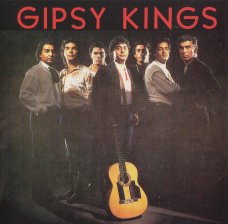 The Gipsy Kings are largely responsible for bringing the joyful sounds of progressive pop-oriented flamenco to the world. The band started out in Arles, a village in southern France, during the ’70s when brothers Nicolas and Andre Reyes, the sons of renowned flamenco artist Jose Reyes, teamed up with their cousins Jacques, Maurice, and Tonino Baliardo, whose father is Manitas de Plata. They originally called themselves Los Reyes and started out as a Gypsy band traveling about playing weddings, festivals, and in the streets. Because they lived so much like Gypsies, the band adopted the name The Gipsy Kings. Later, they were hired to add color to posh parties in St. Tropez. Popularity did not come to Los Reyes right away, and their first two albums attracted little notice. At this point the Gipsies played traditional — albeit passionate — flamenco music punctuated by Tonino’s precise guitar playing and Nicolas’ exceptional voice. Though they had devoted fans, they still had yet to gain wider recognition until 1986 when they hooked up with visionary producer Claude Martinez, who could see that the Kings had the makings of a world-class band. 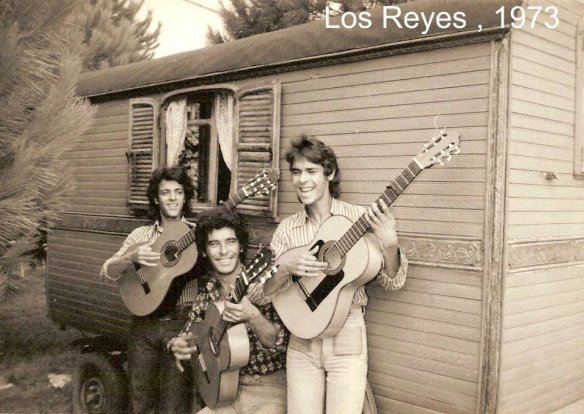 Thanks to Martinez, the Kings began to relax a bit and take on a more contemporary edge, combining their traditional songs with sounds from the Middle East, Latin America, North Africa, a hint of rock, and their inimitable joy. It was, in a music industry filled with flamenco purists who resisted any kind of change, a very daring move, and many felt The Gipsy Kings would fall flat and disappear. But the naysayers were wrong. In 1987 they released “Djobi Djoba” and “Bamboleo” on an independent label and scored two smash hits in France. Their success led them to sign with Sony Music and release their eponymous debut album later that year. Again, they had tremendous sales in France, and then found their album was appearing on the Top Ten album charts in 12 European countries, including England, which is traditionally unreceptive to international music. 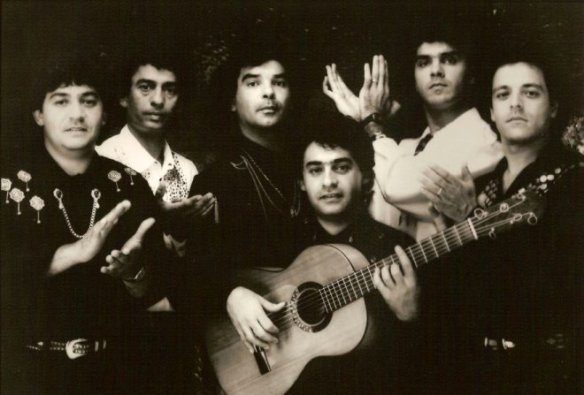 In the late ’80s, The Gipsy Kings, debuted in the U.S. at the New York New Music Seminar. This led them to sign to Sony in America. In 1989, they were invited to perform at the inaugural ball for George Bush, but they chose to return home to rest and be with their families. (by Sandra Brennan)

Gipsy Kings is the third album by the French Rumba Catalana band Gipsy Kings, which was released in 1988. The album was their first to reach a worldwide audience, going gold across France, the UK, USA and other countries. The US and European versions of this album are identical except in some cases the song order may differ.

And their worldwide debut is an especially dynamic introduction to the sound of the Spanish Gypsy ensemble. This album contains re-recorded versions of past hits.