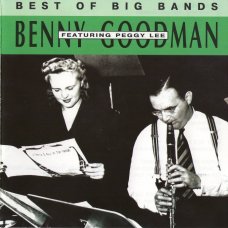 When Peggy Lee made her first recording with Benny Goodman’s orchestra, she was 19 and scared to death. The result, “Elmer’s Tune,” is one she probably wished were lost, but the other 15 recordings on this CD (all from 1941) find her improving month by month, struggling gamely through the difficult Eddie Sauter and Mel Powell arrangements. Many of these titles were formerly rare and offer an interesting look at the early Peggy Lee. (by Scott Yanow)

Just as Benny Goodman was enjoying another triumphant year in 1941, The King Of Swing attended a nightclub in Chicago when he saw a young jazz vocalist singing in a vocal group, and it was during this engagement she was hired by the bandleader to sing at the Ambassador West Hotel and the College Inn as this encounter resulted in a series of record dates from Goodman and Lee for Columbia Records. Presented in it’s own exclusive 78 set later that year, Benny Goodman Feat’ Peggy Lee bring to us a starting point for this talented young jazz vocalist who got shot to stardom with a lively set of superb songs that she performs in upbeat style after being welcomed into Goodman’s orchestra after one of it’s lead band singers, Helen Forest, had left where she took her place.

Beginning with there first class version of the Glenn Miller classic Elmer’s Tune, which was a huge success, the track set proceeds with great harmonic excellence on other classic jazz standards that include That’s The Way it Goes, Duke Ellington’s I Got It Bad And That Ain’t Good, Shady Lady, the rousing Somebody Else Is Taking My Place, Winter Weather and Not Mine, as well as snappy takes of classic pop standards that include My Old Flame, How Deep Is The Ocean? and Everything I Love until ending with the final track Not A Care In The World. Just as Goodman was enjoying another triumphant year in 1941, Benny Goodman Feat’ Peggy Lee became another milestone achievement for The King Of Swing and Lee’s rise to national fame that would result into a highly successful and prolific music career for this master jazz vocalist, which makes this full recorded session (78 set) a landmark from jazz history. (by RH, amazon.com) 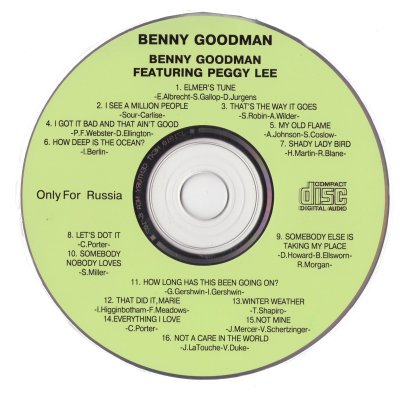 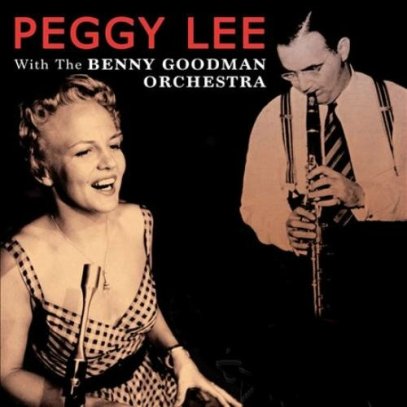 The reception to the original 1950 long-playing double-album was exceptional, as had been the band’s appearance at Carnegie Hall.
The Penguin Guide to Jazz Recordings includes the 1999 release in its “Core Collection,” in addition to giving it a four-star rating (of a possible four). Penguin authors Richard Cook and Brian Morton describe the release as “a model effort, masterminded by Phil Schaap, whose indomitable detective work finally tracked down the original acetates and gave us the music in the best sound we’ll ever get; with powerful, even thrilling, ambience.” (by wikipedia)

Benny Goodman’s January 16, 1938, Carnegie Hall concert is considered the single most important jazz or popular music concert in history: jazz’s “coming out” party to the world of “respectable” music, held right in that throne room of musical respectability, Carnegie Hall. The 1950-vintage three-album set from the concert only solidified its reputation, and an earlier CD release derived from the LP master was a choice entry in the Goodman catalog for more than ten years. For the 1999 release, producer Phil Schaap re-sourced the concert from original 78 rpm transcription discs; he has also rescued “Sometimes I’m Happy,” the show’s original second number, and “If Dreams Come True,” its original first encore, along with the unedited version of “Honeysuckle Rose” (with Harry Carney in a two-chorus baritone sax solo and Buck Clayton’s three-chorus trumpet solo), all previously lost. The detail is startling, with soloists who are more up close than ever and even details from the audience reactions. Gene Krupa’s drums have an extraordinary richness of tone, and the whole rhythm section finally gets its due as well, even Freddie Green’s rhythm guitar solo during “Honeysuckle Rose,” which is gloriously enhanced. There will be casual listeners, however, who won’t like this release because Schaap has chosen to leave a lot of surface noise, in the interest of preserving the original concert ambience. Some compromise should have been possible, however, where the worst source damage is concerned, and some casual listeners may prefer the original CD release, despite the enhancements featured here. (by Bruce Eder)

Born into a large, poverty stricken family, Benny began playing the clarinet at an early age. He was associated with the Austin High School Gang, having gone to school with drummer Dave Tough. By the time he was twelve, Goodman appeared onstage imitating famous bandleader/clarinetist Ted Lewis. It was at this concert that Ben Pollack heard the young clarinetist and Benny was soon playing in Pollack’s band. Goodman’s first recordings were made with the Pollack group in 1926, and give a strong example of Benny’s influences at the time including Jimmie Noone, who was then with Doc Cook and His Dreamland Orchestra and Leon Roppolo of the New Orleans Rhythm Kings. During this period Goodman recorded his first sides as a leader with members of the Pollack band including one 1928 date which features the only known recording of Benny on alto and baritone saxophones. 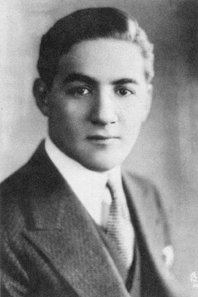 Following the musical migration out of Chicago and into New York, Goodman became a very successful and popular free-lancer, joining the likes of Tommy and Jimmy Dorsey in New York studios. In 1934 Benny put together his first big band, featuring Bunny Berigan on trumpet, Jess Stacey on piano and Gene Krupa on drums. With the addition of some excellent, sophisticated arrangements by Fletcher Henderson, the “Swing Era” was born.

Goodman spent the next fifty years recording and touring with various groups big and small, including some very successful trips to Russia and the Far East. He also played many concerts on a classical format that received mixed reviews.

Known by musicians for his stand-offish and “cheap” nature, many sidemen had a love/hate relationship with Goodman. Many musicians claimed that Benny was dishonest when it came time to pay off the band and many more recalled the Goodman “ray”, the dirtiest of looks received when a mistake was made. That aside, its clear that without Goodman the “Swing Era” would have been nowhere near as strong when it came, if it came at all.

After his death, the Yale University library received the bulk of Goodman’s personal collection including many private never-before-heard recordings and rare unpublished photos. (by Ted Gottsegen)

And these are real beutiful recordings from the early seventies in Sweden and Denmark released for the first time many years later… what a sound !

Swing music, or simply Swing, is a form of American music that developed in the early 1930s and became a distinctive style by 1940. Swing uses a strong rhythm section of double bass and drums as the anchor for a lead section of brass instruments such as trumpets and trombones, woodwinds including saxophones and clarinets, and sometimes stringed instruments such as violin and guitar, medium to fast tempos, and a “lilting” swing time rhythm. The name swing came from the phrase ‘swing feel’ where the emphasis is on the off–beat or weaker pulse in the music (unlike classical music). Swing bands usually featured soloists who would improvise on the melody over the arrangement.

The danceable swing style of big bands and bandleaders such as Benny Goodman was the dominant form of American popular music from 1935 to 1946, a period known as the Swing Era.

The verb “to swing” is also used as a term of praise for playing that has a strong rhythmic “groove” or drive. (by wikipedia)

This is Volume 1 of a real fine introduction to this music … one the most important roots of Jazz ! 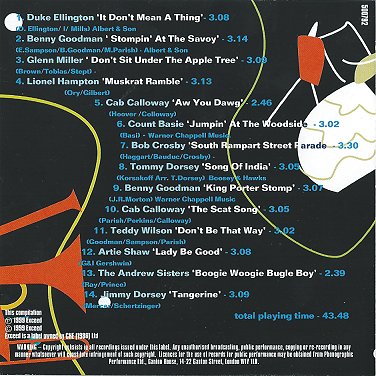