Some words about the grat Nicoló Paganini:

Nicolo Paganini was born in Genoa, Italy, Oct 27, 1782. He was one of six children born to Teresa and Antonio Paganini. He was an Italian violinist and a composer, considered by many as the greatest of all time.

He received music lessons from his father before he was 6 years old and later from the best instructors in Genoa. He began to perform in public and composed his first sonata in 1790. In 1795 he went to Parma, Italy to study but the teachers there told him they could do nothing more for him. He then commenced on a course of self-training so rigorous that he often played 15 hours a day. In 1797 he started his concert tours, which for many years consisted of triumph after triumph. From 1805 to 1808 he was the court solo violinist at Lucca, appointed by Napoleon’s sister Elisa Bacciocchi. In 1809 Nicolo became a free-lance soloist performing his own music. He performed concerts throughout Italy.

In early 1828 Nicolo began a six and half year tour that started in Vienna and ended in Paris in September 1834. During the two and half year period from August 1828 to February, 1831 he visited some 40 cities in Germany, Bohemia, and Poland. Performances in Vienna, Paris, and London were hailed widely, and his tour in 1832 through England and Scotland made him wealthy.

His playing of tender passages was so beautiful that his audiences often burst into tears, and yet, he could perform with such force and velocity that at Vienna one listener became half crazed and declared that for some days that he had seen the Devil helping the violinist. 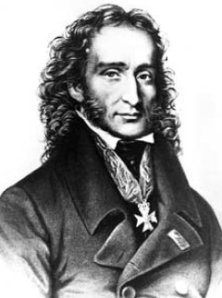 Once his fame was established, Paganini’s life was a mixture of triumphs and personal excesses. He earned large sums of money but he indulged recklessly in gambling and other forms of dissipation. On one occasion he was forced to pawn his violin. Having requested the loan of a violin from a wealthy French merchant so that he could fulfill an engagement, he was given a Guarnerius violin by the merchant and later refused to take it back when the concert was over. It was Paganini’s treasure and was bequeathed to the people of Genoa by the violinist and is still carefully preserved in that city

Paganini’s genius as a player overshadows his work as a composer. He wrote much of his music for his own performances, music so difficult that it was commonly thought that he entered into a pack with the Devil. His compositions included 24 caprices (published in 1820) for unaccompanied violin that are among the most difficult works ever written for the instrument. He also challenged musicians with such compositions as his 12 sonatas for violin and guitar; 6 violin concerti; and 6 quartets for violin, viola, cello, and guitar.

According to Philip Sandblom in his book Creativity and Disease few geniuses have experienced such lucky agonies as Paganini, bedeviled by a host of chronic complaints, including Ehlers-Danlos syndrome, marked by excessive flexibility of the joints. “This enabled Paganini to perform the astonishing double-stoppings and roulades for which he was famous”, Sandblom writes. “His wrist was so loose that he could move and twist it in all directions. Although his hand was not disproportional he could thus double its reach and play in the first three positions without shifting.”

It is well known that Paganini rarely practiced after his 30th birthday. Those who were closely associated with him used to marvel at his brilliant technique and watched him closely to discover how he retained it.

In performance Paganini enjoyed playing tricks, like tuning one of his strings a semitone high, or playing the majority of a piece on one string after breaking the other three. He astounded audiences with techniques that included harmonics, double stops, pizzicato with the left as well as the right hand, and near impossible fingerings and bowings.

Antonia Bianchi, a singer who toured with Nicolo in 1825, bore him a son, Cyrus Alexander on July 23, 1825. Although they were never married, he did lavish affection on his son for the rest of his life.

Known as a gambler, he unsuccessfully attempted to open a gambling casino in Paris in 1838. Later he moved to Marseilles and then to Nice, France where he died on May 27, 1840. (by paganini.com)

And now some words about his album:

Paganini’s genius was as much for crowd-pleasing as for technical expertise, although it is doubtful whether he would have made any distinction between the two; he wrote his 24 Caprices, which changed our perception of the violin’s possibilities, primarily to show in concert that only he could play anything so difficult. But he was a creature of fashion as well as innovation, and the passages of showy virtuosity in these concertos are framed in an accessible bel canto idiom. Indeed, the orchestral introduction to the First Concerto sounds as if it were lifted straight from a Rossini or Donizetti overture.

As this sympathetic recording shows, these pieces – when treated with an appropriately light touch – are enjoyable and entertaining, even though the violin’s high tessitura can become tiresome.

Ilya Grubert understands Paganini’s flashy wit, and plays with ebullience, sometimes at the expense of a truly bel canto tone, although he gives a sensitive account of the Adagio of the darker second concerto.

The Moscow Chamber Orchestra, under Constantine Orbelian, is nicely unobtrusive in what are above all showpieces for the soloist, but the most consistently assured recording of the first concerto is probably still Perlman’s for EMI. (by William Humphreys-Jones) 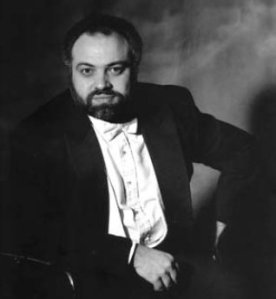