Twist of Jobim contains a single disc with 11 songs. The CD has an unusual multi-artist tribute to the music of Antonio Carlos Jobim. Some of the Twist of Jobim songs are made funky (but in a melodic and tasteful way), while others become quiet (but still passionate) ballads. Twist of Jobim are all jazz-oriented songs.

The debut release from the I.E. label (which is connected with Polygram) is an unusual multi-artist tribute to the music of Antonio Carlos Jobim. Some of his tunes are made funky (but in a melodic and tasteful way), while others become quiet (but still passionate) ballads. The treatments are all jazz-oriented, and there is plenty of solo space for the likes of guitarist Lee Ritenour (in one of his finest jazz efforts), pianists Dave Grusin and Alan Pasqua, altoist Eric Marienthal, bassist Christian McBride, and tenor saxophonist Ernie Watts. Plus, there are guest spots for Herbie Hancock (an excellent acoustic piano solo on “Stone Flower”), the sopranos of Art Porter (on “Dindi”) and Steve Tavaglione, the Yellowjackets (who team up with Ritenour on “Mojave”), singer El DeBarge (“Dindi”) and the vocal duo of Al Jarreau and Oleta Adams (“Waters of March” and a lightweight rendition of “The Girl from Ipanema”). Nearly every song holds one’s interest, the melodies are celebrated, and the fresh interpretations contain more than their share of surprises. (by Scott Yanow)

Sizzling from start to finish, “Harlequin” is the result of one of the most intuitive partnerships in the world of jazz.

Although Lee Ritenour and Dave Grusin had been working together for a decade, “Harlequin” is regarded by the two musicians as their first genuine recorded collaboration, whereby from original concept, through selection of tracks and personnel to arrangements and mixing, it was truly a joint effort.

Included in the top ten best jazz recordings ever by a noted poll, “Harlequin” is a blend of smoldering Brazilian rhythms and moods with a freshness and verve that brings on a tingle of excitement each time it is played.

The scintillating jazz fusion of “Harlequin” includes added spice in the form of a major contribution by Brazilian singer-songwriter Ivan Lins who appears on three tracks.

The energy which infuses  the entire album is sparked from the first notes of the title track, an exotic, exuberant Ivan Lins song, with the composer adding vocals which are akin to a beautiful musical instrument.  You can see him doing the song on the video and DVD of “Lee Ritenour and Dave Grusin Live From the Record Plant.”

Dave Grusin wrote the next piece, the glittering “Early A.M. Attitude.”  The optimistic track was a Grammy-award winner, and is a #1 favorite of many fans.  With the late Carlos Vega on drums, a live performance can be enjoyed on the “Live in Session” video, respectively on the “GRP All-Stars Live from the Record Plant video/DVD.

More earthy Latin enchantment follows with another Ivan Lins performance on “Before It’s Too Late,” which positively glows with passion. Insistent and  melodic , the scorching rendition is a knockout.  (He also sings it on the video/DVD “GRP All-Stars Live From The Record Plant.”)

Dave Grusin’s traditional “solo” is up next, but this time Lee Ritenour’s guitar plays along in such a sympathetic way that one feels nothing is missed from the usual intimacy of the pianist playing alone.  “Silent Message” Indeed offers the feeling of a cryptic communication which must be decoded.  There is a genuine cerebral element to the piece, as it progresses along, as if ponderously seeking an answer to a dilemma.  Entrancing and almost hypnotic, the romantic side of the piece is beautifully enhanced by the melodic guitar.
When the ensemble launches intoDon Grusin’s “Cats of Rio,” you know they’re talking about an ultra swinging lot.  With Latin rhythms enhanced by the percussion of Paulinho Da Costa, this is smooth jazz fused into a perfect and spirited package, from beginning to end. 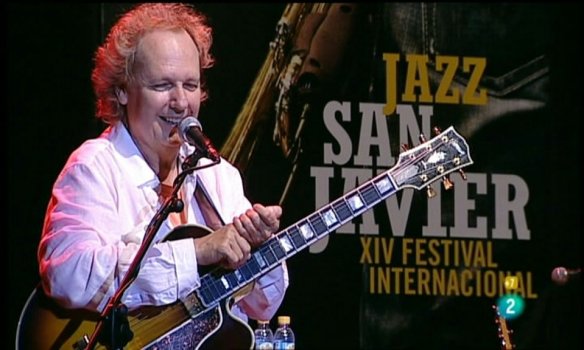 Ivan Lins returns on “Beyond The Storm,” which mixes the singer’s torchy vocals with a smooth-as-silk backing by Dave Grusin and Lee Ritenour, as well as sensitive percussion from Alex Acuna and Paulinho Da Costa.

The title of Lee Ritenour’s composition “Gridlock” almost seems an acronym for this quintessential smooth jazz, being the very opposite of caught up in tension. It’s more like an exquisite and delicately designed pattern.

Harvey Mason’s and Mike Lang’s “The Bird” provides a gentle and delightful finish to the album (with Mason himself on drums).  Summing up the moods and rhythms of the “Harlequin” project, it’s so beautifully balanced, you could leave this track playing on for hours.

The striking contribution of Ivan Lins on this album involves an interesting history.  At its roots is Lee Ritenour’s unending fascination with the music of Brazil.  He began collecting the singer-songwriter’s albums when recording “Rio” there in 1979, but missed a chance to meet the artist who was on tour at the time.  Meanwhile, his collection of Ivan Lins recordings was growing with his admiration. 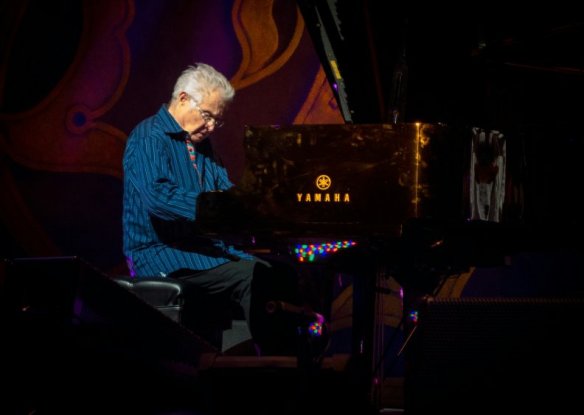 When Lee Ritenour shared the collection with Dave Grusin, it can be no surprise that the latter was equally enchanted.  For one thing, they knew they wanted to include some of the Brazilian’s songs on a joint venture they were planning.  The next inspiration was to invite him to sing on the album, and from this a wonderful  three-way friendship evolved.

So much so that when they decided to cap the “Harlequin” venture with an extensive tour, it seemed an impossibility to do so without the participation of Ivan Lins.  That tour (also including Diane Schuur and Dave Valentin), which began in Atlanta in May 1985, took the group across the US and Europe, and concluded in a filmed concert at the Record Plant in Los Angeles, the videos of which have been referred to above.

For those attracted to the musical tech side of things, “Harlequin” is interesting for the hybrid nature of instruments used by the principals.  Lee Ritenour is playing mostly the Yamaha classical guitar -mixed acoustically and plugged into amplifiers.  His secondary instrument of choice was a Gibson Chet Atkins classical electric guitar.

Besides using a variety of synthesizers and acoustic piano, Dave Grusin also enlisted Randy Goodrum’s midi acoustic piano (a combination acoustic piano which can trigger synthesizers).  As Lee Ritenour explains, “What ends up sounding like many overdubbed parts is in fact one performance. Once in a while, technology does help.” (Dave Grusin)