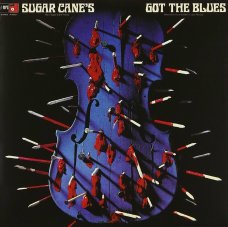 Violinist Don “Sugar Cane” Harris seemed to burst onto the scene with two appearances on Frank Zappa’s classic Hot Rats (Rykodisc, 1969), resulting in a flurry of recording activity that mysteriously died out by the mid-1970s. Got the Blues captures two electrifying performance at Berlin’s Philharmonic Hall from November, 1971, a potent combination of groove and improvisational freedom that makes Harris’ later disappearance from the scene (he passed away in 1999) all the more curious.

The quintet of musicians come from diverse backgrounds: from Britain, Soft Machine drummer Robert Wyatt and bassist Neville Whitehead, who traveled in similar circles; and from Germany, keyboardist Wolfgang Dauner and guitarist Volker Kriegel, two multi-disciplinary players comfortable across a broad spectrum of styles, one example being Kriegel’s work on The Dave Pike Set’s Live at the Philharmonie. Norwegian guitarist/ECM mainstay Terje Rypdal replaces Kreigel on Got the Blues’s most purely jazz-centric track, Horace Silver’s “Song for My Father,” which may sport the album’s most relaxed vibe, but still can’t seem to restrain Harris’ fiery delivery. 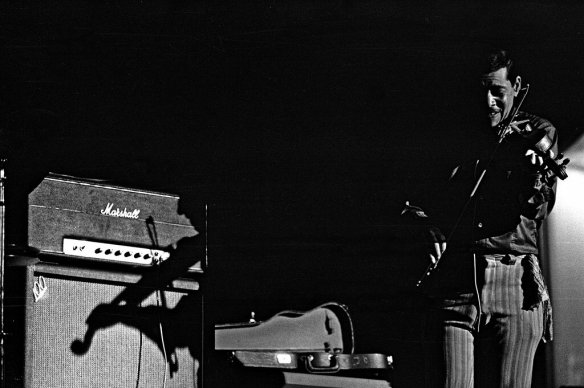 The balance of the disc’s four extended tracks belong to Harris. “Liz Pineapple Wonderful” may at first revolve around a simple set of changes and, later, a one-chord vamp, but it grooves mightily with relentless energy. In addition to a “burning down the house” solo from Harris, he also sings on the track, as he does on the pseudo-swinging minor-keyed title track which, after another introductory two-chord vamp, turns modal and double time for individual and in tandem solos from Dauner and Kriegel before a finale with everyone in the pool for three minutes of spirited free play. Harris also sings on the funky closer, “Where’s My Sunshine,” another lengthy vamp that morphs into a blues, with a surprisingly authentic piano solo from Dauner.

Harris’ unrelenting and passionate delivery keeps the excitement level high throughout, despite Got the Blues’ largely simple and vamp-based tunes. And while Kriegel’s jazz/rock tendencies are no surprise to those familiar with him, hearing the usually free jazz- 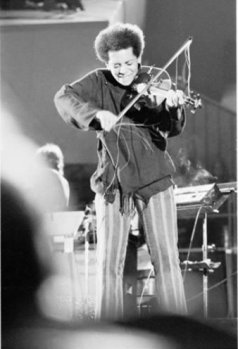 entric Dauner and Whitehead kick out the jams alongside Wyatt’s powerful drumming is an eye and ear-opener. In many ways, it’s this very multi-disciplinary nature of this collective that allows an album this compositionally spare to be so viscerally compelling. (by John Kellman)

Don “Sugar Cane” Harris’ drug addiction curtailed his career long prior to his death in 2000, but this performance at the 1971 Berlin Jazz Festival stands out as his best overall recording. Taped during the same day as the highly recommended New Violin Summit (which features Harris with fellow violinists Jean-Luc Ponty, Nipso Branther, and Michal Urbaniak), Harris delivers a terrific performance with his high energy “Liz Pineapple Wonderful”; “Sugar Cane’s Got the Blues,” a sometimes lyrical but often intense number featuring great solos by keyboardist Wolfgang Dauner and guitarist Volker Kriegel; the unusually structured blues “Where’s My Sunshine”; and finally an extended very percussive treatment of Horace Silver’s “Song for My Father,” during which Terje Rypdal takes over on guitar. Harris is clearly influenced by fellow violinist Stuff Smith on this outing with an often piercing sound and frequently fierce attack; he also has a somewhat hoarse singing style like Smith’s. This record has been difficult to find since BASF quit making records in the mid-’70s, but it is well worth acquiring and thanks to a reissue in 2008 by SPV, easier than ever. (by Ken Dryden) 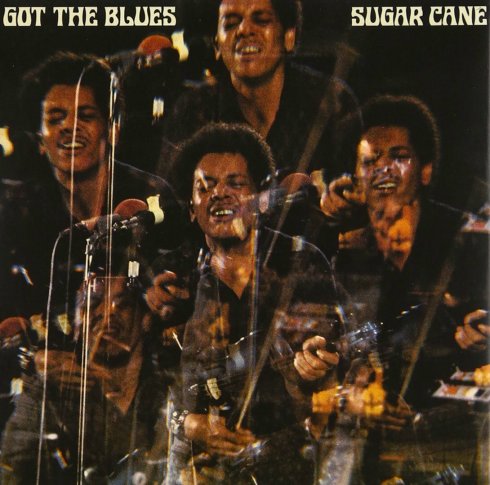 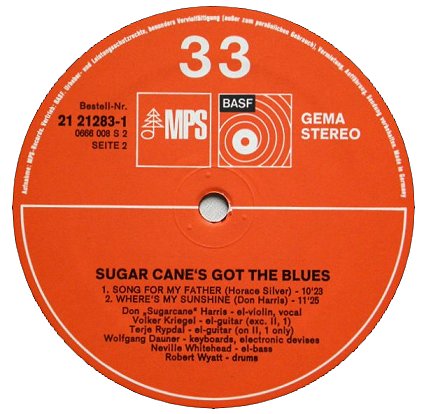 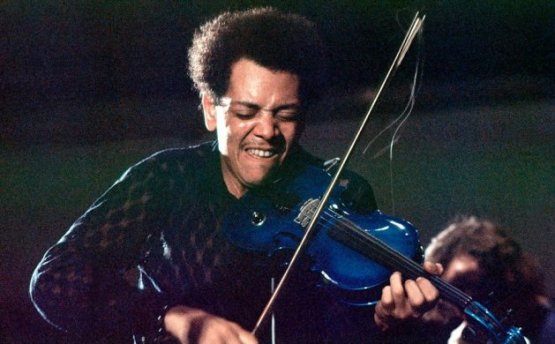 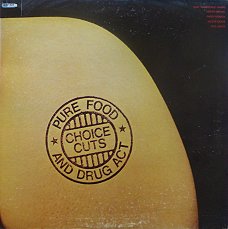 Pure Food and Drug Act (listed in The All Music Guide to the Blues,the Guinness Encyclopedia of Popular Music ) was a band that was formed in the early 1970s by Don “Sugarcane” Harris. The band began with Paul Lagos on drums, Larry Taylor on bass and Randy Resnick on guitar. Resnick was at that time experimenting with a one and two handed tapping technique which later became a standard guitarist’s tool. The group played small rooms in the Los Angeles area, such as the Troubadour and the Ash Grove, for several months.

While the band was searching for a record deal, Larry Taylor allegedly began to tire of Don’s constant lateness and irresponsibility and decided to continue his career with John Mayall. At the same time, Harvey Mandel, a Mayall alumnus, was brought in to beef up the accompaniment and to stimulate record label interest, as he already had a following from his Chicago blues days. To replace Taylor on bass, a relative newcomer, Victor Conte, was recruited from Common Ground, a funk band in Fresno that Resnick had played in. Conte went on to play in Tower of Power and with Herbie Hancock in his Monster Band. 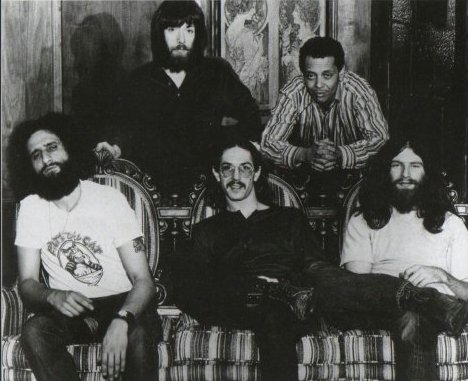 Choice Cuts was the band’s only album, recorded live in Seattle in 1972, but it was mostly unsuccessful. Allegedly because of Don’s unreliable nature, the band rarely rehearsed. Live performances included extended solos and improvised ensemble sections, and one song would often last 20 minutes or more. Various line-up changes took place until the band broke up a few years after releasing its first album. (by wikipedia)

Mighty choice work from Pure Food & Drug Act – a studio supergroup with a heavy blues rock approach – thanks to heavy guitar from the great Harvey Mandel, and vocals and electric violin from Don Sugarcane Harris! The rest of the lineup is nice too – a quintet with Randy Resnick on rhythm guitar, Victor Conte on bass, and Paul Lagos on drums – but the real stars of the show are clearly Mandel and Harris, especially the former – as his presence here has a searing intensity that maybe even beats some of his own full albums of the time. Lots of long tracks… and yes it sounds ike a great jam session … 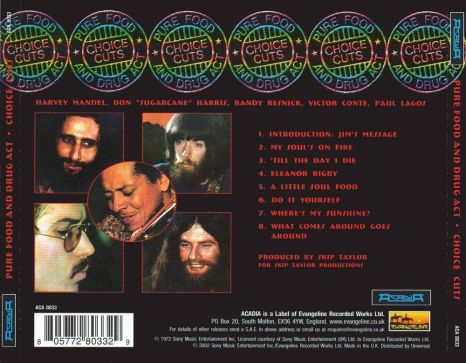 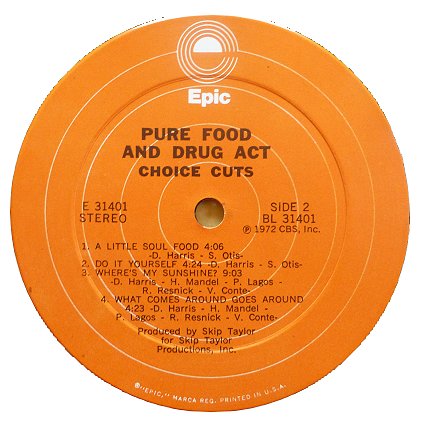