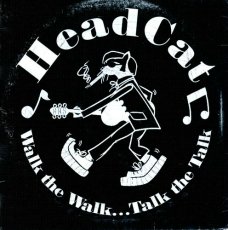 The Head Cat is an American rockabilly supergroup formed by vocalist Lemmy (of Motörhead), drummer Slim Jim Phantom (of The Stray Cats) and guitarist Danny B. Harvey (of Lonesome Spurs and The Rockats). As of 2017, former Morbid Angel member David Vincent took Lemmy’s place as vocalist and bassist.

Head Cat was formed after recording the Elvis Presley tribute album Swing Cats, A Special Tribute to Elvis in July 1999 to which the future band-mates all contributed. After recordings were finished they stayed at the studio and Lemmy picked up an acoustic guitar and started playing some of his old favorite songs by Johnny Cash, Buddy Holly and Eddie Cochran.[3] The rest of the guys knew them all and joined in.[4] The name of the band was created by combining the names Motörhead, The Stray Cats and 13 Cats, which resulted in The Head Cat, similar to what Lemmy did in 1980 with Headgirl, a collaboration between Motörhead and Girlschool.

In 2006, the band released their first studio album on Jun 27, Fool’s Paradise, which was a re-release of an earlier album titled Lemmy, Slim Jim & Danny B recorded in September 1999 but Fool’s Paradise doesn’t include 3 songs from first release and track list is in different order, sleeve is different as well and they used name The Head Cat for first time. It included cover songs from artists such as Buddy Holly, Carl Perkins, Jimmy Reed, T-Bone Walker, Lloyd Price, Elvis Presley and Johnny Cash.

On the recordings Lemmy played acoustic guitar in live performance too like on “Rockin’ At Cat Club” only live album they had, on live performances Lemmy uses his signature Rickenbacker bass in later years saying “I’m just not that good on guitar”. Live album “Rockin At Cat Club” have almost all different songs from other two studio albums. Before that re-release, a DVD of a live performance was released on 25 April 2006, album was recorded in on Tuesday Jan 13 2004 and was released in 2006 on limited Vinyl 322 copies too. Filmed at the Phantom’s Cat Club on Los Angeles Sunset Strip and which included 13 live songs and interviews with the band.

The band’s second studio album (or third altogether), Walk the Walk…Talk the Talk, was recorded by the Niji Entertainment Group in June 2010, released in 2011. This was the first new material by the band in eleven years, following up from the Lemmy, Slim Jim & Danny B album in 1999. It has two original songs “American Beat” and “Eagles Fly On Friday”. First album was all acoustic, Lemmy was on rhythm guitar, harmonica and vocals. Second album, live album, was half acoustic, Lemmy was on acoustic guitar but Danny B was on electric guitar. Third album (second studio) was all electric, Lemmy played bass like in Motorhead. In 2016 Cleopatra Records re-released live album “Rockin At Cat Club” on vinyl with different sleeve from original release and for first time on CD three panel digipak. (by wikipedia)

While Lemmy Kilmister was best known as an innovator in heavy metal with his over the top band Motörhead, he was around to witness the early days of rock & roll. The Head Cat was a side project that allowed Lemmy to indulge his passion for rockabilly and first-era rock. The Head Cat featured Lemmy on bass, guitars, and vocals; Slim Jim Phantom of the Stray Cats on drums and vocals; and Danny B. Harvey of the Rockats and the Lonesome Spurs on guitar, bass, and keys. The trio came together when Lemmy was invited to contribute guitar and vocals for the 2000 album A Special Tribute to Elvis by Phantom and Harvey’s group the Swing Cats. After cutting a version of “Good Rockin’ Tonight,” Lemmy picked up a guitar and began jamming on some classic Eddie Cochran tunes. Phantom and Harvey quickly joined in, and the three felt the chemistry was right and they should cut an album of their own. 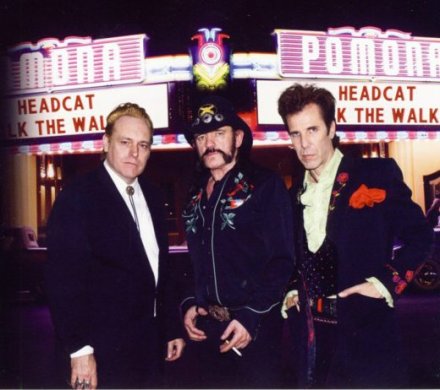 In 2000, the trio recorded Lemmy, Slim Jim & Danny B, which was released by the German label Steamhammer; it was reissued in a different sequence and with new artwork in 2006 by Cleopatra Records under the title Fool’s Paradise. The band played occasional live dates when their schedules permitted, and a 2004 show in Los Angeles was released in a special DVD/LP package, 2006’s Rockin’ the Cat Club: Live from the Sunset Strip. In 2011, the Head Cat brought out a second studio album, Walk the Walk…Talk the Talk. While the debut album consisted entirely of vintage rock & roll covers, Walk the Walk featured a pair of original numbers along with ten rockabilly, blues, and country chestnuts.

The Head Cat continued to play occasional club and festival dates until early 2015, when

Lemmy’s failing health began to interfere with his performance schedule. The Head Cat were scheduled to perform as part of a Lemmy birthday show on December 13, 2015, but Kilmister was too ill to participate. He died on December 28, ending the trio’s memorable run. (by Mark Deming)

It’s been a while since listeners last heard from the HeadCat, Lemmy Kilmister’s rock & roll side project. And now, five years after the release of their debut, Fool’s Paradise, comes their sophomore effort, Walk the Walk…Talk the Talk. Joining the Lem-man once more are Stray Cats drummer Slim Jim Phantom and Rockats guitarist Danny B. Harvey, and again, the trio has cooked up a rockin’ good time, heavy on readings of classic rock & rollers from yesteryear, cases in point being several tracks that were later covered/made famous by rock royalty — the Chuck Berry obscurity “Let It Rock” (later covered by the Rolling Stones), Johnny Kidd & the Pirates’ “Shakin’ All Over” (later covered by the Who), and an album-closing rendition of Robert Johnson’s “Crossroads” (later covered by Cream). And Lemmy’s trademark throaty growl works better than you’d think in the context of old-time rock & roll, as he takes it down a few notches on such ditties as “I Ain’t Never” and “The Eagle Flies on Friday.” As with the HeadCat’s debut album, Walk the Walk…Talk the Talk is a much welcomed arrival in a period that will undoubtedly go down as “the Auto-Tune era,” when the original thrill of raw and real rock & roll has been all but replaced by computer-perfected blahness. (by Greg Prato)

And their version of the Robert Johnson classic “Crossroads” was of course inspired by the legendary Cream !!! 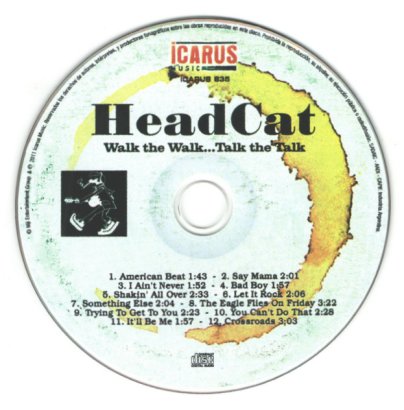