In 1986, two of Europe’s most renowned Rhythm & Blues artists, Colin Hodgkinson (B/Voc) and Frank Diez (Git), joined ranks to create a Premier League formation; The Electric Blues Duo. Always striving for excellency, these two friends and legendary figures combined decades of experience and devotion into promoting the music they love- The Blues.

How many bass players have backed Jeff Beck, John Lord and Jan Hammer, toured with the likes of Whitesnake, Joan Baez and Mercedes Sosa and recorded with Mick Jagger? Only one! Colin Hodgkinson. Knocking around London during the “Swinging Sixties”, Colin became a pioneer on the electric bass and made a lasting contribution to the then emerging Blues/Rock scene. His distinctive approach – incorporating flatpick and fingerpicking elements to move bass lines against melodie lines – forever changed the approach to the instrument. This, combined with his rugged and reliable vocals, render him a stand-alone bass artist. A feat none of his contemporarys accomplished.

Always well ahead of his time, Frank Diez is probably the only German guitarist who shared stages with Jimi Hendrix, Chuck Berry and Little Richard. Considering his contribution to bands such as “Randy Pie”, “Atlantis” or Eric Burdons “Fire department” and his revolutionary work with the German heavy weights Peter Maffay and Udo Lindenberg, Diez can rightfully claim to have introduced the electric guitar to a wider German audience. An inspired player, Frank’s tone is utterly Blues approved and his sizzling over-the- top solos render him in a class all of his own.

The Electric Blues Duo. Two of Europe’s most influential artists, combining a long lasting friendship with decades of dedication and live experience, are the assurance of a great performance.

Two outstanding musicians, Frank Diez on guitar and Colin Hodgkinson on bass and with a striking voice, that´s all it takes to cook this tasty first class blues-stew.

Colin Hodgkinson founded the jazz-rockband “Back Door” in 1970 together with Ron Aspery and Toni Hicks. His biografie sounds like the who is who in the history of rockmusic, for example for half of his life he was the duo-partner of the farther of the white Blues Alexis Corner. Hodgkinson has toured with Emerson, Lake & Palmer, J. Geils Band and Whitesnake, to name only a few, he played bass in the bands of Jeff Beck, Jon Lord and Jan Hammer and was engaged for Mick Jagger´s solo-album “She´s the boss”. In 1986 he met the German guitarplayer Frank Diez at a session with Konstanatin Wecker. When Colin asked Frank about Konstantin Wecker: “What kind of music does he play ?” Frank´s answer was: “Some kind of Bavarian Blues”! That was the beginning of a still lasting friendship and their sympathy for the Blues made them found the Electric Blues Duo.

Frank Diez is one of the world´s finest bluesguitarists of his generation. He was one of the foundation members of bands like “Emergency”, “Karthago”, “Eric Burdon Firedepartment”, “Ihre Kinder”, “Atlantis” and “Randy Pie” and is probably the only German, who´s ever played guitar on stage with Jimmy Hendrix, Chuck Berry and Little Richard. Moreover he has worked with the most popular German bands like Peter Maffay and Udo Lindenberg. 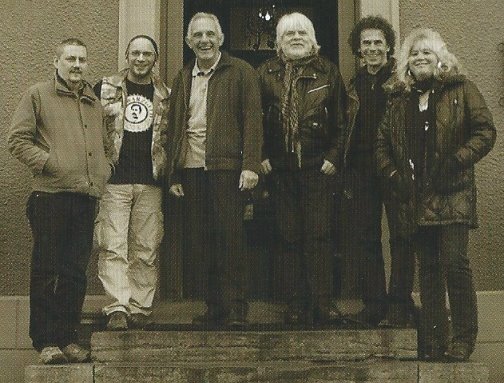 This is the latest CD from this fantastic duo, this time together with one the best German blues harmonica Albert Hofherr. And it´s an exciting blues-album, listen to this extraordinary blues – duo … the sound is unblieveable ! Recorded live at The L’Inoui. 67 grand rue, Redange, Luxembourg.

This aptly named establishment (inoui is French for “unheard of”) is definitely the best place to enjoy jazz in the whole of Luxembourg. The interior of this former train station hotel opened in 1895 by the grandparents of the current owners, has been renovated in a very distinct style, using some of the original features, such as the bar. Quality of sound and lighting is exellent, and the cuisine is delicious]