Randy Holland (1943-2011) was born in Boulder, Colorado and was raised in Kansas City, Missouri, and Westfield, New Jersey. Randy was an art and music advocate his whole life. His album “Cat Mind” was a four star pick in Billboard in 1972. This is a very nice rock release, with some folk and country inflections, and a good loner vibe. It’s not (contrary to some catalogues) psychedelic, but Hollands’ dark and somewhat snotty delivery and some smokin’ guitar make it stand out from the pack. (by discogs.com)

There are many different kinds of records. Some latch onto you almost immediately and either stand the test of time or else slip away as easily as they came. Randy Holland’s 1972 album Cat Mind is the other kind; those unusual and sometimes uneven records that take more than one listen to fully appreciate. Released on the independent Mother Records label, it can probably be said that Cat Mind never had a chance at real commercial success. But hell, we’re not interested in the commercial success here – we’re after good records, wherever they ended up and in whatever condition. And Cat Mind is a good record.

Looking at that stark, black and white cover shot you’re probably expecting a good deal of grit here, and the opening cut doesn’t disappoint in that department. The off-kilter flower child stomp of “Bless the Naked Days” also wastes no time introducing the listener to Holland’s rough and nasally voice; a voice which he tends to push to the limits, and often far beyond. Depending on where you’re coming from, I reckon this could either be an acquired taste or a real attraction.

Following this first number, “Colors of Sad” is bizarrely saccharine, and it’s this vivid contrast between wildness and melancholy which perhaps defines this record more than anything else. Holland tilts mercilessly between incisive, jagged rock and roll numbers and melodramatic country cuts, with very little sense of transition or artistic compromise. His uncredited backup band really shines, especially on the former, where they lay down some of the most righteous country-stained rock this side of
Wray’s Shack Three Track. The hot swamp growl of “Muddy Water” is a real highlight, as is the weird title track, graced with scorching Davie Allan-style guitar work and an insistent rhythm section. Holland’s forays into the tamer side of Americana are more hit-and-miss, giving us both the warm and gentle “Ladybug” and an unfortunately overwrought reading of Mickey Newbury’s “Remember the Good”. 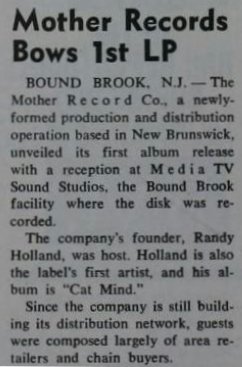 Fortunately, however, even the most underwhelming cuts are outweighed by the grittier numbers, and the overall quality and unique character of Cat Mind really does warrant it the kind of reissue treatment afforded so many other lost jewels of the period, such as Vernon Wray’s Wasted. As it stands, it isn’t all that hard to track down a used copy for a decent price. And what ever happened to Randy Holland? 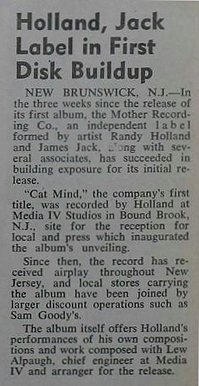 From what it looks like, he retired his attempts at making it in the music scene not long after cutting this record and moved to Las Vegas, where he opened an art gallery and devoted the rest of his days to painting and poetry. He passed away a few years ago, truly making this his one and only album. (by therisingstorm.net)

All articles in this entry are from the Billboard Magazine, 1972 and I would like to dedicate this entry to all these beautiful loosers in the history of Rock music. 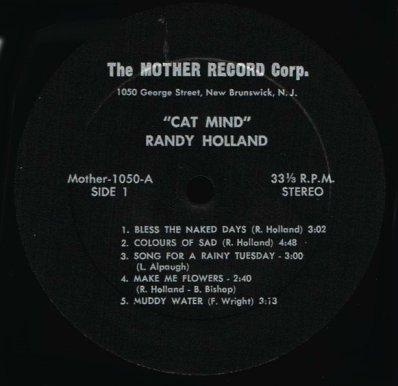 Randy Holland passed away Jan. 7, 2011. He was born in Boulder, Colo., in 1943, was raised in Kansas, Mo., and Westfield, N.J. He attended the University of Denver where he majored in philosophy. His mother, Cobbie Holland, was an excellent amateur artist who won many awards in New Jersey and regional competitions. Randy was an art and music advocate his whole life. His album “Cat Mind” was a four star pick in Billboard in 1972. While his business life turned to the Casinos of Las Vegas in 1977, where he remained until 1995, his artistic life in music and art remained active. He owned and operated the

Temecula Art Gallery in Temecula, Calif., from 1995-1999. During the course of three short years, the Gallery provided the community with top notch art shows, a wide variety of performing art, as well as support for the many assistance organizations in the valley. He was past-president of the Arts Council of Temecula Valley; on the board of The American Cancer Society, and Dorland Mountain Arts Colony. He was appointed by the City of Temecula to the Old Town Redevelopment Advisory Committee, and was a 1997 Temecula “Good Neighbor.” Randy is survived by his brother, Dutch Holland; his daughter, Robbie Hansen, her husband Joel, and grandsons, Dylan and Tristan all of Las Vegas. He also has two sons, Mark in Reno, and Shawn in Phoenix, with two more grandchildren Madison and Sawyer. (obits.reviewjournal.com)