Nervous Night is the second studio album by American rock band the Hooters, released in May 1985 by Columbia Records and on CBS Records in Europe. The album features two of the band’s biggest and best-known hits, “And We Danced” and “Day by Day”, as well as the minor hit, “All You Zombies”, which was a rerecorded version of a single that had first been released in 1982.

In the summer of 1983, guitarist Eric Bazilian and keyboard player Rob Hyman were invited by their old college friend and bandmate from Baby Grand, Rick Chertoff, to work on the debut album for a newly signed singer to Columbia Records named Cyndi Lauper. This resulted in The Hooters reforming after having broken up several months earlier. Eventually executives at Columbia Records, who were impressed by the over 100,000 copies that the band’s independent album Amore had sold, as well as the local Philadelphia fan support (26 million entries in radio station WMMR’s contest to win a Hooters show at a local high school) decided on July 26, 1984 at the Four Seasons Hotel in Philadelphia, to sign The Hooters to a multi-album contract to the company.

On July 13, 1985, The Hooters opened the Philadelphia segment of Live Aid, a concert event to raise funds to benefit Africa. This internationally televised event introduced the band to a global audience that subsequently translated to major commercial success. Their first major overseas tour came later that year when they played throughout Australia.

Different versions of three songs on Nervous Night — “All You Zombies”, “Hanging on a Heartbeat” and “Blood from a Stone” — were originally released on The Hooters’ independent album release Amore in 1983. “Blood From a Stone” had also been recently covered by Red Rockers and released as a single.

Eric Bazilian told Songfacts that “Day by Day” “was a song that started as an experiment with Rick Chertoff.” He added that it took them “2 years whipping it into shape.”

An award-winning film starring The Hooters and directed by John Jopson, Nervous Night, was produced by Bell One Productions. Nervous Night was shot on 35mm film and intercuts two separate elements: a concert filmed at the Tower Theater in Philadelphia, and a series of short films, each one starring a different band member.
Awards

Nervous Night achieved platinum certification status around the world, selling in excess of 2 million copies in the United States.

On September 5, 1986, The Hooters appeared on the 1986 MTV Video Music Awards, where they were nominated in the category of Best New Artist in a Video for “And We Danced”. They performed two songs on the show, “And We Danced” and “Nervous Night”.

Rolling Stone named The Hooters the Best New Band of the Year for 1986. (by wikipedia)

Often overlooked, the Hooters’ Nervous Night was a defining record not only for the band, but for 1985 itself. Filled to the brim with fun, danceable new wave-ish rock, the album is a wonderful representation of a lighthearted era. The peppy vocals of keyboardist Rob Hyman and guitarist Eric Bazilian give the band an assured, happy energy, while the sporadic use of the mandolin and melodica (a combination harmonica/keyboard) gives the group its distinctive sound. “And We Danced” and “Day by Day” became instant pop hits, but the remainder of Nervous Night is almost as strong. “All You Zombies,” which refers to stories in the Bible, is the band’s most powerful moment; along with “Where Do the Children Go,” the track showed that the Hooters could be serious and dramatic as well as upbeat. Although the band wasn’t able to maintain its momentum with subsequent records, Nervous Night remains a noteworthy contribution to mid-’80s rock and doesn’t sound quite as dated as the work of some of the band’s contemporaries. (by Kenyon Hopkin) 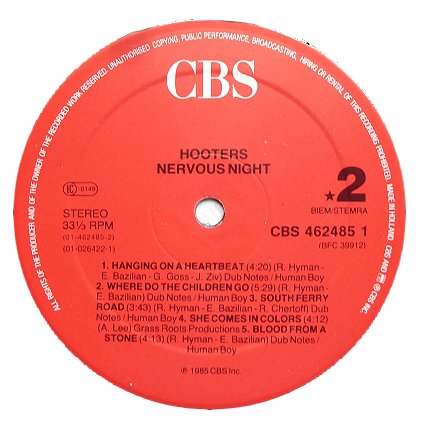