Twist of Jobim contains a single disc with 11 songs. The CD has an unusual multi-artist tribute to the music of Antonio Carlos Jobim. Some of the Twist of Jobim songs are made funky (but in a melodic and tasteful way), while others become quiet (but still passionate) ballads. Twist of Jobim are all jazz-oriented songs.

The debut release from the I.E. label (which is connected with Polygram) is an unusual multi-artist tribute to the music of Antonio Carlos Jobim. Some of his tunes are made funky (but in a melodic and tasteful way), while others become quiet (but still passionate) ballads. The treatments are all jazz-oriented, and there is plenty of solo space for the likes of guitarist Lee Ritenour (in one of his finest jazz efforts), pianists Dave Grusin and Alan Pasqua, altoist Eric Marienthal, bassist Christian McBride, and tenor saxophonist Ernie Watts. Plus, there are guest spots for Herbie Hancock (an excellent acoustic piano solo on “Stone Flower”), the sopranos of Art Porter (on “Dindi”) and Steve Tavaglione, the Yellowjackets (who team up with Ritenour on “Mojave”), singer El DeBarge (“Dindi”) and the vocal duo of Al Jarreau and Oleta Adams (“Waters of March” and a lightweight rendition of “The Girl from Ipanema”). Nearly every song holds one’s interest, the melodies are celebrated, and the fresh interpretations contain more than their share of surprises. (by Scott Yanow) 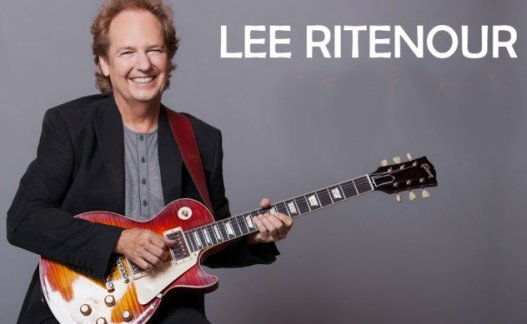 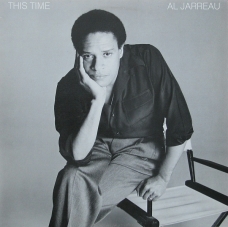 This Time is the fourth studio album by Jazz vocalist Al Jarreau, released in 1980 on Warner Bros. Records. The release marked a change in Jarreau’s sound to a more R&B-oriented flavor. As a result, the album achieved more success on the mainstream charts than his previous works, while also topping the Jazz Charts. It also reached #6 on the R&B charts and #27 on the Billboard 200.” In 1981 “Never Givin’ Up” gave Jarreau a Grammy Award nomination for Best R&B Vocal Performance, Male.

This Time marked Jarreau’s first foray into the top 40 on the Hot 200 or top ten on the R&B charts, as well as his first #1 on the Jazz charts. His next album would prove even more successful, topping both the Jazz and R&B charts.

“Never Givin’ Up” received a Grammy Award nomination for Best R&B Vocal Performance, Male in 1981, Jarreau’s first nomination in the R&B field. It lost to Jarreau’s Warner Bros. labelmate George Benson for the Give Me the Night album, who had recently undergone a similar change in sound. (by wikipedia)

Al Jarreau finally found success in the U.S. after 1975’s We Got By. The later albums that followed ,like 1977’s live Look to the Rainbow and 1978’s All Fly Home found him attaining the all-important cult status and accolades from the jazz community. Those facts made his switch to pop/R&B on This Time even more surprising. For This Time, Jarreau is paired with producer Jay Graydon. Despite his jazz credentials, This Time does prove that this style is where Jarreau truly prospers. The jittery “Never Give It Up” and the melodic and pensive “Gimme What You Got” have a crisp and refined L.A. sound, and Jarreau gives the songs weight with his methodical yet playful vocals. In the same vein, the poignantly sung and arranged “Your Sweet Love” displays Jarreau’s gift of ringing emotion where you’d least expect it. Jarreau also adds deft lyrics to jazz standards “(A Rhyme) This Time” and “(I Can Recall) Spain.” The best song to bridge the gap between the two incarnations, “Alonzo,” is strikingly beautiful and has Jarreau nearly reaching operatic heights. During its release, This Time was stunning for its fresh sound and a sense of warmth. Upon repeated plays, those attributes still ring true. (by Jason Elias) 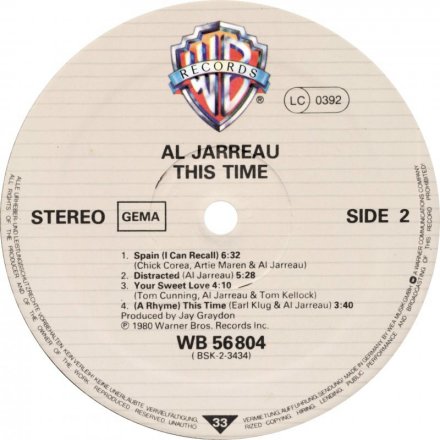 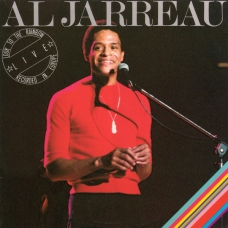 Look to the Rainbow is a live album by Al Jarreau, released on May 27, 1977 by Warner Bros. Records. It marked a breakthrough for his career in Europe and later also in the US. It won the 1978 Grammy Award for Best Jazz Vocal Album.
In 1976 Jarreau made his first live appearances in Europe, starting with concerts at the jazz festivals in Montreux and Berlin. The following year he began his first tour through 16 cities in Europe starting with a gig at Onkel Pö’s in Hamburg. Look to the Rainbow is a set of recordings from that tour.
The title song “Look to the Rainbow” is from the musical Finian’s Rainbow, a Broadway production from the late 1940s. The most recognized song on this album is Jarreau’s interpretation of Paul Desmond’s classic jazz number “Take Five”, which was also released as a single in an edited version in 1977.
Both tour and album brought him enthusiastic reviews in Germany, where he immediately became a darling of the public, while his recognition in the US remained low until he received his first Grammy in 1978.
Look to the Rainbow is a jazz-oriented album which is characterized by a unique light and open sound. With no guitar or brass instruments, accompanied by Tom Canning’s Fender Rhodes (in some places supported by an ARP String Ensemble) and Lynn Blessing’s vibraphone, Al Jarreau’s voice is the main lead instrument and he uses it intensely as such.
Allmusic states that of the albums from Jarreau’s Warner Brothers period, this is “easily the most jazz-oriented”. It further cites his abilities “as a brilliant scat singer (able to emulate practically any instrument)” and also a “superior ballad interpreter” as evident on this recording.
Reviews in the UK’s music press were mixed. Melody Maker was full of praise for the album, claiming that Jarreau “has taken the seemingly well-worn genre of the freely improvising jazz singer and conjured it, miraculously, back to life”. The review observed that “like all the best artists, Jarreau does not work in a vacuum, but as the successor to a great tradition. When he performs, you can hear the expected echoes of King Pleasure and Jon Hendricks, upon whose foundation he is building so sensationally, and you can also hear a number of contemporary singers, mostly black, with whom he is so obviously in touch.” It concluded, “There is not one second of the four sides that is not the purest magic… at last, [Jarreau] has an album worthy of his monster talent”.

Sounds also gave the record a positive review, stating that “Al’s always crisply precise: intense but not passionate up until the climax of, say, ‘Take Five’, when his scat shoots blind/wild, like a flock of demented starlings whizzing round a cage”, and describing the album as “a great sophisticates’ record, sensual petals of music unfold and furl again with Cartier elegance”. However, NME was less enthusiastic, saying that “Look to the Rainbow is a good representation of Jarreau live. It’s relaxed and intimate, the mood hardly varies throughout and the pace never gets more frantic than a light, funky backbeat that creeps in for some of the songs… The result is homogenous and patently easy to listen to. Therein lies the problem. If you weren’t looking for a memento of Jarreau’s concert […] there wouldn’t be much here to attract attention. Jarreau’s unusual voice is at first beguiling, but soon becomes gimmicky, like a hipper male version of Cleo Laine. When he gets funky (as on ‘So Long Girl’) there’s little to complain about but on the slower songs the combination of his voice and the milky sentimentality becomes irritating… Look to the Rainbow is too close to MOR for comfort.”

In Germany Der Spiegel stated, “In a deliberately confusing game of phrases and syllables tone-figures become meaning, words transform into pure sound”).
Die Zeit was also enthusiastic: “It wouldn’t surprise us if we’ve seen the new Sammy Davis Jr. arrive on the scene”). (by Wikipedia)
The Grammy-winning jazz singer Al Jarreau died on Sunday in a Los Angeles hospital, days after announcing his retirement from touring due to exhaustion.
Jarreau was taken to hospital earlier in the week and was said to have been improving slowly. His official Twitter account and website said he died around 6am local time. He was 76.
A statement posted to Facebook said Jarreau “passed away this morning. He was in the hospital, kept comfortable by his wife, son, and a few of his family and friends. A small, private service is planned, for immediate family only. No public service is planned yet this time”.(by theguardian.com) 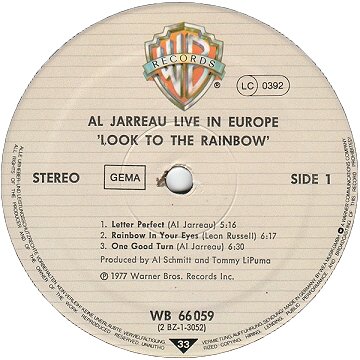 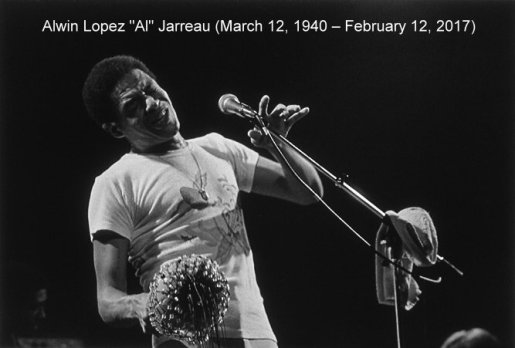 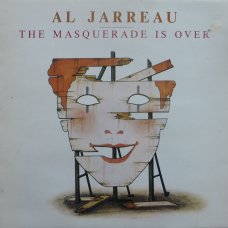 More than ten years before he began to receive notice, Al Jarreau sat in with some friends in Illinois and recorded this superb album, his only strictly “pure jazz” recording to date. Accompanied by pianist Cal Bezemer, bassist Gary Allen and drummer Joe Abodeely, Jarreau already sounded quite recognizable. He comes across as a superior jazz singer on such numbers as “My Favorite Things,” “A Sleeping Bee” and “One Note Samba,” making this little-known LP (not yet reissued on CD) the high point of his jazz career, even though he apparently was not happy with its release over 15 years later. The album shows what could have been had Al Jarreau had the desire to be a jazz singer rather than chasing the money. (by Scott Yanow) 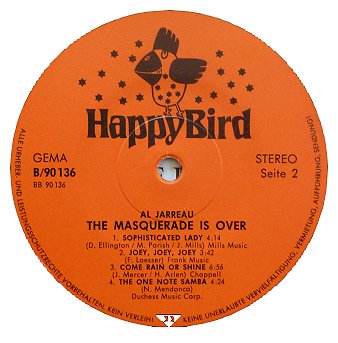