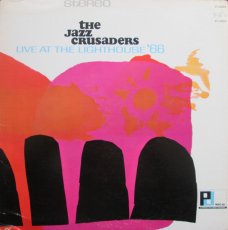 Live at the Lighthouse ’66 is a live album by The Jazz Crusaders recorded in 1966 and released on the Pacific Jazz label.

Because the Jazz Crusaders in the early ’70s dropped the “Jazz” from their name and later in the decade veered much closer to R&B and pop music than they had earlier, it is easy to forget just how strong a jazz group they were in the 1960s. This CD reissues one of their rarer sessions, augmenting the original seven-song LP program (highlighted by “Blues Up Tight,” “Doin’ That Thing,” and “Milestones”) with previously unissued versions of “‘Round Midnight” and John Coltrane’s “Some Other Blues.” The Jazz Crusaders (comprised of tenor saxophonist Wilton Felder, trombonist Wayne Henderson, pianist Joe Sample, drummer Stix Hooper, and, during this period, bassist Leroy Vinnegar) are heard in prime form. Felder shows the strong influence of Coltrane, Henderson recalls J.J. Johnson, Sample displays the most originality and the quintet on a whole (with its tenor-trombone frontline) sounds quite distinctive. An excellent set of primarily straight-ahead (but soulful) jazz. (by Scott Yanow)

One of the most outstanding hard-bop albums ever recorded, by a group of relative unknowns outside the west coast (and, because of location, NOT recorded by Rudy Van Gelder!). Some of the solos are still jaw-dropping after hundreds of listens. What a shame this band changed musical directions. Even the Live at the Lighthouse ’68 is nowhere as good as this record. (by Philip Abromats) 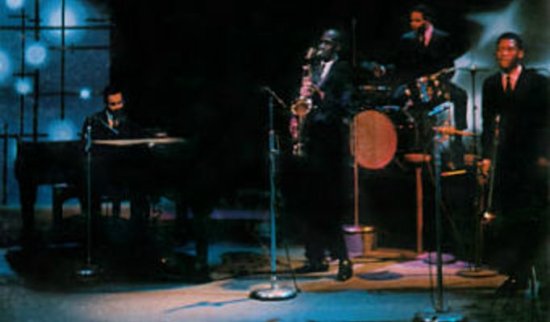 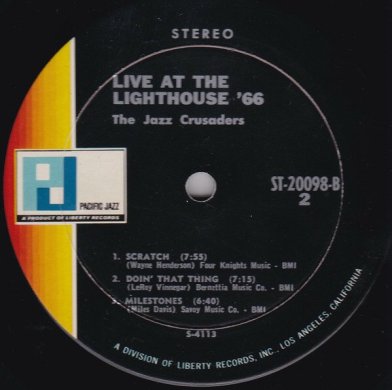 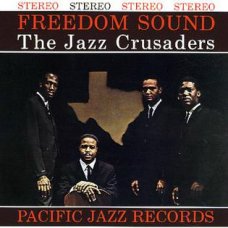 The first album by the Jazz Crusaders (which started an extensive series for Pacific Jazz) introduced the colorful quintet. With trombonist Wayne Henderson and tenor saxophonist Wilton Felder giving the ensembles a unique sound, the group (also featuring regular members pianist Joe Sample and drummer Stix Hooper along with guests Jimmy Bond on bass and guitarist Roy Gaines) managed to strike a balance between creative hard bop and accessible soul-jazz. In addition to their version of “Theme From Exodus” (hoping to jump on the bandwagon created by Eddie Harris’ hit rendition), the Jazz Crusaders perform originals by Felder, Henderson, and Sample (“Freedom Sound”) (by Scott Yanow)

The Jazz Crusaders emerged onto the West Coast scene from Texas at the beginning of the sixties and this C.D. consists of their first two L.P.’s together with a couple of bonus tracks. I first heard them on a sampler track from an L.P.of Pacific Jazz tracks, now no doubt long gone, and was much taken by their sound. Unfortunately they moved fairly rapidly into pop and soul music, dropping the ‘Jazz’ part of their name. Although commercial success followed the goodly sounds of their first two discs were never repeated.
The music is almost all rocking blues based swingers played with energy and a great deal of skill. A lot of it is soulful, as was much modern jazz at the time. It is obviously jazz from Texas, and Wilton Felder, the main soloist, joins a long and honourable line of Texas tenors, along with such men as Harold Land and Curtis Amy. If you are an afficionado of that type of swinging blues based jazz you will like this. 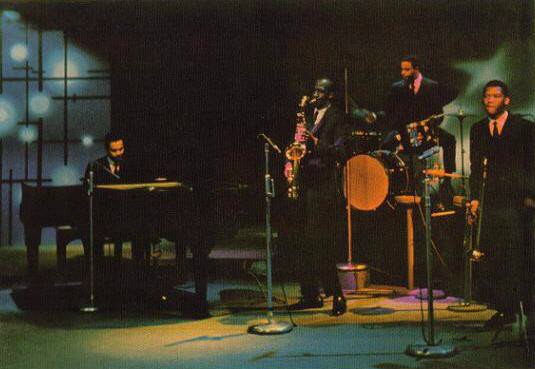 Felder plays vigorous bustling tenor and is joined in the front line by Wayne Henderson on trombone. He has a full, almost fruity sound, with a lot more tonal variation than most modern trombonists of the time. They blend together well to produce a full ensemble sound. Both have ample technique without unecessary display and swing relentlessly. Had both stuck at the jazz they would have been major players.
Joe Sample on piano is slightly less impressive. He has an easy swinging style, a little like a mixture of Oscar Peterson and Wynton Kelly, but lacking Peterson’s overwhelming technique and Kelly’s uncanny ability to place a note precisely where it should be rhythmically. The last half of his solos often consists of a succession of block chords. Stix Hooper, the drummer, and the last member of the band who travelled from Texas is a fine swinging and fairly straightforward drummer, eminently suitable for the band. On the West Coast they picked up Jimmy Bond who appears on both sessions and provides a firm foundation for all the swinging going on around him. On two tracks Roy Gaines,a guitarist from Texas is added. His sound fits in but his solo ability is limited.
Foot tappin’ bluesy jazz, so what is there not to like? (by an amazon customer) 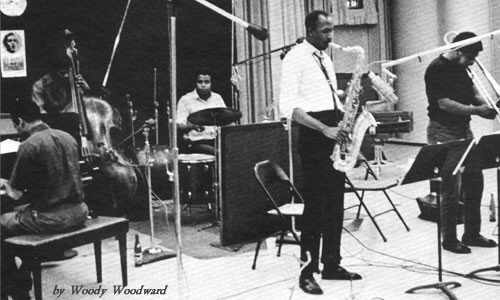 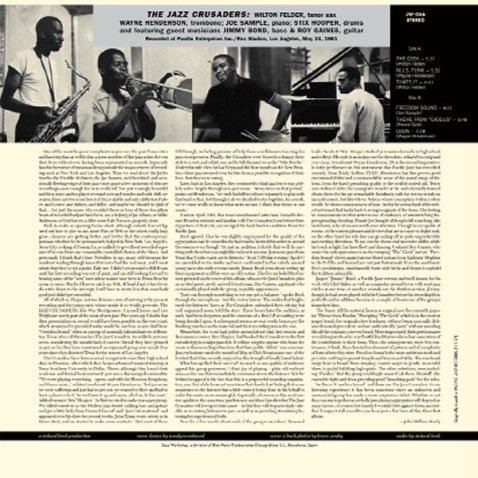 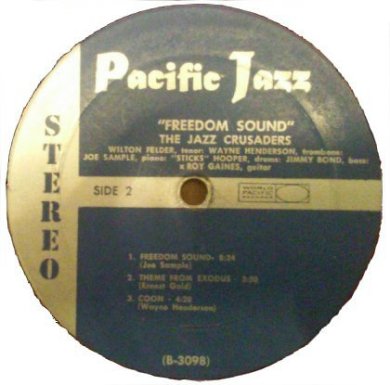