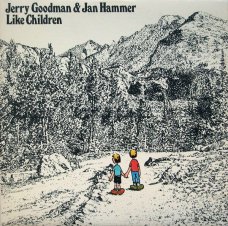 Like Children is a collaborative album between two past members of the ground-breaking and highly influential Mahavishnu Orchestra, keyboardist Jan Hammer and violinist Jerry Goodman. In 2006 this album was re-released on CD. The original album was released in 1974 by Nemperor Records.

“At times, the album sounds like a forgotten work-in-progress from the Mahavishnu Orchestra, not surprising given that it was recorded solely by two of its five members not long after the original line-up’s acrimonious split (a third former member, bassist Rick Laird, contributed a song),” said Vincent “Vicente” Rodriguez, former pop music critic at the Dallas Morning News.

“The best two tracks are ‘Steppings Tones’ and ‘Country and Eastern Music.’ The former sounds like it could be an outtake from either of the Orchestra’s first two albums. It’s a moody, soulful track that allows Goodman to shine on the violin with Hammer adding a soft keyboard arrangement in place of what would surely have been Orchestra leader John McLaughlin’s delicate acoustic picking. Goodman’s crisp, textured playing is also a reminder that he could not only keep up with McLaughlin’s light-speed electric guitar runs, but that he also served as an effective counterpoint to McLaughlin during the quieter moments.

“The catchy and infectious ‘Country and Eastern Music’ is the album’s strongest song. The upbeat track illustrates that McLaughlin should’ve allowed the other members to share in the song-writing duties from the outset,” added Rodriguez. “He finally did in ‘The Lost Trident Sessions’ that was released twenty-six years after it was recorded and would’ve been the original line-up’s third studio album.”

Unfortunately, the internal strife had taken its toll before that album could be completed, so they instead released the live album “Between Nothingness and Eternity.” It contains “Sister Andrea,” a Hammer composition that was the only non-McLaughlin song released by the original line-up during its early 1970s heyday (the studio version of “Sister Andrea” later appeared in “The Lost Trident Sessions”).

“Had McLaughlin relented much earlier, his gesture probably would’ve kept the original line-up together longer. For as good as ‘Country and Eastern Music’ is, that version of the Orchestra would’ve lifted the song to the stratosphere,” said Rodriguez. “One can only imagine McLaughlin’s incendiary guitar blasts driving the song accompanied by Billy Cobham’s relentlessly powerful drum fills and Laird’s underappreciated melodic bass lines anchoring the controlled chaos.

“But in fairness to Hammer and Goodman, the same thing could also be said of Cobham’s early work, particularly his debut album ‘Spectrum,'” continued Rodriguez. “A key difference is that ‘Spectrum’ was better produced and much more fleshed-out than ‘Like Children.’ It also benefited tremendously from the presence of outside musicians like guitarist Tommy Bolin, bassist Ron Carter and even Hammer. Plus, it contains ‘Stratus,’ a tense funk-vamp that has become as much a fusion classic as any of the Orchestra’s music.

“Still, ‘Like Children’ is highly recommended to fans of the original Orchestra as a ‘What if?’ pointing to a possible new direction that fiery line-up could’ve taken had it stayed together. It’ll also be of interest to fans of fusion and Hammer, who pretty much abandoned this kind of unencumbered organic music in favor of working with Jeff Beck in the late 1970s (a partnership that generated its fair share of terrific music along with bombast) before moving on to the electronic synth-stylings of ‘Miami Vice’ in the mid- and late 1980s that haven’t dated very well.” (by wikipedia)