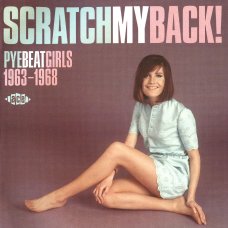 Located in London’s West End, Pye Records boasted a super stable of female talent. Released hot on the heels of our recent Love Hit Me! Decca Beat Girls collection, Scratch My Back! Pye Beat Girls comprises two-dozen peachy selections from Pye and sister label Piccadilly’s 1960s output. The compilation is titled after the opening track by Jan Panter, a Mark Wirtz-produced must-have for those who prefer their girl-pop records beefed up with a dose of fuzz guitar. Tony Hatch, the most successful of Pye’s in-house producers, is represented by cherry-picked titles by the Breakaways, Petula Clark, cult favorite Sandra Barry, the Baker Twins and Julie Grant. ‘Heart’ has to be the rocking-est track Petula ever recorded, so much so that it was covered in the USA by garage band the Remains.

During the swinging sixties, Pye Records and its sister label Piccadilly Records were housed in London’s West End. Both labels had an enviable roster of artists. This included some of the top British female pop singers. Two of the biggest names were Petula Clark and Sandie Shaw. They were enjoying commercial success at home and abroad. However, they were just two of many British female pop singers signed to Pye Records and Piccadilly Records.

Among their other signings were Billie Davis, Sandra Barry, Dana Gillespie, Barbara Ruskin and Sharon Tandy. Then there were groups like The Breakaways, The Satin Bells, The Baker Twins, Jeannie and The Big Guys and Pat Harris and The Blackjacks. All these artists and groups were signed to the Pye Records and Piccadilly labels, and were among the finest purveyors of pop in Britain. They all feature on the Ace Records’ new compilation Scratch My Back! Pye Records Beat Girls 1963-1968.

Opening Scratch My Back! Pye Records Beat Girls 1963-1968 is Jan Panter’s Scratch My Back. It was released on Pye Records in 1966, just as the psychedelic era was dawning in Britain. Although Scratch My Back was written by Len Vandyke, his lyrics incorporates parts of the children’s nursery rhythm Jack and Jill. They’ve been rewritten, are delivered with a mixture of sass and attitude by Jan Panter. Along with harmonies and horns, they player their part in this glorious slice of fuzz guitar driven freakbeat.

Val McKenna’s career began in 1965 when she was just sixteen. By July 1965, the Whitley Bay born singer was signed to the Piccadilly label and about to release Mixed-Up Shook-Up Girl as a single. On the B-Side was one of Val’s compositions Now That You’ve Made Up Your Mind. It’s something of a hidden gem, and shows that Val was a talented singer and songwriter. Sadly, commercial success eluded Val McKenna and she ended up working as a session singer.

In 1965, Petula Clark was still basking in glow of the success of her worldwide hit Downtown. TheTony Hatch penned single had transformed the fortunes of Petula Clark in 1964. She was already a successful singer when Downtown became a hit across the world. However, Downtown took her career to another level. By 1965, Petula Clark had released several other singles.

This included You’d Better Come Home in 1965 which was released on the Pye Records label. It reached just forty-four in the UK charts. Hidden away on the flip side was Heart, which Petula and Georges Aber cowrote with Tony Hatch. He arranged and conducted this heartfelt ballad, which allows Petula’s vocal to shine, as she combines power and emotion. It’s a reminder of why in the sixties, Petula Clark was regarded as one of Britain’s finest female vocalists.

Another of the great British female vocalists of the sixtes was Sandie Shaw. She released the Chris Andrews penned Run as a single on Pye Records in 1966. Run reached just thirty-two on its release in August 1966. This was disappointing considering the quality of the single. It’s like a kitchen sink drama, with Sandie delivering the lyrics as if she’s experienced them. Her vocal is best described as an outpouring of memories and emotions.

While many of the artists on Scratch My Back! Pye Records Beat Girls 1963-1968 enjoyed long and successful recording careers, Nina Rossi’s career was all too brief. Her career began in her hometown of Bournemouth, where she sang in clubs and hotels. Nita was also a regular in the town’s talent shows. With no sign of a record contract, Nita decided to send a demo to Tom Jones’ manager Gordon Mills.

He realised that Nita had talent, and contacted Piccadilly Records. They signed Nita and she went on to release four singles for Piccadilly Records. This includes the Gordon Mills penned Here I Go Again. On the B-Side was another Gordon Mills’ composition Something To Give. When Here I Go Again was released in 1966, the single flopped. Maybe things would’ve been different if Something To Give had been chosen as a single? It comes complete with a big, orchestrated arrangement which accompanies Nita, as she showcases a heartfelt, hopeful and sometimes needy vocal. Together, they play their part in what’s a hidden pop gem that’s since become a collector’s item.

Before embarking upon a musical career, Sandra Barry had been a star of stage and screen. Her stage debut came when she was four, when she appeared alongside Bud Flanagan of Flanagan and Allen. By the time Sandra was ten, she was offered the chance

to head to Hollywood. However, her mother decided that it would be best if she stayed in Britain. Despite this, Sandra went on to appear in film, radio and television. Then in the sixties, Sandra embarked upon a career in music.

Sandra signed to Pye Records, and in 1966, released We Were Lovers (When The Party Began) as a single. This was a cover of Lloyd Price’s oft-covered song. Again, a big, orchestrated arrangement and also harmonies from The Breakaway accompany Sandra’s rueful, hurt-filled vocal. This proves a potent and hook-laden combination, as Sandra Barry gives a familiar song a makeover. Fifty years later, and it’s stood the test of time.

Not many denizens of Essex would christen their daughter after a member of the French royal family. That’s what the Daly’s did, when christened their newly-born daughter Marie-Antoinette. By 1964, Marie-Antoinette was thirteen and had embarked upon a musical career, her name had been shortened to Antoinette. However, Antoinette’s career was short-lived, and lasted just three years and five singles for Piccadilly. Her swan-song was a cover of Tami Lynn’s Why Don’t I Run Away From You? It was released on Piccadilly Records in 1966. Unfortunately, Kiki Dee released a cover of Why Don’t I Run Away From You? the same week. In the battle of the cover versions, Antoinette came second. That’s despite keeping her best single until last.

Dana Gillespie was only sixteen when she signed to Pye Records Records in 1965. Two years later, Dana was preparing to release her third single. The song that had been chosen was a cover of The Hollies’ Pay You Back With Interest. Despite The Hollies setting the bar high, Dana rises to the challenge, and released an irresistibly catchy and melodic cover of Pay You Back With Interest. Since then, Dana Gillespie’s career has blossomed, and she’s released in excess of sixty albums.

The name Dee King might not mean anything to most people. Diane Keen is another thing. She’s been a star of British television since the seventies. However, before that, Dee had a brief musical career.

On her return home from Kenya, Dee got a job with The Ivy League fan club. This resulted in Dee getting the chance to record her one and only single Sally Go Round The Roses. On its release on Piccadilly Records in 1966, the single failed commercially. Those who bought the single, and flipped over to the B-Side It’s So Fine were richly rewarded. It’s So Fine which was written by John Carter and Ken Lewis, is a quite beautiful, tender ballad. It shows another side to the future star of the The Cuckoo Waltz and Rings On Their Fingers.

Before embarking upon a career in music, Glo Macari was a student of the Aida Foster Stage School. By 1965, Gio was signed to Piccadilly Records, and was about to release a cover of Goffin and King’s He Knows I Love Him Too Much. It was arranged by Ivor Raymonde, who was responsible for an arrangement that references Phil Spector’s early sixties sound. Gio’s vocal even sounds as if it belongs on one of the girl groups that Phil Spector produced. Despite the Spector-esque sound, Gio’s cover of He Knows I Love Him Too Much wasn’t a commercial success. However, she went to enjoy a successful career as a songwriter in the seventies, when Gio worked closely with musical impresario Mickey Most.

Julie Grant released fifteen singles for Pye Records. Her tenth single was Up On The Roof, which was released in 1964. By then, Julie was only seventeen. Despite that, Julie was had long been appearing on the stage and screen. Music was a natural progression. Sadly, only two of the singles Julie released charted. This includes Up On The Roof. On the B-Side I Only Care About You which would’ve made a good single. It’s uptempo track with a good hook and a commercial sound. Alas, Up On The Roof was chosen as the single, and only gave Julie a minor hit. It was another case of what might have been.

My final choice from Scratch My Back! Pye Records Beat Girls 1963-1968 is Pat Harris And The Blackjacks’ original version of the Hippy Hippy Shake. It was released on Pye in 1963, but never caught record buyer’s attention. That’s despite having a rawer, more energetic sound than The Swinging Blue Jeans’ cover.

Their cover was released later in 1963, with an almost Beatles-esque arrangement. That’s no surprise. The Swinging Blue Jeans were just one of a number of Merseybeat groups who hoped to follow in the Fab Four’s footsteps. Hippy Hippy Shake went on to give The Swinging Blue Jeans the biggest hit of their career. Very few of the people that bought the single, were even aware of Pat Harris And The Blackjacks’ original version. That’s until the recent release of Scratch My Back! Pye Records Beat Girls 1963-1968 by Ace Records.

Scratch My Back! Pye Records Beat Girls 1963-1968 is a reminder of the quality of music the Pye and Piccadilly Records were releasing during the swinging sixties. Both labels had an enviable roster of artists. This included some of the top British female pop singers. Two of the biggest names were Petula Clark and Sandie Shaw. They were enjoying commercial success at home and abroad. However, there were many more talented female pop singers signed to Pye Records and Piccadilly Records.

Among their other signings were Billie Davis, Sandra Barry, Dana Gillespie, Barbara Ruskin and Sharon Tandy. That’s not forgetting groups like The Breakaways, The Satin Bells, The Baker Twins, Jeannie and The Big Guys and Pat Harris and The Blackjacks. Just like Petula Clark and Sandie Show, they all feature on Scratch My Back! Pye Records Beat Girls 1963-1968.

Sadly, not all these artists and groups enjoyed the commercial success their talent deserved. Sometimes, commercial success was fleeting for artists. Other times, commercial success eluded artists. This lead to careers that’s were all too brief. The songs on Scratch My Back! Pye Records Beat Girls 1963-1968 are mixture of hits, near misses and B-Sides. Each of these songs have one thing in common…quality. Even the B-Sides ooze quality, and rival and surpass the quality of the single. These hidden gems are just among the twenty-four reasons to add Ace Records’ new compilation Scratch My Back! Pye Records Beat Girls 1963-1968 to your collection. (by Derek Anderson) 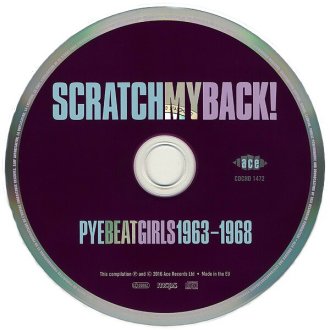