82 year old, forty-year veteran blues club owners from Vicksburg Mississippi don’t get impressed with slicked back hair and suits that went out in the 50’s….just dress nice and remember no shorts on stage. They don’t care who you played with….B.B., Albert, Big Mama, Pee Wee, George Smith, Neckbone, William Clarke, Mickey Champion and all the rest have already been there in person sweating it out just like you. Blues music to them is a living, breathing, drinking and dancing thing that they made their living from….not some petrified, mystified, glorified, rule-laden hallowed treasure to be worshipped on a pedestal. Basically, they know where the music comes from…but they really don’t care about this either. All they want to know is…can you play with soul?

Mama’s Boys come out of Los Angeles/Long Beach and were named after club owner Miss Laura Mae “Mama” Gross. They are led by harmonica player Johnny Mastro who learned to play and sing with Mama watching over. Harps aren’t the favorite instrument in these sax-friendly clubs so you have to know what your doing. But right along with George Smith and William Clarke, Johnny is her favorite. Dave Melton is one of the most soulful guitarists you’ll ever hear and many of LA’s guitarists come out to watch his hands and slide. You can put the rhythm section up against any in the business …no B.S.Mama calls them all her sons and encouraged them to listen, be yourself, and play from the heart.

The Boys have played over 250 gigs a year for the last 9 years, headlined the 28th Annual Grand Prix of Long Beach, have been nominated for “Best Blues Artist” by LA Music Awards, were named “Best Unsigned Blues Band” in Southern California by Doheny Blues Festival, were one of two finalists in LA’s RockWar 2000, voted one of LA’s “Top 100 Unsigned Bands” by Music Connection Magazine, were featured on the national/international syndicated radio program “Blues Deluxe”, recorded 5 CD’s, and can still be found down at Babe’s & Ricky’s Inn. (by cdbaby)

Johnny Mastro & Mama’s Boys’ music, with its alarming, undisciplined presence, is on the cutting edge of modern Blues style. Although the band is awash with shocking juxtapositions that give it a dangerous, reckless look, the music is suprisingly accessible, even in larger venues. See them live is always a deeply moving entertainment experience.

It was over 12 years ago at the oldest Blues club in Los Angeles, Babe’s and Ricky’s, that Johnny Mastro (harp & vocals) found himself in a Blues band called Mama’s Boys. Johnny was encouraged and guided by the band’s namesake, Ms. Laura-Mae “Mama” Gross, proprietor of the club since its earliest beginnings back in 1957. Johnny’s passion for Blues to propelled the band forward, building a local following that kept coming back week after week. Soon the Mama’s Boys band was playing its energy-infused Blues in other Southern California venues as well, often to sell-out crowds.

Looking back at what happened next tells most of this story: Mama’s Boys has consistently played 250+ gigs each year in Southern California for over 10 years running. They might be one of the hardest working young Blues bands in the world. And the world, it seems, is now beginning to discover what many Southern Californians have understood for years: Mama’s Boys Kick Ass.

On The Black Album Mama’s Boys offer Blues that is raw and powerful,without excuses or apologies. They don’t need them. Mama’s Boys is carving its initials in the territory of blues benchmarks set by Hound Dog, Buddy, Muddy, Wolf, Willie, Walter, Junior, and Elmore, among others. It’s electrified Blues like you could have heard in a club on
the South Side of Chicago in about 1949; a musical expression of the kind of raw emotion that is the true grit of life. Fans of Chicago Blues will snap up this new Mama’s Boys CD, then get the two released before it, also excellent, Chicken & Waffles (2002) and Pinch That Snake (2001).

The band has just returned to L.A. after a wildly successful first tour of Europe and they are ready to rip it up in the homeland, from sea to shining sea. On this CD they have proven themselves worthy of the trip. 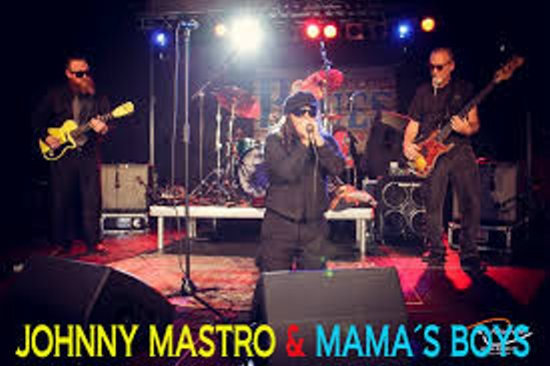 Johnny Mastro’s gutsy, emotive harp is a perfect companion to his distinctive world-class vocals. Couple that with Jimmy Goodall’s greasy lock on the drums and suddenly we begin to understand the Mama’s Boys’ unflinching grasp on excellence. Without need for ego trips, these guys each play well enough to lead their own Blues band. It’s that simple.

The music is recorded with simplicity, too. For this CD they went into the studio, set up some mikes and played live for about four hours. Then they did that again. These songs are taken from those live sessions, raw and natural. Not many bands have the guts to record like that, knowing that even the smallest error gets amplified by the recording process. When music stands as it is, without any overdubs or other studio tricks, you get the truth. On this new CD, or any of the Mama’s Boys’ CDs you can pick up at their performances, you’ll hear just that, the truth: the same great music by the same great musicians you saw on stage.

When Mama’s Boys come to play in your town, I urge you to make it a point to go see them play. You’ll be treated to rock-solid high-energy Blues and a butt-movin’ good time, guaranteed. (by Gary Wagner) 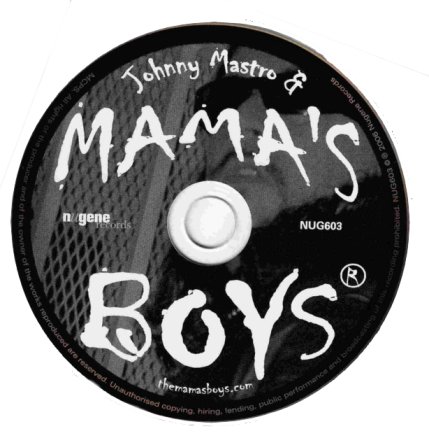 “This marvellous album is as good an example as one would wish to hear of gritty gutbucket R&B in the Chicago style. Impossible to play quietly.” BLUES MATTERS