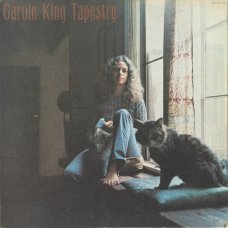 Tapestry is the second studio album by American singer-songwriter Carole King, released in 1971 on Ode Records and produced by Lou Adler. It is one of the best-selling albums of all time, with over 25 million copies sold worldwide. In the United States, it has been certified Diamond by the RIAA with more than 10 million copies sold.[3] It received four Grammy Awards in 1972, including Album of the Year. The lead single from the album — “It’s Too Late”/”I Feel the Earth Move” — spent five weeks at number one on both the Billboard Hot 100 and Easy Listening charts. In 2003, Tapestry was ranked number 36 on Rolling Stone list of the 500 greatest albums of all time

King wrote or co-wrote all of the songs on the album, several of which had already been hits for other artists such as Aretha Franklin’s “(You Make Me Feel Like) A Natural Woman” and The Shirelles’ “Will You Love Me Tomorrow” (in 1960). Three songs were co-written with King’s ex-husband Gerry Goffin. James Taylor, who encouraged King to sing her own songs and who also played on Tapestry, would later have a number one hit with “You’ve Got a Friend”. Two songs were co-written with Toni Stern: “It’s Too Late” and “Where You Lead”.

The album was recorded at Studio B, A&M Recording Studios during January 1971 with the support of Joni Mitchell and James Taylor, plus various experienced session musicians. Several of the musicians worked simultaneously on Taylor’s Mud Slide Slim album. 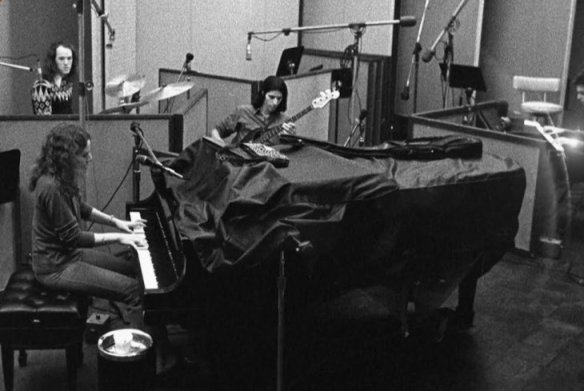 The cover photograph was taken by A&M staff photographer Jim McCrary at King’s Laurel Canyon home. It shows her sitting in a window frame, holding a tapestry she hand-stitched herself, with her cat Telemachus at her feet. 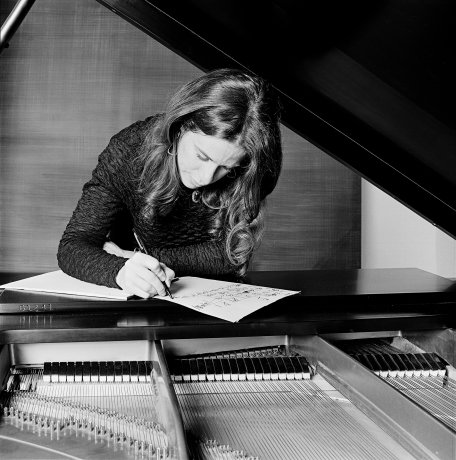 Tapestry was number one on the Billboard 200 for 15 consecutive weeks, and held the record for most weeks at number one by a female solo artist for over 20 years until surpassed by Whitney Houston’s The Bodyguard: Original Soundtrack Album in 1993, which spent 20 weeks at number one. It still holds the record for most consecutive weeks at number one by a female solo artist. The album was listed on the Billboard 200 for 318 weeks between 1971 and 2011 (302 weeks consecutively from April 10,1971 to January 15, 1977), the longest by a female solo artist until Adele’s 21 surpassed it in 2017. In terms of time on the charts, it ranks fifth overall, and in terms of length on the charts for solo musical acts it ranks second. Of all the albums by female artists to be certified Diamond, it was the first released, although it was not the first being certified. In Canada, the album was number one for 9 weeks beginning July 3, 1971

Several songs on Tapestry were recorded by other artists and became hits while the album was still on the charts: James Taylor’s 1971 cover of “You’ve Got a Friend” hit number one in the US and number four in the UK, and Barbra Streisand’s 1971 studio recording of “Where You Lead” reached number 40 while a live recording of a medley in which Streisand paired the song with the Sweet Inspirations hit “Sweet Inspiration” reached number 37 the following year. 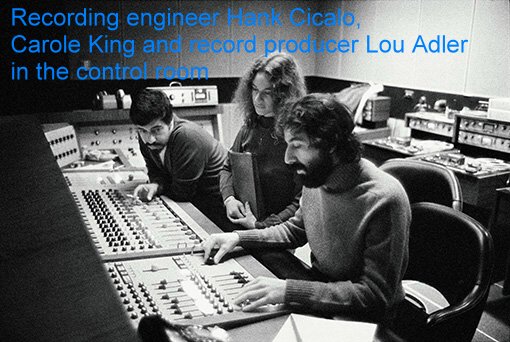 Various artists combined to re-record all the original tracks for more than one tribute album. The first, released in 1995 and entitled Tapestry Revisited: A Tribute to Carole King, was certified gold. The second, in 2003, was entitled A New Tapestry — Carole King Tribute. In 2010 Australian recording artist Marcia Hines recorded a tribute album, Marcia Sings Tapestry.

“Her songs are like stories or sonic movies,” observed Tori Amos. “You want to walk into them. With ‘I Feel the Earth Move’ or ‘It’s Too Late’, you’re right there.”

In 2003, Tapestry was named number 36 on Rolling Stone’s 500 Greatest Albums of All Time, was listed by VH1 as number 39 on their list of 100 Greatest Albums, and was one of 50 recordings chosen to be added to the National Recording Registry. Recordings added to the National Recording Registry are picked to be preserved in the Library of Congress as they are “culturally, historically, or aesthetically important.”

In March 2016 it was announced that Carole King would perform the album live in its entirety for the first time at the British Summer Time Festival in Hyde Park, London on 3 July 2016.. The performance was released the next year as Tapestry: Live at Hyde Park. (by wikipedia) 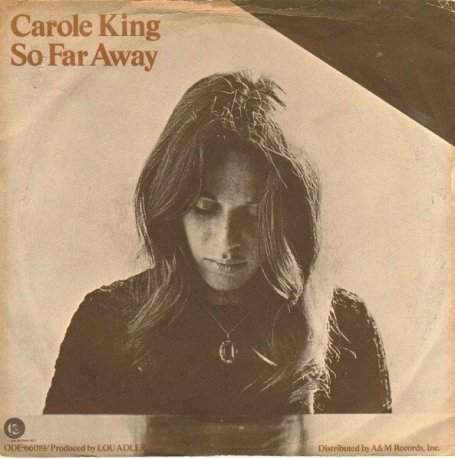 Carole King’s second album, Tapestry, has fulfilled the promise of her first and confirmed the fact that she is one of the most creative figures in all of pop music. It is an album of surpassing personal-intimacy and musical accomplishment and a work infused with a sense of artistic purpose. It is also easy to listen to and easy to enjoy.

Miss King’s past accomplishments have become something of a pop music legend. She and her former husband and lyricist, Gerry Goffin, were one of the three great independent pop song-writing teams of the Sixties, the other two being Burt Bacharach and Hat David, and Barry Mann and Cynthia Weil. It is as much to their credit that they not only wrote one of Aretha Franklin‘s best songs, “Natural Woman,” but Steve Lawrence and Edyie Gorme’s best, “Go Away Little Girl,” as well. They wrote the Animals’ best pop record, “Don’t Bring Me Down,” and Bobby Vee’s best seller, “Take Good Care of My Baby.” Then there was “Chains” and “Don’t Say Nothing Bad About My Baby” for the Cookies, “One Fine Day” for the Chiffons, “The Locomotion” for Little Eva, and “Oh, No, Not My Baby” for Maxine Brown. And, of course, there were some for the groups: They wrote Herman’s Hermits best song, “Something Tells Me I’m Into Something Good,” two for the Righteous Brothers, “For Once In My Life” and the overlooked and under-rated “Hung On You,” and “Goin’ Back” and “Wasn’t Born to Follow” for the Byrds. She even had a hit for herself about ten years ago called “It Might As Well Rain Until September.” On top of them all, there was “Will You Still Love Me Tomorrow” for the Shirelles and “Up On the Roof” for the Drifters. 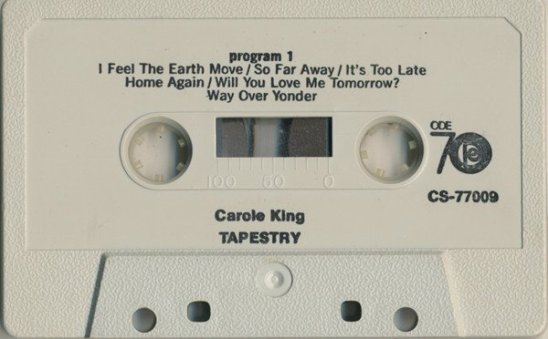 A Gerry Goffin-Carole King song was always engagingly sentimental. It was boy-girl, loneliness-togetherness, “Don’t Bring Me Down” versus “Hung On You.’ ‘My baby’s got me locked up in chains” versus “Will you still love me tomorrow” music the very core of the rock & roll lyric sensibility. The music expressed the outlook with a sweetness that ultimately shine through no matter what the context. The chorus of “Hung On You” is simply a beautiful tune. “Chains” has a blues structure but the melody is pretty, pretty pop music. Even “The Locomotion” has an amazingly distinctive melody line for a dance song. (And Little Eva ten years ago sounds so exactly like Carole King today one can only assume that Carole taught it to her note for note and breath for breath.)

The songs of Goffin and King are superb examples of the song writing craft of the Sixties. Finely honed to meet the demands of the clients who commissioned them, and written with the requirements of AM radio always firmly in mind, they still managed to express themselves in a rich and personal way. Like Hollywood directors who learned how to make the limitations of the system work for them by the use of their own imagination, Goffin and King made the limitations of AM music work for them and in the process created something of their own pop vision. 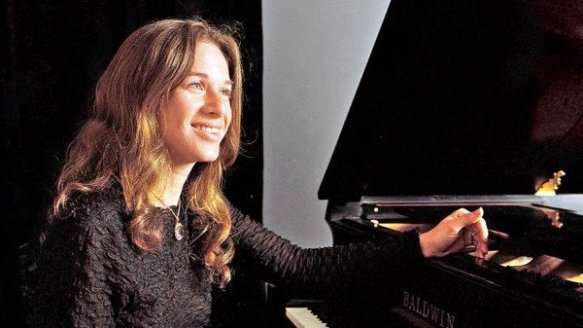 Towards the late Sixties the independent song-writing system broke down as more and more artists preferred to write their own material. Feeling the pressure, Miss King, now separated from Goffin, struck out as a performer, first in the unsuccessful group the City, and now as a solo artist. Not surprisingly, the music she is making today is closely related to the music she created in the Sixties.

The theme of both Writer and Tapestry is the search for lasting friendship, friendship that can be trusted, friendship that can be felt. Those feelings are expressed in a music that is substantially looser and more far ranging than the early melodies. No longer confined to the requirements of writing for someone else and for AM radio the music has grown more intricate, more subtle, and more technically impressive. Similarly, the production on both her albums has been in a soft-sounding, FM-oriented approach, eschewing AM style altogether. These changes have not been altogether positive.

Carole King: Writer was a blessing despite its faults. The rhythm section was made up mainly of her musical friends from Jo Mama and the arrangements sounded like they were pieced together in the studio. The production was poor, managing to sound both labored and sloppy at the same time. Carole herself was mixed too low on many cuts and the band would up with an unusually tinny sound, considering the kind of music they were playing. And yet Carole’s own personal determination and talent transcended these irritants to make the whole thing very worthwhile. (by Jon Landau, Rolling Stone, April 29, 1971) 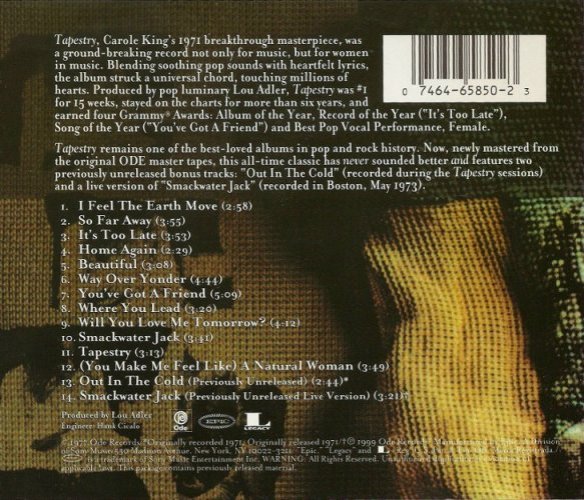 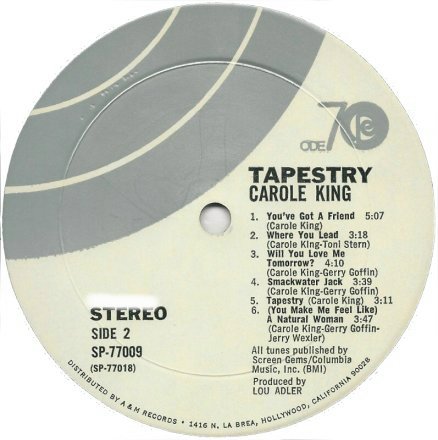 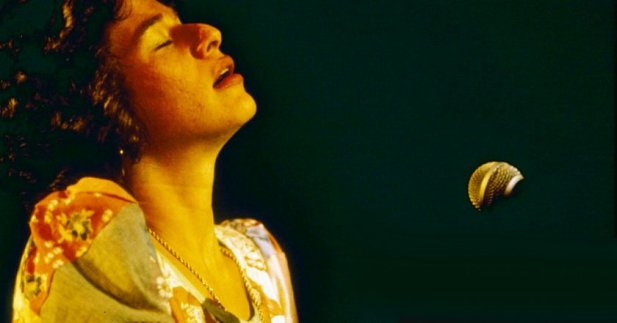