Curtis Ousley (born Curtis Montgomery; February 7, 1934 – August 13, 1971), who performed under the stage name King Curtis, was an American saxophonist known for rhythm and blues, rock and roll, soul, blues, funk and soul jazz. Variously a bandleader, band member, and session musician, he was also a musical director and record producer. Adept at tenor, alto, and soprano saxophone, he played riffs and solos on such hit singles as “Respect” by Aretha Franklin, and “Yakety Yak” by The Coasters (the latter of which later became the inspiration for Boots Randolph’s “Yakety Sax”) and his own “Memphis Soul Stew”

R&B tenor sax great King Curtis recorded for a variety of labels during his career, including stints at Capitol and Atlantic, but what is arguably his finest session came for Bobby Robinson’s Harlem-based label Enjoy Records in 1962. Curtis apparently regarded this as a trial run, since he left Enjoy without signing a contract that same year, in spite of having “Soul Twist” sitting on top of the R&B charts.

Whatever the chemistry was at these sessions (the complete results of which are included here), Robinson managed to convince Curtis not to blow the house down every second of every track, and the ensemble feel that emerged between the saxophonist and organ player Ernie Hayes and guitarists Billy Butler and Joe Richardson is strong, loose, and darn near perfect. Featuring mostly instrumentals, the Enjoy sessions spotlight a studio band (billed as the Noble Knights) that has a little of the same magic that would later make Booker T. & the MG’s so special, a certain soulful exactness, and yet still loose enough to swing. “Soul Twist” is a classic. Curtis’ strong, stuttering tenor sax is a major part of why things work, but these 15 cuts are solidly a group effort, and King Curtis never really bettered the feel he found with these musicians. because King Curtis never sounded better or more relaxed … King Curtis never sounded better or more relaxed. (by Steve Leggett)

Curtis was stabbed on August 13, 1971, during an argument with a pair of drug dealers he discovered on the steps outside his Manhattan apartment. Curtis was attempting to carry an air conditioner into his apartment when Juan Montanez refused to move from the entrance. A fight ensued and Montanez stabbed Curtis. Curtis was transferred to Roosevelt Hospital, where he died. (by wikipedia) 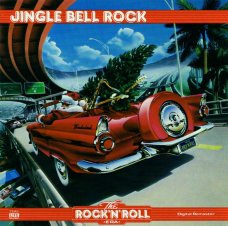 And here´s a nice sampler withRok N Roll and Soul songs about Christmas, publish  by Time Life. And this sampler was a part of the “The Rock N Roll Era”.

in 1987, I guess I was bitten by the same CD buying bug that many were: I bought into the Time-Life “Rock ‘n’ Roll Era” series of CDs. Thankfully I found that the musical selection on these were fine for my purposes, although the sound often suffered a bit. It did enable me to amass a good collection of “oldies” that I otherwise never would have bought. One surprising favorite came my way during the holidays–the compilation Jingle Bell Rock. A couple of the Motown tracks need to be skipped (the Temptations’ “Rudolph The Red-Nosed Reindeer” is narcoleptic at best), but for the most part it is a very enjoyable and crowd-pleasing collection of holiday favorites.

On here are tracks by Jan and Dean (“Frosty the Snowman”, rescued from obscurity), The Ventures (“Sleigh Ride”), Jack Scott (“There’s Trouble Brewin’”), The O’Jays (“Christmas Ain’t Christmas Without The One You Love”) and Dodie Stevens (“Merry, Merry Christmas Baby”). The usual suspects are here also (“JIngle Bell Rock”, “Run, Rudolph Run” and “Rockin’ Around The Christmas Tree”) and Elton John’s “Step into Christmas” finishes out the disc with the most recent song in the collection. (by rudyscorner.com) 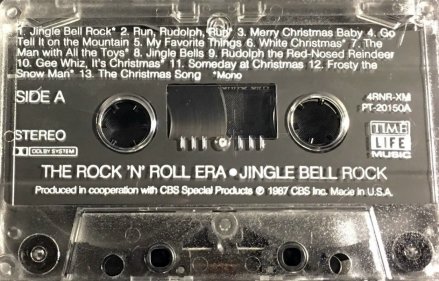 Curtis Ousley (February 7, 1934 – August 13, 1971), who performed under the stage name King Curtis, was an American saxophone virtuoso known for rhythm and blues, rock and roll, soul, blues, funk and soul jazz. Variously a bandleader, band member, and session musician, he was also a musical director and record producer. Adept at tenor, alto, and soprano saxophone, he was best known for his distinctive riffs and solos such as on “Yakety Yak”, which later became the inspiration for Boots Randolph’s “Yakety Sax” and his own “Memphis Soul Stew”.

Curtis Ousley was adopted, with his sister, Josephine Ousley Allen. They were raised together in Fort Worth, Texas. Ousley attended I.M. Terrell High School, and studied and performed music with schoolmate Ornette Coleman.

Ousley started playing saxophone at the age of twelve in the Fort Worth area. He took interest in many musical genres including jazz, rhythm and blues, and popular music. As a student pursuing music, he turned down college scholarships in order to join the Lionel Hampton Band. During his time with Hampton, he was able to write and arrange music and learn guitar. In 1952 Curtis decided to move to New York and became a session musician, recording for such labels as Prestige, Enjoy, Capitol, and Atco. He recorded with Nat Adderley, Wynton Kelly, Buddy Holly, Waylon Jennings and Andy Williams.

Stylistically, Curtis took inspiration from saxophonists Lester Young, Louis Jordan, Illinois Jacquet, Earl Bostic, and Gene Ammons. Known for his syncopated and percussive style, he was both versatile and powerful as a musician. He put together a group during his time as a session musician that included Richard Tee, Cornell Dupree, Jerry Jemmott, and Bernard Purdie.

King Curtis enjoyed playing jazz and rhythm & blues but decided he would make more money as a rhythm & blues musician, stating in a 1971 interview with Charlie Gillet that “I love the authentic rhythm & blues more than anything, and I also like to live well.” From the 1950s until the mid-1960s, he worked as a session player, recording under his own name and with others such as the Coasters, with whom he recorded “Yakety Yak.” Buddy Holly hired him for session work, during which they recorded “Reminiscing.” Holly wrote this song, but gave Curtis the songwriting credit for flying down to the session. His best-known singles from this period are “Soul Twist” and “Soul Serenade.” He provided backing on a number of songs for LaVern Baker, including her 1958 hit single “I Cried a Tear”, where his saxophone became “a second voice”.

In 1965, he moved to Atlantic Records and recorded his most successful singles, “Memphis Soul Stew” and “Ode to Billie Joe” (1967). He worked with The Coasters, led Aretha Franklin’s backing band The Kingpins. The Kingpins opened for The Beatles during their 1965 performance at Shea Stadium. Curtis produced records, often working with Jerry Wexler and recorded for Groove Records during this period, including the Joe South song “Games People Play” with guitarist Duane Allman.

In March 1971 he appeared with Aretha Franklin and The Kingpins at the Fillmore West, which resulted in two live albums: Aretha Live at Fillmore West, and Curtis’ own Live at Fillmore West. In July 1971, Curtis recorded saxophone solos on “It’s So Hard” and “I Don’t Wanna Be a Soldier” from John Lennon’s Imagine. Along with The Rimshots, he recorded the original theme song for the 1971 hit television show, Soul Train, titled “Hot Potatoes.”

Curtis was killed on August 13, 1971 when he was stabbed during an argument with a pair of drug dealers he discovered on the steps outside his Manhattan apartment. Curtis was attempting to carry an air conditioner into his apartment when Juan Montanez refused to move from the entrance. A fight ensued and Montanez stabbed Curtis. Curtis later died at Roosevelt Hospital.  In March of 1972, Montanez was sentenced to seven years for second-degree manslaughter, but was released in late 1977 for good behavior.  On the day of Curtis’ funeral Atlantic Records closed their offices. Jesse Jackson administered the service and as the mourners filed in, Curtis’ band ‘The Kingpins’ played “Soul Serenade”. Among those attending were Ousley’s immediate family, including sister Josephine Ousley Allen, other family members, Aretha Franklin, Cissy Houston, Brook Benton and Duane Allman.[12] Franklin sang the closing spiritual “Never Grow Old” and Stevie Wonder performed “Abraham, Martin and John and now King Curtis”.

In 1970, a year before his death, Curtis won the Best R&B Instrumental Performance Grammy for “Games People Play”.

Curtis was posthumously inducted into the Rock and Roll Hall of Fame on March 6, 2000. (by wikipedia) 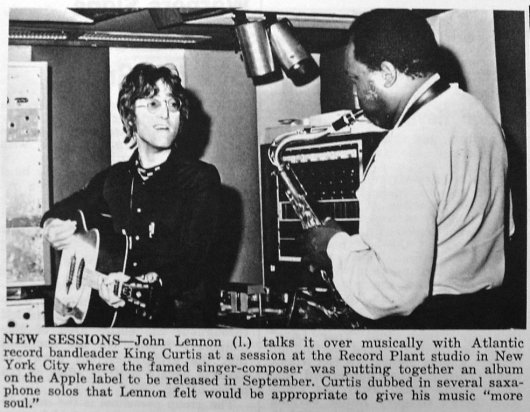 King Curtis brings the sound of Memphis up to the New York studios of Atlantic Records – working here in an all-instrumental mode that serves up his own sax-heavy takes on the big 60s hits of Stax Records!

The album’s maybe a bit telling – given the way that a year later, Atlantic took most what Stax had built themselves – but it also illustrates the strong power the southern scene had on the style of New York soul at the time – as the album’s easily one of the most hard-hitting full length sets from Curtis – done with much deeper vibes overall, and less of the ballads that showed up on some of his previous records. Titles include “The Dog”, “Good To Me”, “Hold On, I’m Coming”, “You Don’t Miss Your Water”, “Last Night”, and “Jump Back”. (by dustygroove.com)

I dedicate this entry to the fantastic soul-scene during the Sixites. 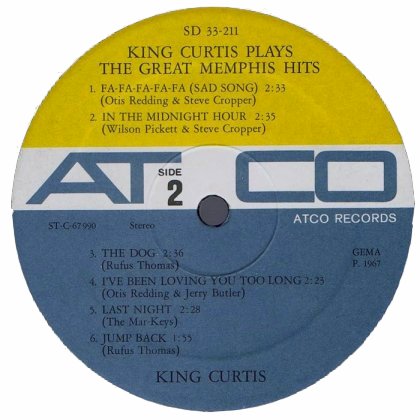 King Curtis with Duane Allman
(what a great pic !)