Nayekhovichi is a klezmer band from Russia formed in 2004. It was named after Vanya Zhuk’s (band leader) grandfather Simon Noakhovich.

The classic release of 2005 comes with a bonus-track! Nostalgic electric guitar, screaming clarinet – the groundbreaking klezmer record that gained praise of the leading masters of this international genre.

I came across Nayekhovichi totally by chance, playing in Krakow’s main square in summer 2006. They were like the ultimate buskers; stunning a growing crowd with their unique take on traditional klezmer music, while the lead singer sang through a loud hailer. I bought the CD there and then, and spent the rest of the trip wondering if it had been the best or worst 10 euros ever spent. As it turns out my judgement was sound; these guys totally rock, whether it’s playing their own music, or their own take on Paint It Black.(by Tom) 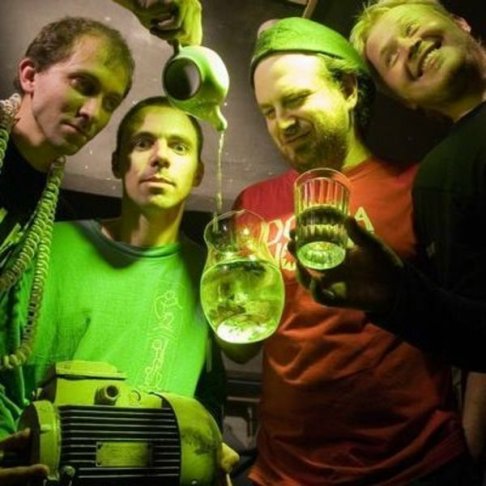 “Taganrog`s a nice song but it didn`t impress me on a record. You sing live better.” (Michael Alpert of Brave Old World)

“What you showed me isn`t bad for a backing track. Now you should make music out of it, maybe add violin… What?! It`s the final product?!” (Josh Dolgin)

“When I was listening for the third time, the sound didn`t annoy so much. You just get used to it” (Jeka Lizin of Dobranotch) 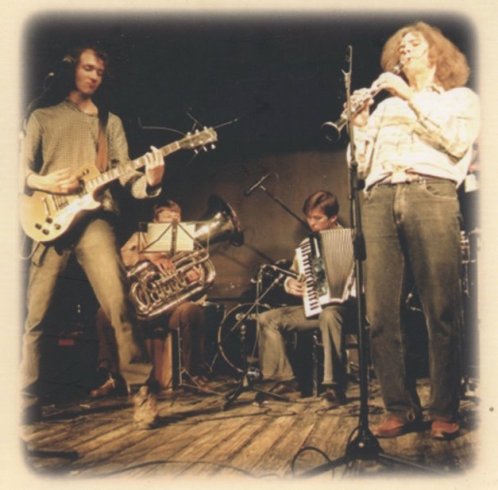 (*) This is of course the classic Jagger/Richards composition !

This another item of the great Mr. Sleeve collection … Thank you very much !

Starting twenty years ago as a group of buskers playing traditional Yiddish party music on the streets, the Amsterdam Klezmer Band has evolved into an internationally celebrated band with a rock solid live reputation. The AKB reenergizes the sound of Klezmer by casually throwing contemporary styles and techniques into the mix. The band keeps traditional music fresh, urgent and very danceable. Audiences all over the world love it, and The Magnificent Seven of Klezmer unleash a dance party wherever they take the stage.

The AKB is both streetwise and classically trained. The seven band members embody the spiritual kindred of the klezmorim: the professional Jewish musicians who travelled across Eastern Europe two centuries ago. However, the band is not dogmatic or limited by traditions and expectations. The AKB embraces the most diverse musical styles and cultures as they go along. Influences from jazz, ska, dance or hip-hop fall effortlessly into place. The result is a distinctive breed of progressive Klezmer music, in which the Amsterdam spirit of freedom and tolerance is always present.

The band plays clubs, concert venues, and festivals all over the world. They have performed in 34 countries, including Brazil, Mexico and South Korea. The AKB was successful long before the Balkan hype became a worldwide phenomenon. It turned out that their unique sound was perfect for the popular Balkan Beats. Many of their songs were being sampled and mixed by dance producers. The Shantel mix Sadagora Hot Dub, for example, became a genuine club hit.

The band’s creative and innovative attitude continues to inspire a new generation of fellow musicians. The band frequently collaborates with guest musicians and producers. To promote 2014 album Blitzmash, the band hit the road with an XL line-up, including drums and electronics, adding even more power and urgency to their music. The Blitzmash extravaganza became an international club and festival hit.

In 2014 the Amsterdam Klezmer Band embarked on a poetic theatrical tour in which the band explored new layers within their music. The performance Benja allowed time for longer pieces with subtle solos and compelling interplay of brass. Benja received rave reviews and drew full houses. And despite the more subdued mood, by the end of the evening the crowd was cheering and dancing once again. The inevitable result of the AKB’s infectious music and passionate energy. (taken from their website)

Mokum is the Yiddish word for ‘city.’ For hundreds of years it has also been
slang and something of a pet name for Amsterdam as the free port and haven for
dissidents from every corner of the globe. Mokum has offered religious, political and
creative refuge to a host of Jews, Huguenots, artists and free thinkers, to which the
likes of Descartes, Vivaldi, John Adams, Chet Baker and Dutch provo activist Roel
van Duijn can attest.

That special blend of longing for freedom and the desire to create a home where one
is truly welcome is at the fundamental root of the Amsterdam Klezmer Band. ‘Mokum’
is also the title of the CD that celebrates the septet’s fifteenth anniversary. What
better reason then to make Mokum a live album since their concerts in over thirty-two
countries have earned them a resounding reputation. It’s release party marks their
1000th gig. They have played at such prestigious festivals as North Sea Jazz (NL),
Sziget (HU), Ollin Kan (MX), Ashkenaz (CA), Jarasum (KR), Moscow Jazz (RU) and
Lowlands (NL) and renowned venues as Paradiso (Amsterdam), Cité de la Musique
(Paris), Batschkapp (Frankfurt), Babylon (Istanbul) and Concertgebouw (Mokum).
And that for a band that began playing in the street.

Each member of Amsterdam Klezmer Band are virtuoso players in their own right,
having studied at both conservatory and school of hard knocks and who have all paid
their dues on the jazz, funk and Latin scenes. This omnivorous attitude allows the
band to bring out the true essence of klezmer, that party and wedding music with a
tinge of melancholy that originated in 19th century Eastern Europe and was played
by itinerant Jewish musicians – ‘the klezmorim’ – who absorbed everything that came
their way into their music. As contemporary heirs to this tradition, this magnificent
seven mix contemporary styles into the steaming melting pot. 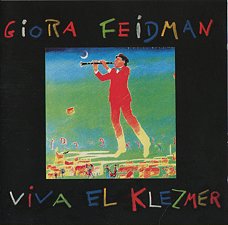 Giora Feidman was born in Buenos Aires, Argentina, where his Bessarabian Jewish parents immigrated to escape persecution. Feidman comes from a family of klezmer musicians. His father, grandfather and great-grandfather made music for weddings, bar mitzvahs, and holiday celebrations in the shtetls of Eastern Europe. Feidman married Ora Bat-Chaim, his personal manager, in 1975.

Feidman began his career in Buenos Aires as a member of the Teatro Colón Symphony Orchestra. Two years later he immigrated to Israel to become the youngest clarinetist ever to play with the Israel Philharmonic Orchestra. He was a member of the orchestra for over 20 years.[2] In the early 1970s he began his solo career. He has performed with the Berliner Symphoniker, the Kronos Quartet, the Polish Chamber Philarmonic, the Munich Chamber Philarmonic Orchestra, and the Munich Radio Orchestra. In 1974 the Israeli Philharmonic Orchestra commissioned composer Misha Segal to write a concerto for clarinet and orchestra for Giora Feidman. The one movement piece, which was based on an original Nigun, premiered that same year. 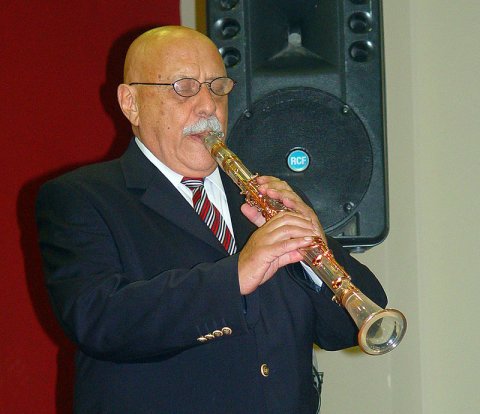 Movie director Steven Spielberg invited him to play the clarinet solos for the soundtrack of Schindler’s List, which won seven Academy Awards.

Feidman founded the “Clarinet and Klezmer in the Galilee” seminar and master class program, which takes place every year in Safed, Israel.(by wikipedia)

And this is another album in the long career of Giora Feidman … listen, discover and enjoy the magic of Klezmer music … a real treasure !

This is the German edition … so, the booklet is written in German. 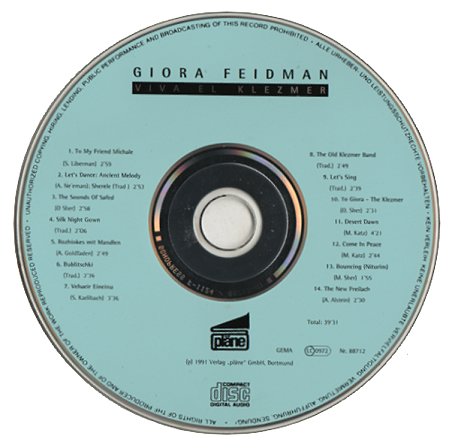 Feidman was born in Buenos Aires, Argentina, where his Bessarabian parents immigrated to escape persecution. Feidman comes from a family of klezmer musicians. His father, grandfather and great-grandfather made music for weddings, bar mitzvahs, and holiday celebrations in the gated ghettos of central Europe.

He began his career in Buenos Aires as a member of the prestigious Teatro Colón Symphony Orchestra. After two years he migrated to Israel to become the youngest clarinetist ever to play with the Israel Philharmonic Orchestra. In the early 1970s he migrated to the USA, settling in New York where he began his solo career.

An accomplished and versatile musician, besides Kletzmer Feidman plays Tango, Jazz, and Classical music and often blends the four currents together into unique pieces. Feidman has collaborated and recorded with many musicians, including Ariel Ramirez, poet/composer Ora Bat Chaim, organist Matthias Eisenberg, and the Moroccan Ali Hafid 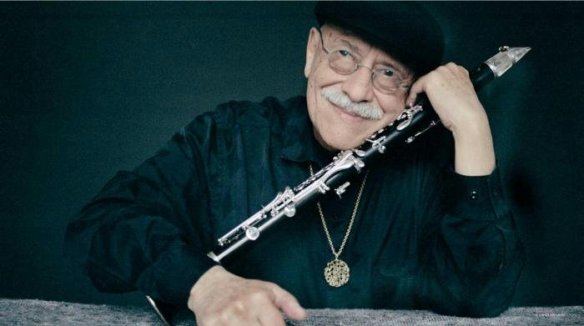 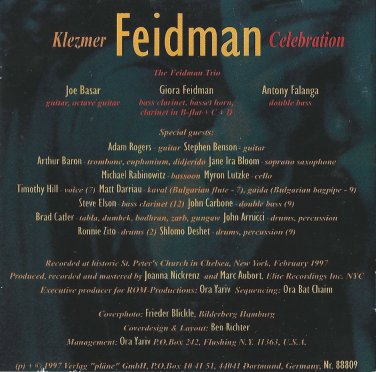 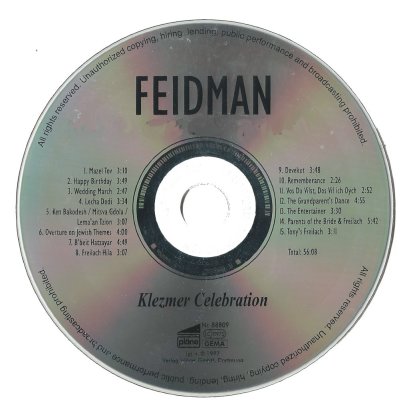