Krupa and Rich is a 1956 studio album by jazz drummers Gene Krupa and Buddy Rich on Norman Granz’ Clef Records label. Krupa and Rich play on two different tracks each and play together only on “Bernie’s Tune”. Krupa and Rich would record again for Verve Records, their album Burnin’ Beat was released in 1962.

On this CD reissue, drummers Gene Krupa and Buddy Rich only actually play together on one of the seven songs, a lengthy rendition of “Bernie’s Tune” that has a six-minute “drum battle.” Krupa and Rich do perform two songs apiece with a remarkable all-star band consisting of trumpeters Dizzy Gillespie and Roy Eldridge, tenors Illinois Jacquet and Flip Phillips, pianist Oscar Peterson, guitarist Herb Ellis, and bassist Ray Brown. Each of the principals get some solo space, giving this release more variety than one might expect. In addition there are two bonus cuts from a Buddy Rich date that feature the drummer with trumpeters Thad Jones and Joe Newman, tenors Ben Webster and Frank Wess, Oscar Peterson, Ray Brown, and rhythm guitarist Freddie Green. Excellent music overall if not quite essential. (by Scott Yanow)

What a great album! Propelled by Rich and Krupa, the band really swings – really nice trumpet and sax solos and of course the highlight of the album, the incredible drum work by two legends. Incredibly good.

Someone complained about the fidelity and it’s true, you can’t expect something recorded back in the 50’s to compare to what is available today but on the other hand this recording isn’t compressed to make everything as loud as possible, and it’s an honest recording (no touch up done by engineers trying to cover up talent defects like today’s recordings). And despite its age, the recording is still pretty good quality – once I started listening to the band I got lost in the music and didn’t even think about the recording quality. Now had there been obvious flaws in that quality it would have bothered me but the tremendous talent of the musicians made me focus on them and just marvel at how good they were. (monkuboy) 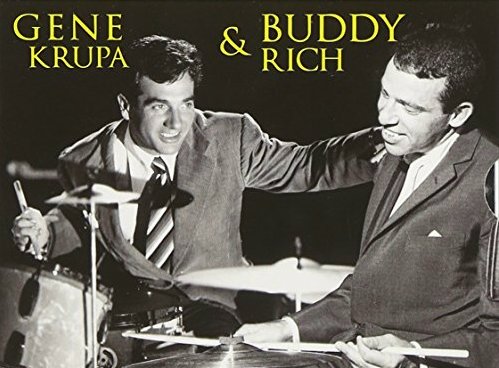 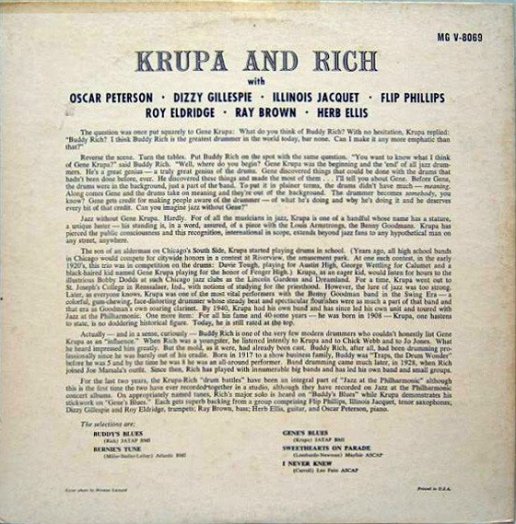 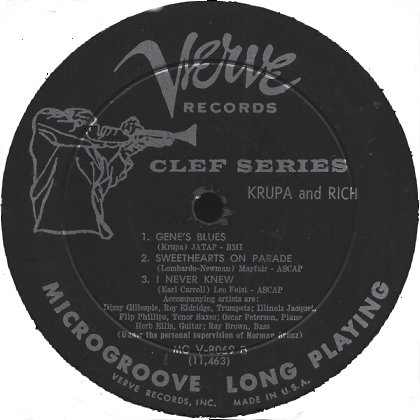