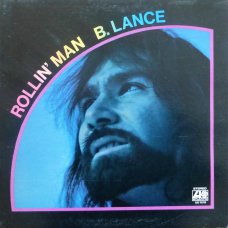 Once, in talking about collecting records with Apothecary Hymns bassist Rob Fellman, he made an astute remark which I’ve always agreed with: “You can’t really go wrong with albums on Atco and Atlantic.” Certainly, all of the classics are worth repeated listens. But Attlantic, under the funky purview of Jerry Wexler and the Ertegun Brothers, had lots of undiscovered diamonds, especially in the rural rock coal mines.

There’s no better example of both the underground cred and above-ground appeal of the Atlantic catalog than B. Lance’s Rolling Man [Atlantic SD7218, 1972]. Bob Lance was a songwriter first, scoring serious soul cred by penning Aretha’s hit “The House That Jack Built” (also on Atlantic). But other than that, and the album’s personnel listed on the back, you’d be hard-pressed to find out anything more, even armed with matrix numbers and Google’s search engine. The only other connection to anything tangible is guitarist Kenny Mimms’ name being mixed in with Duane Allman’s in relation to Muscle Shoals recording sessions. Certainly, one listen to this, Lance’s only full length, proves that the B. Lance wasn’t lacking in white rural R&B pedigree.

And Rollin’ Man definitely has an Allman aftertaste to it, but as an album, I kind of enjoy it more than, say, Idlewild South. It’s raucous but understated, less histrionic, and feels completely authentic. Groovier than the Stones and grittier than the Faces, the Lance band gets right down to business and doesn’t stop til the last note, cooking up a gurgling gumbo of southern harmonies, overdriven guitar leads, white gospel and wailing organ. The simple arrangements belie the attention to detail and depth of sound – check out the rave-up on “Something Unfinished”, or the simmering Saturday night vibe of kinda-title track “John The Rollin’ Man”. The ballads are all tastefully executed and never a drag, although if I had my druthers, the album would end on another rocker rather than the subdued blues of “Tribute To A Woman”.

Drummer Jimmy Evans sounded familiar, but there are so many freakin’ musicians by that name, I can’t tell if he’s the Nashville singer/songwriter, the rockabilly revival king, or someone completely different. Can’t even get much info from a production credit, because Lance,arranged and produced it all himself! But you know what? I’m glad I don’t know anything about this one. It kind of gives it its own little mystery and makes me excited to think about that good ol’ Rollin’ Man rumblin’ back onto my turntable. (Aleph.Mem.Shin)

I add some more informations (as a pdf-file) about Bobby Lance, written by guitar player Kenny Mimb in the year 2009 for a very nice blog called “A List Of Things We Lost”. 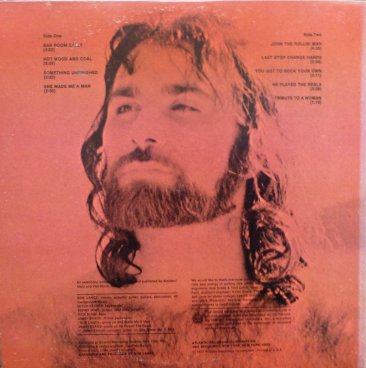