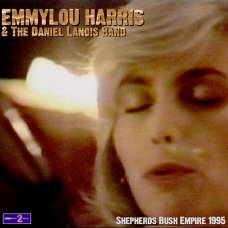 In 1995, Emmylou Harris released one of the most critically acclaimed albums of the decade, Wrecking Ball, produced by Daniel Lanois, best known for his work with U2, Peter Gabriel and Bob Dylan. An experimental album for Harris, the record included Harris’s rendition of the Neil Young–penned title track (Young himself provided guest vocals on two of the album’s songs), Steve Earle’s “Goodbye”, Julie Miller’s “All My Tears”, Jimi Hendrix’s “May This Be Love”, Anna McGarrigle’s “Goin’ Back to Harlan” and Gillian Welch’s “Orphan Girl”. U2’s Larry Mullen, Jr, played drums for the project. The album received virtually no country airplay, but it brought Harris to the attention of alternative rock listeners, many of whom had never listened to her music before. (wikipedia)

And to promote his album Emmylou did together with The Daniel Lanois Band this wonderful show in London.

I am always pleased that I got to read a review of ‘Elite Hotel’ her second solo album, back in 1976 when it was first released.

Not only did I love the album, it helped me discover the country rock genre of that time, and set high standards, that helped me avoid the more ‘cheesy’ country artists. She remains a firm favorite of mine. (beehivecandy.com)