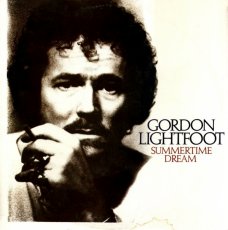 The album marked Lightfoot’s commercial zenith in a remarkable period of popularity which began with the 1970 hit, “If You Could Read My Mind”. He would never again achieve the same level of commercial success.

With Summertime Dream, Gordon Lightfoot produced one of his finest albums, and wrapped up a six-year period of popularity that he would not recapture. Propelled by his second biggest hit, “The Wreck of the Edmund Fitzgerald,” Summertime Dream summed up the sound that had served Lightfoot so well in his post-“If You Could Read My Mind” days. This distinctive sound featured Lightfoot’s strummed six- or 12-string guitar complemented by Terry Clements’ electric guitar lines and Pee Wee Charles’ pedal steel guitar accents. The material here is excellent, and the singer’s voice is at its strongest. Mixing upbeat songs like “Race Among the Ruins,” “I’d Do It Again,” and the title track with beautiful ballads such as “I’m Not Supposed to Care” and “Spanish Moss,” Lightfoot and his band deliver a tasty smorgasbord of intelligent, grown-up music. As for “Edmund Fitzgerald,” its continued popularity more than 20 years after its release attests to the power of a well-told tale and a tasty guitar lick. (by Jim Newsome)

In other words: What a great singer/songwriter !

All songs written by Gordon Lightfoot