LOS CANARIOS from Spain started off as a typical, run of the mill pop/rock band (probably not unlike Los Bravos, but I’m not sure) and released three albums from 1968 to 1972. I’m sure fans of the pop CANARIOS were in for a total rude awakening when they released this double album, “Ciclos”. The band totally went off the prog deep-end and went and adapted Antonio Vivaldi’s “The Four Seasons” in a prog rock setting. The main guy of this band, Teddy Bautista included lots of great analog keyboards like the Moog II-P modular, Mini Moog, VCS-3, ARP 2600, Mellotron M400. Other members included Alain Richard on drums (and tons of percussion), guitarist Antonio Garcia de Diego, Mathias Sanvellian on additional keyboards (piano, organ, RMI electric piano, harpsichord, etc.), and bassist Christian Mellies. Add that with a choir (both male a female), a couple of male vocalists (I bet the not-so-great singer was one of the band members), and a female soprano, provided by an Indonesian named Rudmini Sukmawati (in which photos of her make her look Gothic, one scary picture of her makes her look like Marylin MANSON!).

This is a totally complex and densely layered album which you’re not likely to get on the first listen. Lots of really amazing analog synths. In between classical themes are rather bizarre and twisted use of synthesizers. One part finds the band being really silly by having a barbershop quartet sing “Plastic Christmas” with lyrics that go: “It’s another plastic Christmas / Santa Claus has died / One more thing to celebrate”, suggesting they felt Christmas had became a big load of crap (they should try Christmas here in America some 30 years later, which got so bad I tend to leave the radio and television off that time of year because of the hype and overcommercialization, not to mention worn-out Christmas carols).

My only real complaint goes to “Himno a la Armonia Implacable del Fin” (on the fourth and final movement entitled “Cuarto Acto: El Eslabon Recobrado”), I think that piece downright sucks with the overly dramatic and cheesy male operatic vocals and choir. I can live without that, but the rest of the album demonstates why not only is this regarded as one of the best prog albums to come out of Spain, but one of the best prog adaptations of classical aside from Il ROVESCIO DELLA MEDAGLIA’s “Contaminazione”. My other complaint is CANARIOS never followed up “Ciclos” with perhaps another full-blown prog album, perhaps this time, original band compositions. This was unfortunately their only prog album. Aside from “Himno a la Armonia Implacable del Fin”, I truly think this is one of the all-time great prog take on classical music. Totally essential album. (by Proghead)

This could be one of the Top 10 best ProgRock albums I ever heard. Besides the (probably) 30 different instruments [including a Theremin — :-)], the lyrics, the vocals, actually add to the complexity of the album. Incredible dynamic and mood range, from lyrical to abrasive, from stunning Spanish guitar (acoustic, 6 and 12 strings) solos to raucous, outright in-your-face synths and percussions, this album is absolutely breath-taking. The fact that I really love Vivaldi, is incidental, in this case. I still have goose-pimples. The accompanying booklet (in Spanish) is also a creation of love and a pleasure to read. This, friends, ought to be what ProgRock is all about. This is a masterpiece. (by rozsa)

The story of this little known progressive rock gem is almost as interesting as the music itself: a true, sprawling four sides of pure symphonic grandeur of the scope and ambition of “Tales from Topographic Oceans” or “The Lamb Lies Down on Broadway.” The Spanish band started out as the pop/rock group Los Canarios and had several releases which did well, but were of little interest to prog fans. Then around 1973, leader Teddy Bautista split with his bandmates and retained the name, shortening it to just Canarios. He surrounded himself with all new people and decided to create an epic work for the ages. Today, “Ciclos” is little known and rarely discussed, but I think this is likely the most significant Spanish progressive rock title of its time. As Hugues points out, even the fact that such a project could come to fruition given the political/social oppression of Spain in this period makes it very existence incredible. The high-minded plot themes deal with the circle of life and the history of humanity.

“Ciclos” contains only four songs, each covering an entire side of this double album. The music is a free reinterpretation of Vivaldi’s “The Four Seasons” and a serious attempt to meld together classical music with symphonic progressive rock. I say reinterpretation because this is not purely a rock band covering a piece of classical music. Everything is subject is change here and the four pieces show a wealth of creative writing and arrangements. The band brings in all various styles to play with: symphonic prog, jazz rock, avant-garde, operatics, and melodic pop/rock. The end result ends up being something not far from the Italian prog of the same period: ambitious, bold, a bit naïve, and sometimes a bit over the top. The “everything but the kitchen sink” approach is on display here. It’s a complex album and in my view a great success, but it takes time to reveal itself to the listener. Like some other reviews I’ve read, the album did not appeal to me at first. Had I written a quick review it would not have been complimentary. But the more you play this one, the better it gets, which is why I rarely write quick reviews. Sections of the album are beautiful beyond belief, other sections rock hard, and other sections leave you scratching you head at what you just heard. Not bad at all!

“this album is much more than just a cheesy rock adaptation. The band put a lot of effort to mix elements from jazz, blues, opera, and even the modern avant-garde classical into Vivaldi’s original. Listeners are treated to harpsichords competing with blues and jazz-infected electric guitars, moog synths that let loose a flurry of notes from Vivaldi’s original composition before jumping into funky seventies fusion, classical guitars that gently play melodic interludes as the drummer bangs away inspired by John Cage’s compositions for percussion. These guys simply loved to mix different genres of music together.” -Steve Hegede

As some have pointed out, it can be a bit garish and cringeworthy at times-this is a fair criticism. The keyboard sound choices in particular can be a little cheesy and may make the album too dated for some. In a pure sound sense it does not hold up quite as well as the Yes and Genesis titles mentioned above. But, for those who don’t insist on refined restraint in their prog adventure, “Ciclos” is a pure roller-coaster ride that may leave you breathless with listening pleasure. It is certainly not the least bit ashamed to wear its heart on its sleeve. Tightly performed and with reasonably deep, punchy sound, the album lays out a convincing and jamming rock base over which it displays incredible window dressings: I most love the oodles of unique instruments, the little baroque elements, the occasional operatic vocals and choirs, and the adventurous avant-garde excursions. The album can seem inspired by Topographic Oceans although Yes were more seasoned, and Oceans final product more “musically mature” than this one. My personal guess is that most people who like classic era Yes, Genesis, or Banco will be very happy to have acquired Canarios. I consider this title nearly essential to a deep prog-rock collection. (by Finforrest) 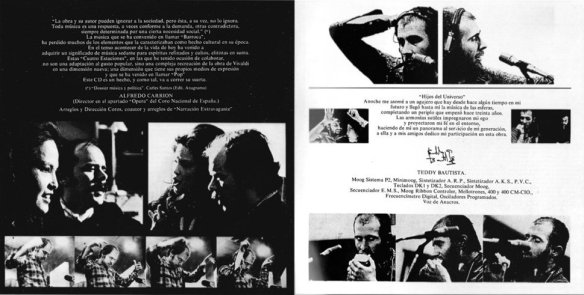 One of the best albums of the prog rock genre. Ciclos is an adaptation of Vivaldi’s “Four Seasons.” They don’t make a note-by-note interpretation, but they add some typical prog rock elements, such as the use of Mellotrons and Moog synthesizers, played with virtuosity. This recording is a more accurate interpretation of a classical piece than “Pictures at an Exhibition” by Emerson Lake & Palmer. There’s a lot of color in this recording, with vocals in English, Spanish, and Latin, plus the presence of opera singers, electric guitars, and electronic keyboards. This one has been long out of print, but it’s worth it for fans of progressive rock. It’s an underground classic of the genre. (by Juan Sjöbohm) by Juan Sjöbohm 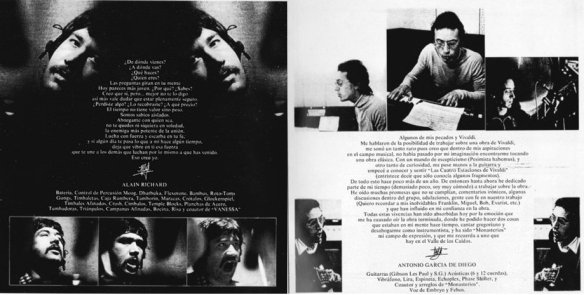 Arranged and conducted by Alfredo Carrión and Teddy Bautista