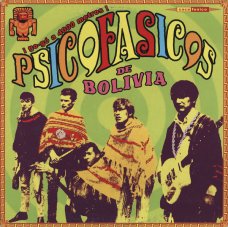 Bolivian youngsters knew how to do it, yes. If you’re searching for REAL garage and ’60s punk sound and attittude, this is for you.

Also, if you’re simply loving the typical South-American ’60s sounds, you’ll be pleased with this collection of rare, RARE tracks taken from impossible to find 45s from one of the hardest to follow ’60s scenes.

Loads of fuzz, organ and raw sounds here, all been professionally remastered again (some of these 45s are sooo bad sounding, we’ve done our best!). This CD release includes an 12-page full colour booklet with liner notes and photos. (Press release)

There has been much written elsewhere about the absolute coolness factor of this rare el go-gó & sicodelico from late 60s Bolivia. I’ll try to just give a bit of info about the various outstanding groups found here.

First an intro commercial for Inca Kola, then… 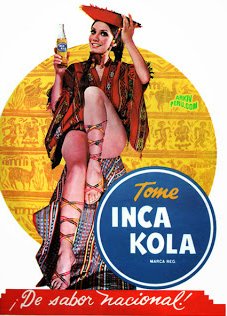 Fourteen songs from 1966-1969, mucho fuzz, primitive but great productions. Most tracks are covers: the Dhag Dhag’s take on “One Track Mind” by The Knickerbockers; Grupo 606’s takes on “Break On Through” by The Doors & “Gotta Get Away” by The Blues Magoos; Los Ecos do Rufus Thomas’ “Walk That Walk”; The Loving Darks cover The Rolling Stones’ “Complicated”; Los Burros fuzz out The Rascals’ “You Better Run”; while Los Bonny Boy’s Hot’s (???) cover Peruvian Andino hit of Jorge Bravo de la Rueda/Yma Sumac. The original songs are also impressive, like the punker “Pena” by The Blackstones or the somber “Tipo sicodélico” & the swinging “Bohemio” both by the Dhag Dhag’s.

It’s a wonder how records of any kind were made at all in a country where even in the big cities the power was regularly shut off at 11:00 pm every night & where farm carts still outnumbered cars on the roads. Groups like Grupo 606 had to make their own instruments before they could get to play anything. The Bolivian police in La Paz & other cities like Cochabamba were always on the look-out for local long-hairs & youthful rebels. They launched a campaign called ‘Operacion Tijeras’ (Operation Scissors). It consisted in shaving the head of any long haired rocker/rebel in these cities. Afterall, they might be revolutionaries.

Los Daltons – They came out of Santa Cruz de le Sierra around 1967. In 1968 they released a four-song instrumental EP. Due to the 11:00 pm electricity cut-off, they did without a singer who would need a microphone. These instrumentals, led by a crazed merry organ, didn’t need vocals. This album starts with their version of the Ventures “ High & Dry” only here they were referring to the high & dry plains of the Bolivian Altiplano.

The Dhag Dhags – Behind this untranslatable name hides a undeniable gem: one of the best 60s beat bands in the world. The Dhad Dhasgs were a trio of teenagers from La Paz led by the brilliant Javier Sandoval. In 1968 he released his first EP on the “Psicofásicos” division of the Discos Mendez label. “Trata de Comprender” (Try to Understand) is their version of “One Track Mind” by The Knickerbockers. “Type Sicodélico” is an original composition, written in English, probably the first recording of psychedelic music in Bolivia. Its spectral atmosphere is reminiscent of the Peruvian group Los Saicos. On “Bohemio” Sandoval mocks the local conservatives by creating a ‘groove’ that caused every El Go-Gó girl from La Paz to Santa Cruz to go crazy.

Los Ecos – The crazy drum beats & shrill cries you hear coming out of this band come from Terso, the 11 year old girl on drums in this band. She & her three companions, revel in the infernal hully gully beat. They began performing in mid-1967. On this disc they do their version of “Walk That Walk” by Rufus Thomas. In 1968, the band had achieved national success with their magnificent song “Callaré Simplemente”.

The Blackstones – Here we have another trio originally from Santa Cruz, they moved to Cochabamba & recorded an EP on Psicofásicos in 1969. Here they do their version of “Pain” by the Walkers sung by JC Lugones “Pena” is a typical case of teenage frustrations brutally played in the best three-chord tradition on screaming electric guitar. Minimalist, crude, neurotic punk from Bolivia before there was punk.

Los Tennyson – There is not much information about these poets. They are kind of a mystery band. They are probably from Cochabamba or Oruro. They had a single in 1967, a version of The Twist. The song here was taken from their EP Psicodélico recorded on the Lyra label in 1969.

Grupo 606 – In late 1966, three friends from school in Cochabamba formed this great band. At first they just played at local parties with instruments made by themselves. At one of their shows in 1967 they met Oswaldo, a radio announcer & singer. He joined the group & got them a recording contract with Lyra. At the beginning of 1969, these chavalitos (only 17-19 years old) released their second EP, demonstrating their best & angeriest garage style. They play their version of “Break on Through” by The Doors on the first side & open the B side with a sublime version of “Gotta Get Away” by The Blues Magoos.

Los Burros – Started in 1967, Los Burros was one of the most successful bands from Bolivia. Originally from Santa Cruz de la Sierra, this band was formed with members of Los Vandalos & Fire Hearts. Once they got a little notoriety, the moved to La Paz where the soon frightened the conservatives. They rode around in their Prado jeep painted Rolls-Royce yellow, wearing baggy pants & floral shirts. They sang in Spanish, Portuguese, & Italian. They recorded “El Pobre”, their version of the Spanish band Los Pasos’ tune, in September 1968. That same year they were arrested by the army as suspected guerillas supporting Ernesto ‘Che’ Guevara because they had beards & long hair. By the way, Los Burros are the guys on the cover. Their second song is their version of “You’d Better Run” by The Young Rascals.

Los Bonny Boy’s Hots – They were the first well-known electronic band in Bolivia. They worked on a lot of records accompanying singers for Lyra, but their most interesting releases were their reworked & roomy recordings of various artists. On this album they do a version of the famous song composed by Jorge Bravo de la Rueda that was popularized by Yma Sumac, done to go-gó tempo. The song is about the mythical Incan Sun virgins of the sixteenth century. Recorded in 1966, this instrumental was a success in Bolivia. It ushered in a spate of traditional Incan songs set to the go-gó pace.

The Loving Dark – Here they are named The Loving Dark, but on their first EP they are called Amantes Oscuros (Dark Lovers). The group was formed in La Paz by Argentinean guitarist-singer Felix Chavez & Bolivian drummer Boris Rodriguez in the year 1969. Chavez was originally in the band Las Tortugas .Rodriguez in Los Black Byrds, one of the pioneers of rock groups in Bolivia. They recorded three EP’s for Lyra by 1972. This version of “Complicated” by the Rolling Stones comes from their second EP from late 1969. Their play sound has been described as ‘BIG’: great guitar fuzz, demonic drums, groovy organ & bass at least 10 years ahead of their time.

Los Grillos – Los Grillos are probably the most famous group of this compilation. Los Grillos began in 1967 under the name anglicized name The Crickets in Cochabamba. Shortly after forming, they changed their name to the Spanish Los Grillos. They played the current popular dance music & they achieved great successes. They regularly appeared on Bolivian & other South American television. They recorded at least 20 EP’s for Lyra & later their own label Grillo. In the 70s, they played their own unique style of folk-rock with Andean sounds & Moog synthesizers. The song here dates from 1968. It is one of their early recordings. It is a famous Spanish popular song with lyrics by Federico Garcia Lorca. However, the guitar solo make it worthy of inclusion here. (nathannothinsez.blogspot.com)

I got this rare item from Mr. Sleeve … thank you very much !