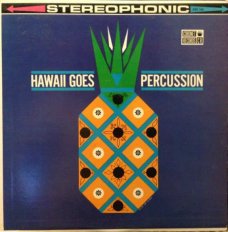 Hawaiian Moonbeams is the only full-length artifact of the eponymous band, released in 1957 on the Coronet label… and shrouded in mystery. Even as an Exotica fan, I prefer mystique in my music rather than cobwebbed history, but in the case of this album, the revelations and peculiarities are particularly noteworthy. Who are the Hawaiian Moonbeams? I wish I could tell. The liner notes do not reveal anything but prosaic hogwash about Hawaii. It is safe to assure that two gentlemen are behind this project, or to be more precise: two steel guitarists, with at least one of them being a known expert in his field, but more about this later. The album comprises ten songs, surprisingly enough all of them unique material, with a few purposeful chords of Hawaiian classics thrown in for the aficionado.

There are two instances where a ukulele player joins the duo, but apart from his appearance, there is anything but shedloads of steel guitars. One thing, however, is certain: despite this minimal instrumental base, the tonal range of the steel guitars lures and is able to deliver more plasticity and colorful hues than many other Hawaiian albums. The novelty factor of two steel guitarists is not overly huge, this is still a proper Hapa Haole album, albeit one where the reduction helps carving out the richness of the textures, surfaces and halftones.

Now that this is settled, let me briefly unveil one of the most audacious naming convention-related incidents in Exotica history, for this album is also re-issued in the late 50’s and early 60’s as Hawaii Goes Percussion. The reason is completely beyond me, for there is not one single percussion device on board. Not. Even. One. On the plus side, the two stringed devices sound delicately crunchy and gossamery distorted, and this has nothing to do with a less than optimal studio or a wonky vinyl version rather than the recording technique. Everything sounds immediate, upfront and punchy. The greatest of all mysteries, though, is the final track called Luau Lei. The people at Coronet are so cheeky! Find out below why this is the case. But first a few words about the nine unique traks that precede it.

Scents of gentle Rock, Bluegrass notions, a pinch of wide prairies and larger doses of Polynesia: Hawaiian Blues is an uplifting, only very distantly melancholic ditty with lots of steel guitar layers and golden rhythm ukuleles. The fact that there are are two steel guitar players pays off in a richer density. The second guitarist plays rhythmic counterpoints in adjacency to the ukulele, and instead of creating an all too monotonous soundscape, the interplay between the experts becomes more interesting. The gleaming Serenade decelerates the tempo and launches with elasticized technicolor strings. The mood is inebriated as expected, but it is once more the interdependency and simultaneity of the two steel guitar strata which fathom each other’s sphere. Benign warmth and designed coolness are in a constant intertwinement, the tone sequences comparably modern instead of chintzy.

Up next is Lovely Guitars which enchants with its short prelude whose afterglow is anything but wondrously dazzling and vigorous, showcasing the textural beauty of the steel guitar. The actual song is all about steel guitars. Their walls of sound are so huge that this tune seems to be played by a trio! The arrangement lives up to the title, this is indeed rather lovely and has warmth all over it. The cheekily titled Hawaiian Bounce then ventures into a few chords of Jack Owens’ Hukilau Song, and this is surely no accident, but a nod to those listeners who are right at home in the more popular docks of the Hapa Haole harbor. In other news, the tune is a swinging one, a curious remark due to the omission of horns. Side A closes with Swinging Palm Trees, another example of a more Rock-oriented structure with city-strolling and spiraling motifs. These are not perfectly memorable or catchy, but the rhythm guitar offers a streamlined counterpoint and coats the whirling melodic splinters. Best of all: the roles are not set in stone, and the rhythm guitarist is at one point responsible for the lead. Quite eclectic.

The hammock-friendly Sunset opens side B with gleaming red-tinted melodies and a great coalescence of the two principal guitarists. The actual mood is not necessarily of the dusky kind, for the chords and various sustain phases are appropriately lively and effervescent. Devoid of romantic notions or a syrupy transfiguration, Sunset is more rooted in brighter daytimes. And so is Guitar Chant which goes back thematically to the opener and increases the tempo to create a glitzy guitarscape. The signature element are the short but eminently auroral pizzicato strings. Like swift jags or blebs they are unique enough to tower above the album’s cohesive riverbed. While Hawaiian Night is the first – and only – tune to invoke a nocturnal atmosphere not via its colorful guitars but thanks to the fissured, laid-back groove which allows the admixed short riffs of Ralph Rainger’s and Leo Robin‘s Blue Hawaii to conflate all the better with the dark background, South Sea Island is a comparatively long shanty of almost three and a half minutes, able to encapsulate yearning, carefreeness and a sense of drifting in its polymorphous setting. The tempo is constant, but the sub-themes and undertones oscillate and recur constantly.

Another alternate front + back cover:

The final Luau Lei is the outro, but not just any outro. It leaves a stale aftertaste and wakes the detective in the Hapa Haole connoisseur. I am no luminary in this field, not in the slightest, but even I notice that this tune seems to be taken out of its original context. The sound quality and instrumental pool changes decidedly. A rhythm acoustic guitar in tandem with a ukulele as well as bass guitar vesicles form the fundament for the sun-soaked steel guitars to shine. The solution to this riddle: this tune is taken off another album released on Coronet, Harry Kaapuni & His Royal Polynesians’ Aloha Hawaii (1960)! I spot minor differences in the backing chords, so this is a slightly different recording that was probably turned down, but shelved anyway. The only problem with my stray theory: Aloha Hawaii is released in 1960, but Hawaiian Moonbeams precedes it by roughly three years. Exotica, the genre full of mysteries…

Two steel guitarists, the occasional appearance of a ukulele player, the inclusion of Harry Kaapuni in order to help out with the needed tenth track as well as the highly curious alternative title Hawaii Goes Percussion make Hawaiian Moonbeams an extremely curious, if also ephemeral artifact even by Exotica standards. The prosaic liner notes are particularly wasteful and unnecessary, for the extrinsic peculiarity which twirls around the album causes a peak in any detective’s interest to unravel a secret which is most definitely utterly mundane. To be honest: Hawaiian Moonbeams is too bland and unimportant an album in-between the bigger works of the genre to gain a cult following which tries to decrypt the mystique.

To pose just one comparably pressing question: could it be that Harry Kaapuni is the guitarist on all of these works? This cannot be entirely ruled out. The wish to know just that is deeply engraved in mankind’s reception and the saying “honor where honor is due.” Be that as it may, music-wise, Hawaiian Moonbeams offers a good twist in terms of the Hapa Haole formula. Instead of ukuleles or soft percussion, two guitarists are in constant dialog. The ensuing arrangements are still varied and colorful, thanks to the tonal range and attack of the steel guitar. Dreamscapes, Rock infusions and beach panoramas meet, mesh and depart. There is no real corker on board that blows anyone away, but the immediacy and punch of the recording are worth noting. And who knows, maybe the album is indeed some sort of classic: at the time of writing, it is digitally available on Amazon MP3 and iTunes under the spiteful title Hawaii Goes Percussion, whereas Harry Kaapuni’s albums on Coronet are not. Is this telling, or yet another riddle? (ambientexotica.com)