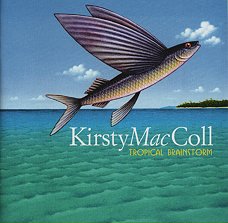 Tropical Brainstorm is the fifth and final studio album by Kirsty MacColl, released in 2000. It was inspired by her trips to Cuba, and many tracks include Spanish or Portuguese lyrics. “Good for Me”, a non-album track co-written with James Knight, was her last song.

Despite the apparent success of the album (certified Silver in the UK), the V2 label dropped MacColl before her death in 2000.

The album was released with three extra tracks in the US. (by wikipedia)

Ewan’s pride was always a folkie in her bones, a singer whose acute arrangements were dulled by prefunk grooves. That’s why the sauciest songs on her Galore best-of sound a little fusty, and also why this Latin-inspired and -flavored return to the studio seemed like nothing to get worked up about. (Remember Rei Momo? By David Byrne? Right.) Making no claims for the clave of her same old Brit backing guys, she soars like she never has anyway. She always had attitude, but whether she’s stalking a fan gone “to a record store/To buy a CD by some other girl not me” or walking all over some Limey masochist in her most impractical shoes, these songs are so loose and raunchy they live the carnival cliche of life-giving rhythm “Mambo de la Luna” stakes its video on. The saxophone-and-autoharp finale is a return to foggy London town even though most of the album takes place there, the non-Latin bonus tracks are letdowns, and MacColl’s death in the Caribbean last December hurts every time she ai-yi-yis about what a slut she turned out to be. (by Robert Christgau)

This is a very difficult album to critique in a dispassionate way. A singer/songwriter with a nearly perfect bloodline (her father was Ewan MacColl and Peggy Seeger was her step-mother), Kirsty MacColl had been writing brilliant songs and releasing modestly successful albums since the early ’80s. The last time listeners heard from her, on 1993’s grim Titanic Days, she had just gone through a painful divorce; she swore that she wouldn’t record another album until she could make a happy one. Almost eight years later, she did just that. Tropical Brainstorm is, in part, a celebration of the musical traditions of Cuba, Brazil, and Mexico; mambo and samba rhythms are everywhere, and Latin percussion bumps up against violins, trombones, and nylon-string guitars on almost every track. But the songs’ lyrical themes range more broadly — while “Mambo de la Luna” is all about the flavor of life in Cuba, “England 2, Colombia 0” is a hilarious tale of romantic treachery and “Us Amazonians” a wry depiction of a matriarchal tropical utopia.

But even when her lyrics cut to the bone, there’s an underlying sense of happiness and good humor that was entirely missing from her last album. And there’s the rub. What makes this album so difficult to approach with much critical distance is the fact that MacColl was killed in a boating accident several months after it was completed; she died in the ocean off the coast of Mexico, one of the places that inspired the exuberant and sweet-natured music on this wonderful record. How to listen to this music in the wake of that fact? With grateful joy, one supposes. And with a gentler gratitude that she was this happy at the end of her life — if Titanic Days had been her last effort, it would have been difficult listening indeed. (by Rick Anderson)

This is the perfect album for a hot summer night … believe me ! 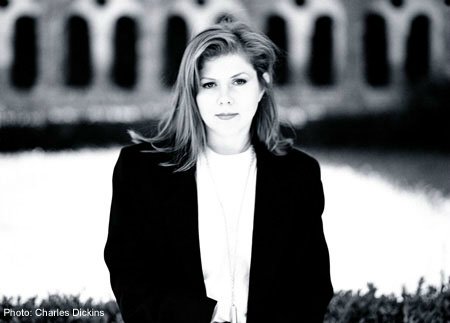 In 2000, following her participation in the presentation of a radio programme for the BBC in Cuba, MacColl took a holiday in Cozumel, Mexico, with her sons and her partner, musician James Knight. On 18 December 2000 she and her sons went diving at the Chankanaab reef, part of the National Marine Park of Cozumel, in a designated diving area that watercraft were restricted from entering. With the group was a local veteran divemaster, Iván Díaz. As the group were surfacing from a dive, a powerboat moving at high speed entered the restricted area. MacColl saw the boat coming before her sons did; Louis (then 13) was not in its path, but Jamie (then 15) was. She was able to push him out of the way (he sustained minor head and rib injuries), but she was struck by the boat which ran over her. MacColl suffered severe chest injuries and died instantly. MacColl’s body was repatriated to the United Kingdom, and was cremated after a humanist funeral at Mortlake Crematorium in Kew. (by wikipedia)