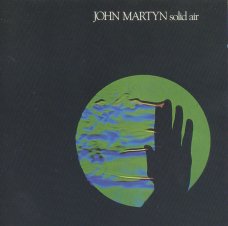 Solid Air is a folk jazz album released in 1973 by John Martyn on Island Records.

Contemporary reviews were favourable, with music weekly Sounds declaring that “Solid Air flows beautifully and shows the entire spectrum of music that John Martyn has at his fingertips.” The album has continued to receive acclaim and is included in the book 1001 Albums You Must Hear Before You Die by Robert Dimery. The album was rated as the 67th Greatest British Album Ever by the British music magazine Q, and was also included in their list of Best Chill-Out Albums Of All Time.

“Solid Air”, the title track, was dedicated to a friend of Martyn’s, Nick Drake.[4] Drake died of an antidepressant overdose 18 months after the album was released. Martyn said of the track “It was done for a friend of mine, and it was done right with very clear motives, and I’m very pleased with it, for varying reasons. It has got a very simple message, but you’ll have to work that one out for yourself.”

“May You Never” became something of a signature song for Martyn, becoming a staple of his live performances. Released in November 1971 as a single in an early form, the song was re-recorded during the Solid Air sessions.[5] Eric Clapton covered “May You Never” on his 1977 album Slowhand. When Martyn was presented with a lifetime achievement award by Phil Collins (a collaborator of Martyn’s) at the 2008 BBC Folk Awards, Clapton sent a message saying that he was “so far ahead of everything else it was inconceivable” and acknowledged the extent of his influence on “everyone who ever heard him.” Martyn and his band, including John Paul Jones on mandolin, played “May You Never” and “Over The Hill” at the Awards Ceremony.

In 2006, Martyn performed the album live in its entirety as part of the All Tomorrow’s Parties-curated Don’t Look Back series and subsequently toured the UK.

The album cover is an example of schlieren photography demonstrating the ‘solid’ nature of air. (by wikipedia)

By 1973, John Martyn – still at the tender age of 25 – had racked up five albums (two with then wife, Beverly). At the age of 17 his jazzy folk had caught the ear of Chris Blackwell of Island records and while he was a favourite on the club circuit prevalent in those far off days, he had yet to really define his sound. Solid Air changed all that for good.

The real breakthrough in Martyn’s sound had really come with the previous album, Bless The Weather. The reasons were threefold: Firstly he’d joined forces with a man with whom he’d be linked for decades to come – ex-Pentangle bass player, Danny Thompson. Danny’s double bass profundities were the perfect accompaniment to John’s fine finger picking. The second was the adoption of the Echoplex tape delay machine as his weapon of choice when it came to laying down the smoky, fuzzy vibe that made Martyn such a smoker’s choice in years to come. The third was his voice. Maybe by this point he’d done enough smoking (and drinking) to really let the slurry, laid back delivery kick in, but suddenly the combination of the modal picking and almost horizontal attitude made perfect sense.

Above all this was folk filtered through jazz. Take the inclusion of Tony Coe on sax throughout. His own slurred delivery was second to none (his was the sax on those Henry Mancini Pink Panther themes). Martyn, himself, was a fan of artists like Pharaoh Sanders, and it was this combined with the finest in British folk rock (most of Fairport Convention, including Richard Thompson, make an appearance here) that lifted Solid Air above previous efforts.

The album kicks off with Martyn’s lament for close friend Nick Drake on the vibe and sax-assisted title track. On the way we get the bluegrass jauntiness of Over The Hill (with its famously positive reference to Martyn’s favourite pastimes); the voguishly pastoral Don’t Want To Know, the Echoplex frenzy of his version of Skip James’ Rather be The Devil, and the eerily mournful Man In The Station (showing Martyn to be a master of the autobiographical soul-bearing that was to riddle his later album Grace And Danger). Of course the one track that most remember here is May You Never – his paean to brotherly love that was to be a staple of EVERY performance he’s given since.

Yes, it’s a classic with not a note out of place.. And ably assisted by John Wood’s late night production it’s now firmly esconced in the hearts of chillers, smokers and music lovers the world over. Everyone needs a copy. (by Chris Jones)