Getting Americanization of Ooga Booga released was evidently akin to pulling teeth, because MGM Records’ president was convinced it would be a bomb — what Hugh Masekela and his band had played at this early 1965 gig at the Village Gate was jazz, but it was too African-based for American tastes, or so the label chief maintained. What he missed was the infectious joy woven through every note of music here, which was enough to carry any kind of music from anyplace in the world over any unfamiliar patches, including the language, melodies, references to events, and places on the other side of the world; if this was to be New Yorkers’ (and the recording world’s) introduction to South African music, it was made incredibly genial and accessible, even from a jazz standpoint. The influence of Dizzy Gillespie and Freddie Hubbard can be heard, along with McCoy Tyner in the playing of pianist Larry Willis, and he shows his debt to John Coltrane as an inspiration on “Mixolydia” as well as his affinity for Brazilian music on “Mas Que Nada.” But the core sound was what Masekela called “township bop” — his short trumpet bursts, sometimes seemingly approaching microtonal territory, are engrossing celebrations of the melodies of his repertory, which is mostly of South African origin (including a pair written by his then-wife, Miriam Makeba).

Among the latter, the opening number, “Bajabula Bonke,” aka “Healing Song,” got its first airing on record here — it would later receive a bolder performance at the Monterey Pop Festival, comprising one of that event’s numerous musical highlights, but where that later performance streaked and soared, this one starts out slowly and quietly, exquisitely harmonized and rising gradually and gently like a glider catching rising winds; it’s impossible to fully appreciate the Monterey performance without hearing this one. With Herbie Hancock’s “Cantelope Island” providing one firm reference point in the American jazz idiom, the set really wasn’t that removed from 1965 listeners, as its stronger-than-expected sales proved. (by Bruce Eder) 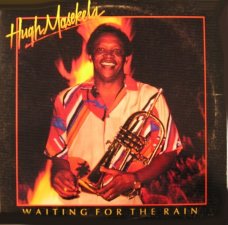 Hugh Masekela is a world-renowned flugelhornist, trumpeter, bandleader, composer, singer and defiant political voice who remains deeply connected at home, while his international career sparkles. He was born in the town of Witbank, South Africa in 1939. At the age of 14, the deeply respected advocator of equal rights in South Africa, Father Trevor Huddleston, provided Masekela with a trumpet and, soon after, the Huddleston Jazz Band was formed. Masekela began to hone his, now signature, Afro-Jazz sound in the late 1950s during a period of intense creative collaboration, most notably performing in the 1959 musical King Kong, written by Todd Matshikiza, and, soon thereafter, as a member of the now legendary South African group, the Jazz Epistles (featuring the classic line up of Kippie Moeketsi, Abdullah Ibrahim and Jonas Gwangwa).

In 1960, at the age of 21 he left South Africa to begin what would be 30 years in exile from the land of his birth. On arrival in New York he enrolled at the Manhattan School of Music. This coincided with a golden era of jazz music and the young Masekela immersed himself in the New York jazz scene where nightly he watched greats like Miles Davis, John Coltrane, Thelonious Monk, Charlie Mingus and Max Roach. Under the tutelage of Dizzy Gillespie and Louis Armstrong, Hugh was encouraged to develop his own unique style, feeding off African rather than American influences – his debut album, released in 1963, was entitled Trumpet Africaine.

In the late 1960s Hugh moved to Los Angeles in the heat of the ‘Summer of Love’, where he was befriended by hippie icons like David Crosby, Peter Fonda and Dennis Hopper. In 1967 Hugh performed at the Monterey Pop Festival alongside Janis Joplin, Otis Redding, Ravi Shankar, The Who and Jimi Hendrix. In 1968, his instrumental single ‘Grazin’ in the Grass’ went to Number One on the American pop charts and was a worldwide smash, elevating Hugh onto the international stage.

His subsequent solo career has spanned 5 decades, during which time he has released over 40 albums (and been featured on countless more) and has worked with such diverse artists as Harry Belafonte, Dizzy Gillespie, The Byrds, Fela Kuti, Marvin Gaye, Herb Alpert, Paul Simon, Stevie Wonder and the late Miriam Makeba.

In 1990 Hugh returned home, following the unbanning of the ANC and the release of Nelson Mandela – an event anticipated in Hugh’s anti-apartheid anthem ‘Bring Home Nelson Mandela’ (1986) which had been a rallying cry around the world. Volvo XC60 and Hugh Masekela

In 2004 Masekela published his compelling autobiography, Still Grazing: The Musical Journey of Hugh Masekela (co-authored with D. Michael Cheers), which Vanity Fair described thus: ‘…you’ll be in awe of the many lives packed into one.’

His story is far from over, and as Bra Hugh approaches his 75th birthday he shows no signs of slowing down. He maintains a busy international tour schedule as his fan base around the world continues to grow.

In June 2010 he opened the FIFA Soccer World Cup Kick-Off Concert to a global audience and performed at the event’s Opening Ceremony in Soweto’s Soccer City. Later that year he created the mesmerizing musical, Songs of Migration with director, James Ngcobo, which drew critical acclaim and played to packed houses. Songs of Migration will visit Amsterdam, London and Washington in October 2012.

In 2010, President Zuma honoured him with the highest order in South Africa: The Order of Ikhamanga, and 2011 saw Masekela receive a Lifetime Achievement award at the WOMEX World Music Expo in Copenhagen. The US Virgin Islands proclaimed ‘Hugh Masekela Day’ in March 2011, not long after Hugh joined U2 on stage during the Johannesburg leg of their 360 World Tour. U2 frontman Bono described meeting and playing with Hugh as one of the highlights of his career.

2012 has already been a busy year with Hugh just returning to South Africa from touring Europe with Paul Simon on the Graceland 25th Anniversary Tour. He has opened his own studio and record label, House of Masekela which has already put out its first release: Friends – a 4 CD collection of jazz standards featuring his dear friend, pianist Larry Willis.

Hugh is currently using his global reach to spread the word about heritage restoration in Africa – a topic that remains very close to his heart.

“My biggest obsession is to show Africans and the world who the people of Africa really are,” Masekela confides – and it’s this commitment to his home continent that has propelled him forward since he first began playing the trumpet. (official biography)

This is Hugh Masekela’s 2nd LP recorded in Botswana – close to his land South Africa but respecting the boycott of the apartheid regime. He’s been waiting for the rain and for freedom in South Africa. The LP starts off with Fela Kuti’s “Lady” and closes with “Zulu Wedding”.(by dial-africa.blogspot.de/) 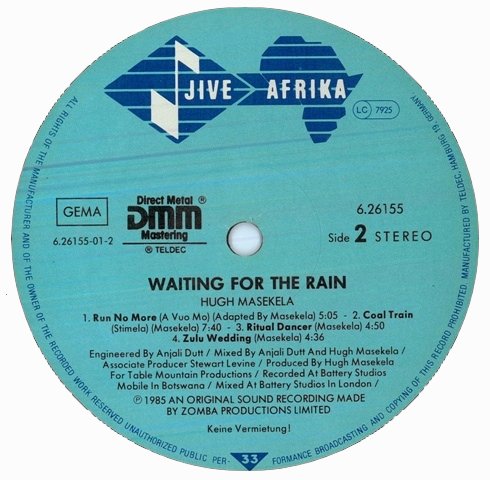