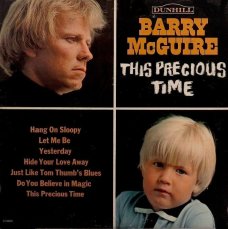 Following the success of the “Eve Of Destruction” single, Barry McGuire began working on another album for Dunhill Records with producer Lou Adler. Whilst he was recording he was reunited with some old friends from his folk days, as the newly-formed The Mamas & The Papas came to California. He invited them to sing backing vocals for him. The result of these sessions was This Precious Time, which took his music forward with a more sophisticated folk-rock-pop sound. It included one song written by John and Michelle Phillips of The Mamas & The Papas – “California Dreamin'” was first recorded here with the four of them singing backing vocals for McGuire’s lead. Other songs on the album included more P.F. Sloan compositions, The Lovin’ Spoonful’s “Do You Believe In Magic”, Bob Dylan’s “Just Like Tom Thumb’s Blues”, The McCoy’s “Hang On Sloopy” and two Beatles songs (“Yesterday” and “You’ve Got To Hide Your Love Away”).
The album, though a strong one, was not a chart success – perhaps the media backlash “Eve Of Destruction” caused had permanently tarrred McGuire’s name. “California Dreamin'” had all the makings of another obvious hit single, and he was going to release it, until John Phillips asked if maybe The Mamas & The Papas could release it instead. Impressed by what he saw, Lou Adler had signed them to Dunhill. They replaced McGuire’s vocal track and added a flute solo, but otherwise used the same recording. Released as a single, this version gave them a massive hit and launched their careers. (by stuckinthepast08.blogspot.com) 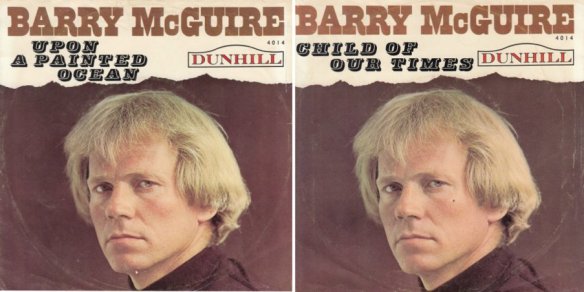 A real lost artifact, Barry McGuire’s second album actually has quite a bit of historical significance. After his mega-hit, “Eve of Destruction,” McGuire was set to do a follow-up album, complete with some excellent P.F. Sloan songs. During the early sessions, the Mamas & the Papas had just come into town. Being old friends of McGuire’s from the folkie days (Barry was the lead voice on “Green, Green,” by the New Christy Minstrels), he invited the group to audition for producer Lou Adler. The rest is history, and this record is essentially the Mamas audition, as they sing backgrounds on virtually all of the record. It’s magnificent, too. Hits such as “Do You Believe in Magic,” “Yesterday,” and others work perfectly with McGuire’s gravely lead voice and the Mamas & Papas sweet harmonies. McGuire even cut “California Dreamin’,” and it’s the exact same track as the famous Mamas version, sans Denny Doherty’s lead vocal and Bud Shank’s flute solo. If you’re looking to find the real roots of the Mamas & the Papas, here it is. Unfortunately, Dunhill apparently wanted little to do with Barry McGuire after the backlash of “Eve of Destruction,” and his career and this record presided in ignominy. Too bad, because there is a lot of excellent music here. (by Matthew Greenwald)

A real great albumm including an exciting version of the McCoys Hit “Hang On Sloopy” !

Active since the early 60s he joined the NEW CHRISTY MINSTRELS in 1962.
Signed by Dunhill he worked together with P.F.Sloan & S. Barri .
With Eve Of Destruction he reached the top of the charts.
After two further albums he made a break and came back with some ex-BYRDS
as BARRY McGUIRE & The DOCTORS in 1971.
In 1971 Ode Records released his most critically acclaimed album, ‘Barry McGuire And The Doctor’. Teaming up with Eric Hord (‘The Doctor’) the album featured members of the Byrds (Chris Hillman, Michael Clarke), Flying Burrito Bros (Sneaky Pete Kleinow), Dillard & Clark (Byron Berline) and the Eagles (Bernie Leadon). Despite the critics’ praise, sales for the bluegrass-tinged album were poor. Barry later noted that he doesn’t remember too much about the album, except for the mounds of cocaine he and the others consumed while recording it. Around this time McGuire starred in a tacky, low budget biker/horror movie called Werewolves On Wheels. But as Barry admits, the singer/songwriter was hitting rock bottom. 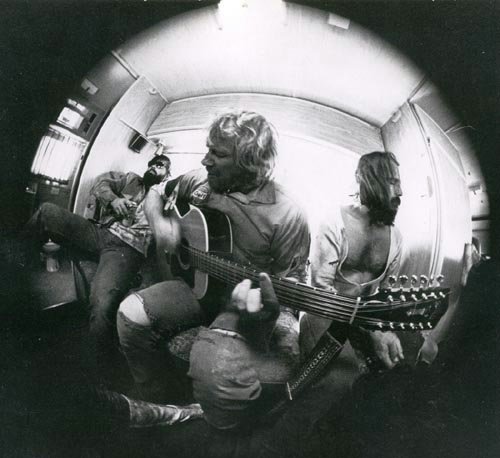 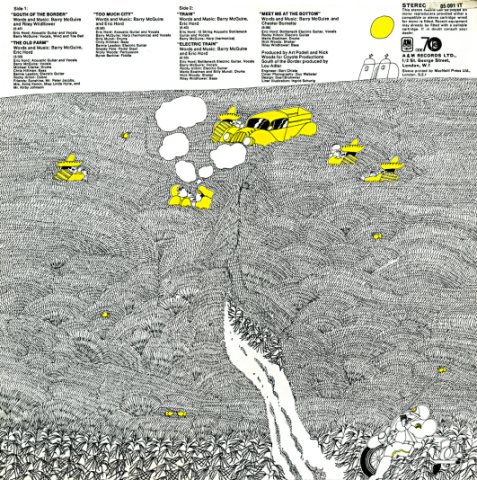