Morrissey–Mullen was a British jazz-funk/fusion group of the 1970s and 1980s.

Considered one of the most popular jazz groups in London,[3] the band was led by Dick Morrissey on tenor and soprano saxes and flute, and Jim Mullen on guitar, who joined forces in 1975, playing together for sixteen years, during which they came to be known as “Mr Sax and Captain Axe” because of their hallmark based around calls and responses between guitar and saxophone.

The band began in New York City, where Dick Morrissey and Jim Mullen were recording and touring with their mutual friends in the Average White Band and Herbie Mann.

Coinciding with the recording and release of the first of seven Morrissey Mullen albums (plus two EPs), Up (Atlantic, 1977), which featured Average White Band as a rhythm section, plus Luther Vandross and Cissy Houston on vocals, together with some of the New York’s session musicians, the Morrissey Mullen band spent eight months in New York. A six-week residency at New York’s Mikell’s, attracted the attention of many of the top musicians of the day, with Boz Scaggs, David Sanborn, Steve Gadd, Steve Ferrone, Richard Tee, George Benson, Ray Barretto, Michael Brecker and Randy Brecker, among others dropping by for a jam.

On their return to the United Kingdom, Morrissey Mullen concentrated on the small-club/pub circuit, with sell-out gigs at the venues they played at, including a residency at The Half Moon, Putney for many years. In 1979, EMI commissioned them to enter the Abbey Road Studios to make “Britain’s first digitally-recorded single record”, a cover of the Rose Royce hit “Love Don’t Live Here Anymore”. Their 1981 album Badness reached number one in the UK disco charts.

The band featured in the live sessions of Night Owls, a BBC Radio 2 programme presented by jazz writer and tenor saxophonist, Dave Gelly.

M&M’s backing band had various regular line-ups over its existence, featuring British jazz musicians such as Martin Drew on drums, John Mole (ex-Colosseum II) on bass, and Pete Jacobsen, John Critchinson, Martin Blackwell or John Burch on piano (with whom Dick Morrissey would also form an octet in 1984). Although early members of the band had included two top session musicians from New Zealand, Frank Gibson, Jr. on drums and Bruce Lynch on bass, the band was also a springboard for a new generation of young British musicians, including Chris Fletcher on percussion, Gary Husband on drums, Claire Hamill and Carol Kenyon as vocalists (both on whom appeared with Dick Morrissey on the 1981 Jon & Vangelis album The Friends of Mr Cairo), Tessa Niles, Linda Taylor and Noel McCalla.

Morrissey’s failing health required too many visits to hospital for the band to be viable. When M&M dissolved in 1988, Mullen and Morrissey continued meeting up for jam sessions with what they called, “Our Band”, usually featuring the same musicians that had accompanied them in M&M.

They appeared together at the 1991 Cork Jazz Festival in the Metropole Hotel in Cork, Ireland.(by wikipedia)

“This was the first album that we did when Pete Jacobsen joined the band on keyboards. ‘Southend Pierre’ was one of Pete’s compositions. We also did Pete’s arrangement of Steve Wonder’s ‘Visions’. (Jim Mullen). 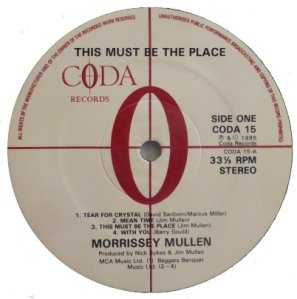