Anthony Michael “Tony” Mortimer (born 21 October 1970, Stepney, London) is an English singer, rapper, songwriter and composer. He is best known as a member of the boy band East 17, who were originally active from 1991 to 1997 and sold over 20 million records worldwide. Mortimer is also the writer of the band’s only number-one single, “Stay Another Day”.

Mortimer was a member of the 1990s boy band East 17, with whom he had seven UK Top 10 singles and four hit albums between 1992 and 1997. He turned to songwriting when the group disbanded in 1997, in the wake of fellow member Brian Harvey’s controversial comments about ecstasy. In 1998, Mortimer’s East 17 bandmates briefly reformed the group without him, and released two singles as E17. They disbanded again the following year.

In 2010, it was announced that East 17 would be reforming as a three piece (minus former lead singer, Brian Harvey) and that the band was seeking a new lead. In 2011, Blair Dreelan was announced as a new band member and the new lead singer. One single was released from the album Recharged, before Dreelan left the band due to a contractual obligation not to contribute to East 17, while he was still connected with his previous musical group.

Mortimer has continued as a record producer since 1997, from his studio in Essex, as well as recording his own songs including the single, “N Toxyc 8”.

Mortimer has also managed bands, including girl group Urban Angel, whose members included Roxanne Pallett, who wrote some of the group’s songs. The band broke up after Pallett won a role in ITV soap opera Emmerdale.

17 June 2013 he released his debut solo album Songs from the Suitcase.

In early 2014, Mortimer departed from East 17 to focus more on his solo career. (by wikipedia)

And this is his first solo-album and to understand this album, you must know, that Tony Mortimer was many, many year very ill … and this is his story:

Mortimer, the group’s songwriter, says he felt under pressure from the beginning. ‘They’d say: “We need you to do a new album now,” and I found writing to order very difficult,’ he admits.

‘You look around and think your songs are paying peoples’ mortgages. You see people spending money and think: “If I don’t write a hit, that’s the end of it.”’

By the time he left the group in 1997, following controversy after bandmate Brian Harvey made some ill-judged remarks about taking ecstasy, he was drinking whisky for breakfast.

Without the commitments of the band to take care of, Mortimer was soon drinking a bottle of whisky a day.

His attempts to reduce his drinking didn’t go well.

‘I’d try to have just one glass of wine with dinner, trying to be sophisticated but three bottles later, I’d think: “You haven’t got the hang of this,”’ he laughs.

‘The sad thing is, alcohol helps stop the anxiety but drink too much and you start acting aggressively.’

Mortimer began suffering from depression and would stay in bed for days on end.

‘I’d try to go out but I’d have panic attacks,’ he says. ‘Sometimes they’d happen before I’d even left the house. It got to the point where I didn’t want to go out at all.’

This downward spiral lasted several years, with Mortimer’s depression getting progressively worse until he contemplated killing himself.

‘It’s the hopelessness of it,’ he says. ‘It got to the point where I was suicidal. It’s just the hopeless outlook – you can’t see any way out other than ending it all but you look down that path and think: “This is a bit grim now.”

‘My brother committed suicide and I thought: “I’m not copying him.”’

Mortimer went to see a GP, who diagnosed depression.

‘They give you a form where you fill in questions,’he says.

‘He read my answers and said: “Yes, you’re severely depressed but we’ll get you help.” I didn’t realise I was depressed. I thought: “How can I be depressed? I’ve made loads of money and have a job people would die for.”

‘You only think of depression as affecting people who don’t have anything but anyone can get it.’ 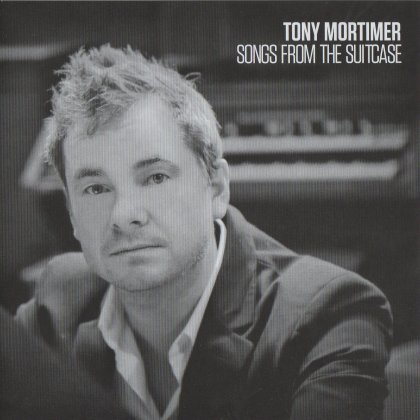 He gave up drinking for eight years and overcame his depression with medication and by seeing a therapist, who said he was also suffering from anxiety (Mortimer previously thought his reluctance to leave the house was due to agoraphobia).

‘Knowing what it is helps,’ he says. ‘I stopped drinking and had to face life sober, which made me pretty anxious. Now I face my fears and deal with things. When you get an anxiety attack, it’s a complete feeling of dread – you just think of everything that can go wrong but with the right techniques you can deal with the attacks.’

Mortimer found seeing a therapist so inspiring that he studied for a diploma in psychology. (by metro.co.uk)

From an interview with Tony Mortimer about this album:

You have spoken openly in the press about your struggles with depression, anxiety and panic attacks.  Have these issues been reflected at all in any of your new material?
Yes definitely. End Of The Line was captured in probably my darkest moment. I love capturing moments like this so I can look back on them in the future. Songs for me are like photos, with a week long exposure on my life at that time. Its interesting when I sing a song that comes from a place where you no longer are, tiny little freeze frames. ‘All I Got’ is also a song from around that time. I have made myself a promise to try and cheer up on my next album haha!