Still Crazy is a 1998 British comedy film about a fictional 1970s rock band named “Strange Fruit”, who, after being split up for two decades, are persuaded to get back together to perform at a reunion of the same concert venue where they played their last gig. The film focuses on the personal lives of the band members and those closest to them, and their individual experiences with approaching middle-age and the success that eluded them.

It was nominated for two Golden Globes in 1999.

The band Strange Fruit performs at the 1977 Wisbech Rock Festival. Hughie Case tells how, due to the pursuit of “fame, fortune and fornication” – and the drug overdose of their original singer, Keith Lovell – this is their last performance. After various issues, the band prematurely ends their performance, frustrated over competing egos and various members’ lack of self-control.

Twenty years later, a stranger who turns out to be the son of the founder of The Wisbech Rock Festival recognises keyboardist Tony Costello and convinces him to reunite the band for a special anniversary of the event. Tony quickly tracks down Karen Knowles, the band’s original runaround-girl. Initially reluctant, she is inspired to return to the band after finding memorabilia. She insists on being the band’s manager, and Tony

agrees. Gradually, Karen and Tony track down the original members: bassist Les Wickes, who has a family and works as a roofer; drummer David “Beano” Baggot, who is working at a nursery and is on the run from the Inland Revenue; and lead singer Ray Simms, who, after years of drug and alcohol abuse, is now completely sober. Though he claims to be working on a solo album, Simms has not released anything in almost ten years.

The band meets up at the Red Lion pub to discuss the reunion. Everyone expects Brian Lovell, the band’s lead guitarist, to be there. Karen says she was unable to find him but learned he donated away all his royalties to charity; everyone assumes he is dead. Their roadie, Hughie, turns up during their first rehearsal to resume his original role. Ray insists on playing guitar but is convinced to concentrate on singing. They find a replacement for Brian in young Luke Shand, a talented guitarist who remains blissfully unaware of the band’s internal tensions.

Following a warm up tour of Europe, Karen negotiates for the rights to their back catalogue. Their initial performances are poorly received. Les, Beano, and Hughie hold little hope for the band, believing Keith and Brian the main talent. Tony makes advances on Karen, but she resists due to her attachment to Brian. At one of their gigs, Ray’s over-the-top ideas backfire, and Les and Ray walk off the stage. Following a confrontation with Les, Ray has a nervous breakdown, exacerbated by turning 50. Ray leaves the gig, buys drugs, and falls into a canal. Karen’s daughter rescues him, and Ray’s wife blames Karen for his troubles. Following an angry reaction from the townspeople over the volume levels, the band escape to their bus and flee the town. 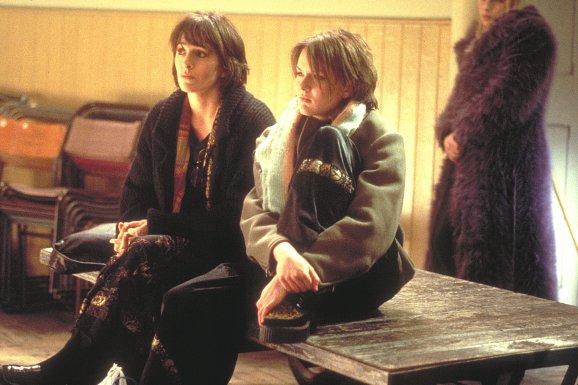 Les and Ray make up, and Ray says he “received a positive message” from Brian’s ghost. The bus breaks down, and Karen confronts the band about their lack of confidence. When the band meet a girl wearing a Strange Fruit tour T-shirt that belonged to her father, they take it as another positive omen. The next few shows go without incident and are well-received; the band becomes slightly more optimistic. Following a record deal, the band records a new song written and sung by Les, which Ray had never previously allowed. However, after watching a previously-taped drunken TV interview in which Les and Beano imply that the band was much better with Keith and Brian, Ray breaks down again and quits.

As the band members return to their former lives, Karen and Claire visit Keith’s grave to pay their respects. They find a note that quotes “The Flame Still Burns”, a tribute to Keith written by Brian. Hughie is then confronted by Karen, and reluctantly admits he knows Brian is alive. Karen and Tony find Brian in a psychiatric hospital. He explains he gave up his material possessions to sever himself from his previous life. When he agrees to rejoin the band, the others follow. However, at a pre-show press conference, hostile questions cause Brian to walk out. Everyone but Luke follows, and Luke chastises the journalists. Visibly shaken, Brian decides to back out of the show but gives his blessing.

Beano nearly misses the set when a stalker-groupie demands sex. The band starts their set with the same song with which they opened up the last Wisbech Festival. Though Ray’s confidence is shaken, Tony saves him by playing “The Flame Still Burns”. Brian is pleased to hear the band playing the song, which helps him finally overcome his demons and joins the band onstage to play an inspiring guitar solo, much to the surprise and delight of everyone. (by wikipedia)

Twenty years after Strange Fruit’s highly publicized breakup in 1978 at the Wisbech open-air festival, the band-keyboardist Tony, who was working as a condom salesman in Ibiza; bassist Les, now a roofer in the frozen North of England; drummer Beano, leading a reclusive existence in his mother’s garden; ultra-vain lead singer Ray, living beyond his means with his second Swedish wife; and Brian, the fragile lead guitarist who is currently MIA-is persuaded to get back together for a reunion concert, Wisbech 1998. STILL CRAZY charts their increasingly desperate efforts to recapture the magic, the music, the lost opportunities and the missed performances of their prime. (by rottentomatoes.com)

And here´s the sound of this great movie … :

The film Still Crazy is the story of the fictional ’70s British rock band Strange Fruit. After showing their breakup in the late ’70s, the movie follows the groups attempt to reunite in the late ’90s. An obvious spoof of many bands from that era currently on the oldies circuit, it gave some good insight into how difficult it is for these bands to recapture their former glory. While the film was only a modest success, this 14-track album manages to recreate the style and at the same time pay tribute to stadium rock bands like Styx, Blue Oyster Cult, Grand Funk Railroad, and even Lynyrd Skynyrd.

The opening song “Flame Still Burns” was delivered at a pivotal moment in the film when the group stood stone faced in front of a festival crowd of 50 thousand. It is a sprawling eight-minute “Free Bird”-esque rock anthem with a dazzling final guitar solo. The track, which is the films strongest, captures the essence of this genre and the rest of the album struggles to keep up. There are a few decent tracks including the gritty “Dirty Town” and the operatic “Scream Freedom,” both of which hold up rather well when disassociated from the film. Even with a few weak songs this album serves as a decent tribute to the misunderstood beauty of ’70s stadium rock. (by Curtis Zimmermann)

Great soundtrack, brilliant movie. Bill Nighy was superb in his role as the ageing vocalist and carries off the Strange Fruit material with surprising ease, especially on the excellent ‘All Over The World’ & ‘Scream Freedom’. I would definately check out the movie first – you will enjoy this excellent soundtrack all the more. (by jez)

Chris Difford of Squeeze fame won an Ivor Novello award for his lyrics. Here´s one of the finest songs from this album:

Cornered now, what can I do
I’m trapped by what might have been
The great big ‘if’ that hangs around my neck
Has played its part in all my dreams
Always making the bad seem worse
Living my life reversed

Another great song is “All Over The World”:

All over the world
Tonight

All over the world
Tonight

And then the acoustic version of “Brian’s Theme” and of course “The Flame Still Burns” (written my Mick Jones from Spooky Tooth” and “Foreigner”), a monster of song ! And I guess, this is the theme of my life !

I live a life that’s surreal
Where all that I feel I am learning
Oh life, has been turned on the lathe
Reshaped with a flame that’s still burning
And in time, it’s all a sweet mystery
When you shake the trees of temptation
Yeah and I, I know the fear and the cost
Of a paradise lost in frustration
And the flame still burns
It’s there in my soul for that unfinished goal
And the flame still burns
From a glimmer back then
It lights up again in my life
In my life, yeah
I, I want my thoughts to be heard
The unspoken words of my wisdom
Today, as the light starts to flow
Tomorrow who knows who will listen
But my life has no language in love
No word from above is appearing
Oh the time, in time there’s a fire that’s stoked
With a reason of hope and believing