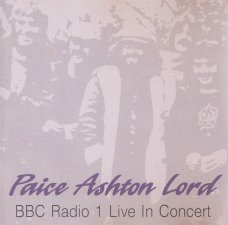 Paice Ashton Lord was a short-lived British rock band featuring Deep Purple band members Ian Paice and Jon Lord with singer Tony Ashton. The band was formed in 1976, released its only album in 1977 and broke up in 1978.

After Deep Purple broke up in 1976, drummer Ian Paice and keyboard player Jon Lord created a new band, Paice Ashton Lord, with friend Tony Ashton, a British keyboardist and singer of Ashton, Gardner and Dyke. After extensive auditions they chose Bernie Marsden to play electric guitar and Paul Martinez as the band’s bassist.

Tony Ashton had previously played with Lord on the 1974 album First of the Big Bands and on Lord’s Gemini Suite project in 1971, singing lead vocals on one track. He collaborated on Lord’s solo work and Deep Purple bassist Roger Glover’s solo projects.

Soon after Ashton broke his leg falling off a stage in the dark at a London concert, the group was wound up. Lord, Marsden and later Paice joined David Coverdale’s Whitesnake. Martinez joined Stan Webb’s Chicken Shack for a short time, before joining John Otway for one album, and going on to play with Robert Plant. Later on, Paice played in Gary Moore’s band before he and Lord joined the re-formed Deep Purple in 1984. 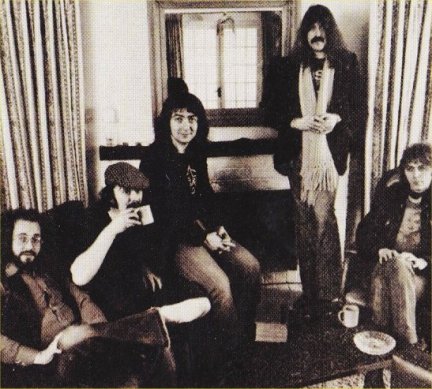 The band recorded their debut album Malice in Wonderland at Musicland Studios in Munich in September and October 1976. The record was released in February 1977. The music included elements of rhythm and blues, funk and soul, with several tracks featuring a brass section and backing vocals from Sheila and Jeanette McKinley.[2] Despite some critical appreciation, the album was not a great commercial success. A second album was planned but was not released. 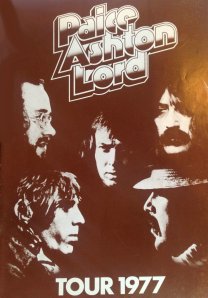 Film of the band recording the album in the studio was later released as Lifespan.

The band appeared on the BBC2 & BBC Radio 1 simulcast series “Sight And Sound: In Concert”, in 1977, performing songs from “Malice In Wonderland”, plus “The Ballad Of Mr. Giver”, from Ashton & Lord’s 1974 album, First of the Big Bands. This recording was later released, subsequently with a DVD. (by wikipedia)

Recorded in 1977, on the tails of the post-Deep Purple supergroup’s Malice In Wonderland album, this extremely well-recorded broadcast catches the trio (and friends) stretching out in directions that the album itself never managed. On vinyl, after all, PAL sounded constricted, forever teetering on the brink of a no-holds-barred jam, but never quite mustering the strength to leap in. On stage, however, the improvisational instincts that Paice and Lord had built their very reputations upon were given full rein to spread and stretch.

All but two songs from the album are included, and each is effortlessly superior to its studio counterpart — “Ghost Story” is especially effective, while the funky motions that Malice hinted at explode into view. One cannot simply marvel at what was included in the band’s live set, however; one should also applaud Paice Ashton Lord for what they didn’t play. At a time when other ex-Deep Purple-ers were blithely grafting great swathes of that band’s repertoire into their solo shows, PAL resolutely avoided even a hint of such things. (For Ashton fans, meanwhile, there’s no “Resurrection Shuffle” either.)
The result is what could (and should) have been a whole new beginning for the three mainmen of PAL, and one of the best live albums you’ll find anywhere in the Deep Purple family tree. (by Dave Thompson)

Recorded live on 10th March 1977 at the Golders Green Hippodrome in London for the BBC’s In Concert-series. 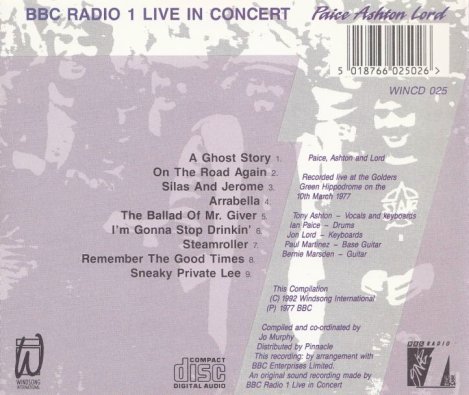 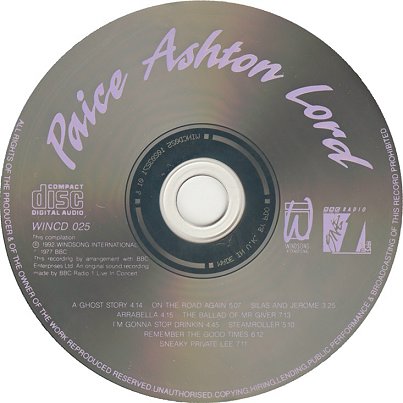 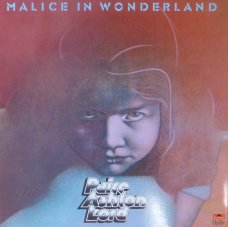 Malice in Wonderland is the only studio album by Paice Ashton Lord. It was released in 1977.

Once they had decided to leave and disband Deep Purple, Paice and Lord began to plan a very different type of band, built around a trio of themselves and long time friend Tony Ashton, who was to handle the vocals and share keyboard duties. Ashton, Gardner & Dyke had supported Deep Purple in the early seventies, and shared management. Jon Lord found he got on well with Ashton, and helped AGD out in the studio culminating in the superb western soundtrack ‘The Last Rebel’ which the pair co-wrote and performed on.

In 1974 Ashton and Lord finally finished the “The First Of The Big Bands” album (started three years before), influenced by the Phil Spector wall of sound idea. The album did not sell well, despite a BBC In Concert appearance and an all-star show in London, but did establish the heavy r’n’b foundations on which PAL were to build. To complete PAL, mysterious “guitarist and bassist wanted” press ads appeared in July 1976, and from the auditions guitarist Bernie Marsden (ex of Cozy Powell’s Hammer and Babe Ruth) and bassist Paul Martinex (from Stretch) were signed. Work then got underway on a debut album, the group accompanied off and on by a film crew for the eventual PAL documentary ‘Lifespan’. Jon Lord also broke off to help promote his latest (and some would say best) solo album Sarabande before finishing off the PAL album.

PAL’s debut Malice In Wonderland in March 1977 got a mixed reception and a European tour was cancelled in favour of just five UK dates during which PAL expanded to an 11-piece group with a brass section and girl backing singers. A nervous world debut on BBC TV’s ‘Sight And Sound In Concert’ was with hindsight a PR blunder, and showed how uneasy Tony Ashton was fronting a band launched on such a grand scale but even so most of the subsequent gigs were packed and Tony enjoyed himself more when able to communicate a little with the first few rows. Paice and Lord tried unsuccessfully to bring in David Coverdale to take the pressure from Ashton’s shoulders (he was also being headhunted by Uriah Heep around the same time), before eventually deciding in early 1978 to cut their losses and call it a day with work on a second album abandoned (some tracks later being unearthed for a CD reissue).

David Coverdale in turn brought Bernie Marsden into his new band Whitesnake, and a few months later managed to tempt Jon Lord into the fold. Ian Paice followed in mid 1979. Tony Ashton returned to sessions (appearing on one or two of Lord’s solo albums), production, occasional live work and painting. An all-star concert in his honour was held at Abbey Road in 2000 which included the only PAL reunion, with all the original group except for Martinez taking part. Tony Ashton was quite ill by this time and sadly passed away in 2001. (by deep-purple.net)

Paice Ashton Lord’s sole album is a rather anonymous-sounding late-1970s hard rock/AOR effort. There’s more funk, soul, boogie, and jazz influence than you would expect from Deep Purple alumni, but at heart these are typical period mainstream rock songs that don’t lend a distinctive personality to the short-lived band. There’s an outrageously blatant quote from Blood, Sweat & Tears’ “Spinning Wheel” in “Silas & Jerome.”

The 2001 CD reissue on Purple Records adds eight bonus tracks from the sessions for their unreleased second album, which are of a similar but less polished quality. Some of the songs are instrumentals rather than fully worked-up compositions, and the fidelity on a few of them is substandard, though not truly bad. The liner notes for the reissue give a thorough history of the band. (by Richie Unterberger)

And the bonus tracks from the unreleased second album are fucking good … listen to “Steamroller Blues”, “Moonburn” and to all the other tracks … and you´ll know wha I mean ! 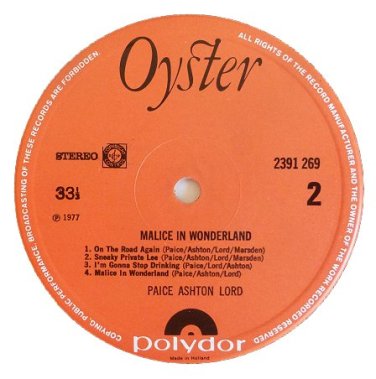