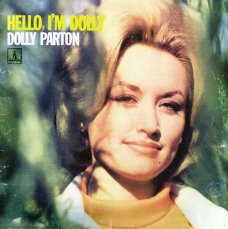 Hello, I’m Dolly is the debut studio album by American singer-songwriter Dolly Parton. It was released in September 1967, by Monument Records. The album’s two hit singles are largely credited with bringing Parton to the attention of Porter Wagoner, who, in September 1967, would invite Parton to join his band and appear on his weekly television show.

The album contains Parton’s versions of three songs she had written that had already been hits for other artists; “Put It Off Until Tomorrow” (Bill Phillips), “Fuel to the Flame” (Skeeter Davis), and “I’m in No Condition” (Hank Williams Jr.).

Following the success of Parton’s singles and being signed to appear on Porter Wagoner’s show, Billboard published a review of the album in the issue dated October 28, 1967, saying, “Dolly Parton has a little girl voice but it’s Lolita in style on the honky-tonking, carousing “Dumb Blonde”. She also does extremely well on “I Wasted My Tears”, “I Don’t Want to Throw Rice”, Something Fishy” and “Fuel to the Flame”. 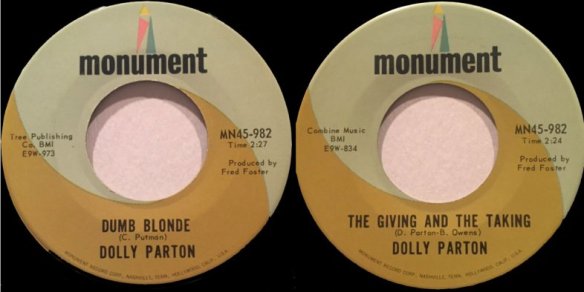 Cashbox published a review which said, “Dolly Parton could have a big winner in her possession with this striking album. Singing at the top of her form throughout the entire set, the lark offers “Dumb Blonde”, “Put It Off Until Tomorrow”, “Fuel to the Flame”, “The Giving and the Taking”, and eight others. Give this one a careful listen. It should pull in a healthy amount of chart action.”

The album peaked at No. 11 on the US Billboard Hot Country Albums chart.

The charismatic Dolly Parton came on strong with these early session for Monument. At least half the songs are among her classics, while the rest of the material is hardly weak. The pedal steel playing is fantastic, and it would be worth the research to find out who the session men were, as they have gone uncredited on the original release, as well as subsequent repackagings. (In one two-fer release combining this album with As Long as I Love, the label squandered the inner gatefold on self-advertising rather than provide any information about these wonderful sessions.) The personality that Parton brought to her material is here in full force. “Dumb Blonde” and “Something Fishy” are the wisecracking, smart-cookie side of Parton, while “The Company You Keep”and “I’ve Lived My Life” show how adept she is at cramming country songs full of moralizing while providing the listener with plenty of enjoyment. (by Eugene Chadbourne)

The artists performing on this album are amongst the all-time greats of country music, and between them they cover every style.

From the happy welcoming voice of Porter Wagoner to the deep emotive tones of Waylon Jennings, via the plaintive Skeeter Davis and the smooth Jim Reeves, not forgetting the brilliant guitar picking of Chet Atkins.

Country music at its very best represented by artists who are some of country music´s best ambassadors, as demonstrated by their visits to the United Kingdom.

The lovely Dottie West, a firm favourite at the Country Music Festival, Jerry Reid, who has a string of hitsto his credit as well as having written several hit songs for other artists; Don Gibson, who have besides having a fine voice, is also a well known songwriter, Dolly Parton, the beautiful lady of song, who in addition to her solo recordings, also duets with Porter Wagoner, and still finds time to compose.

Finally, there is the immortal Jim Reeves, who became a legend in his life-time, but whose popularity still lives on nearly a decade after his tragic death.

This then, is your opportunity to hear some of the finest country songs ever written, as presented by the musical “giants” of country music, and happily this opportunity “knocks” more than once. (taken from the original liner notes) 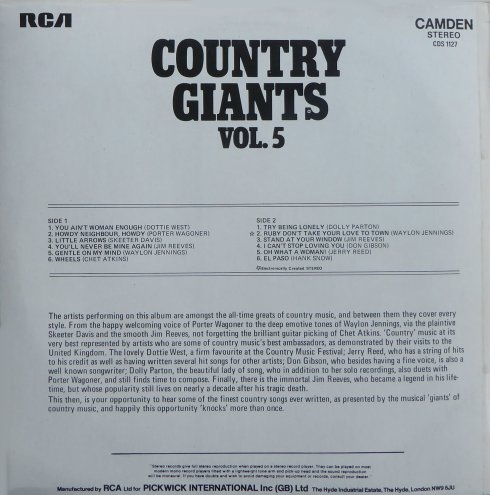