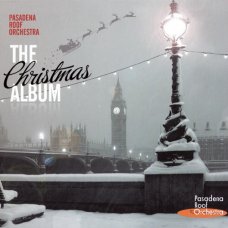 The Pasadena Roof Orchestra presents its very first Christmas Album. All the tracks are carefully selected Christmas favourites drawn from the Orchestra’s extensive repertoire, and capture the very essence of a vintage Christmas celebration.

A Christmas album from an established artist is normally high up on the recording agenda. In this respect it might be fair to say this album is somewhat overdue, especially as the Orchestra had a radio hit with “White Christmas” in the 70s. A little research into seasonal songs from the 20s, 30s and 40s reveals a wealth of material, and whilst some of these tracks will be very familiar, others not so. “It’s Winter Again” or “I’m Going Home for Christmas” for example are welcome new additions to a Christmas playlist.

The styles on this album range from a pure Norman Rockwell like “Rudolph the Red Nosed Reindeer” to an out and out swinging Dorsey style “Santa Claus is Coming To Town”. It starts with a Simon Townley inspired “Christmas Stomp” – listeners who can spot all the tunes in this medley can award themselves an extra mince pie! 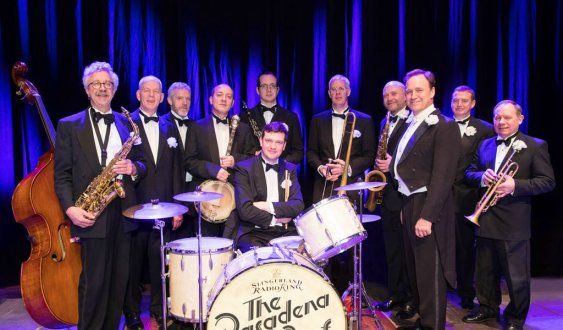 The Pasadena Roof Orchestra has been playing swing and hot dance jazz for over 40 years, releasing roughly 40 albums in that span. The London based outfit is extremely popular throughout Europe and, of late, in Japan. The founder of the group, John Arthy, was the last original member of the group when he retired in 1997. But the band goes on. Arthy founded the band upon having discovered a trunk full of original band arrangements from the 20s in an attic, so the bulk of the band’s repertoire is 20s and 30s, but they don’t always limit themselves to pre-war material (“The Christmas Album” being a good example; the song “Rudolph The Red-Nosed Reindeer” made it’s first appearance in song on the radio in 1948). (stubbyschristmas.com) 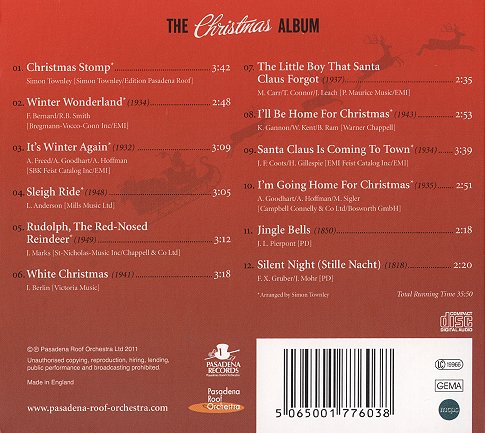 More from The Pasadena Roof Orchestra:

The Pasadena Roof Orchestra was formed in Nov. 1969 by Johnny Arthy, a lover of 1920’s jazz who sought to lead a dance-oriented jazz-influenced big band specializing in music from the 1923-37 period. The British band gained its name because Arthy liked the obscure song “Pasadena.” The orchestra had its first gig in April 1970 and soon Arthy came across a windfall, 1, 500 original arrangements from the 1920’s practically given away by an elderly lady whose father had been musical director of a dance band in the twenties. The P.R.O. started out playing once a week but, after the success of their first album in 1974, they turned professional and began working much more often. A European tour in 1975 added to the group’s momentum and since then they have worked constantly and recorded fairly regularly (in the early days for Transatlantic and later on mostly for their own P.R.O. label). No famous soloists are among their alumni since the Pasadena Roof Orchestra is very much a dance band, but the group has long featured colorful ensembles, period vocals and brief individual spots, very much in the early pre-swing style which they treat with great respect. (by Scott Yanow)

And here´s another delightful sentimental journey … this was their third album and it´s a really pretty good one !

The Pasadena Roof Orchestra (commonly abbreviated to PRO) is a contemporary band from England that specialises in the jazz and swing genres of music of the 1920s and 1930s, although their full repertoire is considerably wider. The orchestra has existed since 1969, although the line-up has frequently changed. It has achieved success outside of the United Kingdom, most notably in Germany.

The Pasadena Roof Orchestra was formed in November 1969 by John Arthy, a baker who moonlighted as a BBC session bass player. Arthy discovered a cache of original musical arrangements dating from the 1920s in an attic and on the strength of this find decided to form his own band. The name of the band was inspired by Harry Warren’s (Home in) Pasadena. There was a strong revival movement for music of the 1920s at the time (known as the Trad/Rad movement; other rival bands included The Temperance Seven); however, Arthy moved this new band in a different direction to most of the revivalists: away from humour and towards more serious, dedicated renditions of the music. 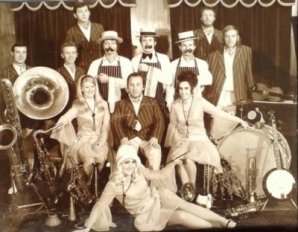 The orchestra’s first vocalist was John “Pazz” Parry, an old friend of Arthy’s (the two had both been members of The Water Rats Jazz Band). With Arthy as Bandleader and also performing on the double bass and sousaphone, the PRO soon grew in popularity.

The orchestra became professional in 1975. Their first LP was recorded in Autumn 1974 and released the following Spring, premiering at the Midem music fair in Cannes. The orchestra followed this by touring West Germany (where the revival movement was incredibly popular) in the Autumn of that year.

The orchestra toured the United States in 1993 and 2001 (their 25th Anniversary album cover featured a photo of the band in front of the Ambassador Theatre in Pasadena, California). They have worked with musical luminaries such as Robbie Williams (in 2005) and Bryan Ferry (in 2000).

Although John Arthy retired in 1997, the band continues to tour and record with bandleader and singer Duncan Galloway. In 2009, the orchestra toured Great Britain and Germany. (by wikipedia)

And this is their beautiful debut-album recorded in 1974 … :
No famous soloists are among their alumni since the Pasadena Roof Orchestra is very much a dance band, but the group has long featured colorful ensembles, period vocals and brief individual spots, very much in the early pre-swing style which they treat with great respect. (by Scott Yanow) 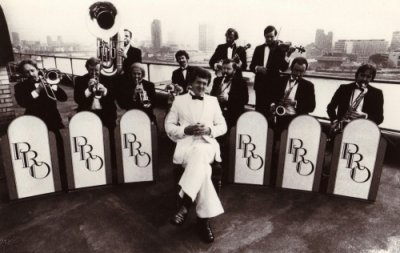