Franz Benda or Czech: František Benda (baptised 22 November 1709, Benátky nad Jizerou – 7 March 1786, Potsdam) was a Bohemian violinist and composer, who worked for much of his life at the court of Frederick the Great.

Benda was born in Benátky nad Jizerou in Bohemia, the son of Jan Jiří Benda. His brother was the composer Jiří Antonín Benda (Georg Anton Benda). Benda’s daughter Juliane Reichardt (1752–1783) and his granddaughter Louise Reichardt (1779–1826) were also composers. Benda wrote his autobiography in 1763: it not only gives a detailed account of his own life but also a valuable record of the lives of other musicians whom he encountered during his career.

In his youth Benda was a chorister in Prague and afterward in the Chapel Royal at Dresden. At the same time he began to study the violin, and soon joined a company of strolling musicians who attended fetes, fairs, etc. At eighteen years of age Benda abandoned this wandering life and returned to Prague, going to Vienna, where he pursued his study of the violin under Johann Gottlieb Graun, a pupil of Tartini. After two years he was appointed chapel master at Warsaw. In 1732, he entered the service of Frederick the Great, then crown prince of Prussia, with whom he remained the rest of his life. He was a member of the crown prince’s orchestra, and later became concertmaster to the king. He played about 50,000 concertos over a period of forty years. At Benda’s request, Frederick allowed his parents and siblings to move to Potsdam when, as Protestants, they suffered religious persecution in Bohemia.

Benda was a master of all the difficulties of violin playing, and the rapidity of his execution and the mellow sweetness of his highest notes were unequalled. He had many pupils and wrote a number of works, chiefly exercises and studies for the violin.

Benda died in the Nowawes, a small colony near Potsdam set up by Frederick the Great to house Protestant refugees fleeing religious persecution in Bohemia.
Legacy
Descendants of Benda also continue in the same musical line. In the 20th century, František Benda was a composer of film scores and other works. The Benda Chamber Orchestra, which carries and honours the name of the Benda musical family, was founded in 1956 in Ústí nad Labem, Northern Bohemia (Czech Republic). (by wikipedia) 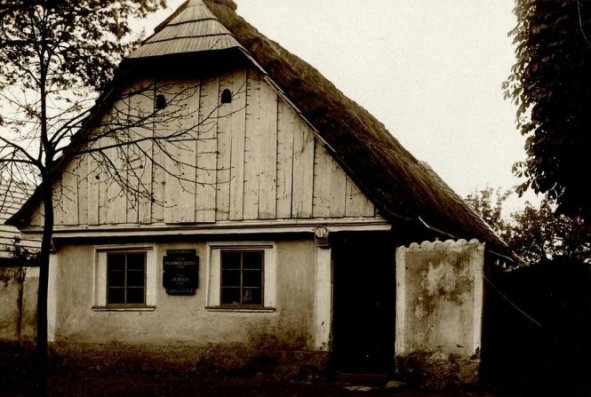 Benda was one of the most illustrious, possibly the single most illustrious, Czech violinist of the eighteenth century. Yet fewer than twenty concertos of his concertos for his own instrument have survived. The intimate nature of the music making suits the performances, and indeed the nature of the compositions themselves. These are pleasantly old-fashioned, more akin to Vivaldi than an Italian contemporary like Tartini – akin to Vivaldi, yes, in a sense, but rather lacking the flair, panache, colour and hubristic danger of Vivaldi.

Which is not to suggest that they are not worthy or exciting in their own way. The C major has a forceful first movement, but the slow movement remains in the memory more for its character than for any true melodic distinction. The finale is probably the finest of the three movements, fizzing with energy and clever contrasts between ritornellos and the vivid, slashing solo violin. Here, for sure, one feels the impress of Vivaldi’s spirit. Here, too, one can tentatively gauge just what sort of virtuoso Benda must have been. The confident, fluent, Italianate lyricism that floods the E flat major is aerial in its finesse, showy in places, whilst not achieving much true distinction. Someone else added extraneous parts to the D major – let’s name him; Johann Georg Pisendel, who was a friend, and led the Dresden court orchestra which, because it was larger than the orchestra for which Benda wrote, needed something ‘extra’ to play. Finally there is the later A minor Concerto, a rather more ‘affetuoso’ work with a melancholy cadenza. Here we find Benda being just a touch too liberal with his expressive caesurae, just a little artificial and over gallant. The finale, though, is rollicking good fun. 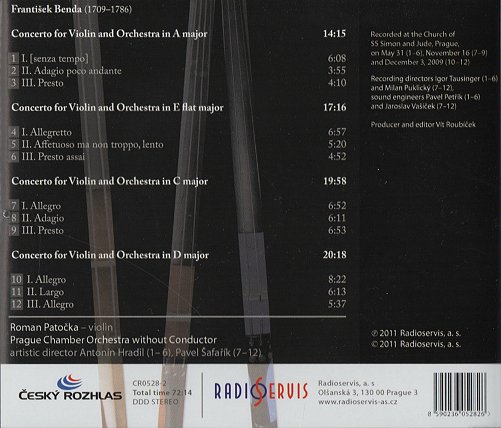