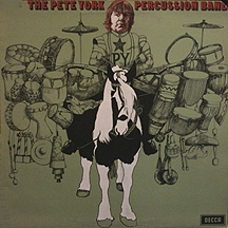 After the split of “Hardin & York” Pete York formed his first own Group, The Pete York Percussion Band …

“By 1972 Pete York’s Percussion Band had hit the road. It featured a brass section and three drummers as well as guitarist/singer Miller Anderson. Occasional guest drummers in this adventure were Ian Paice, Keef Hartley, Roy Dyke and Keith Moon.” (as told by Pete York).

But for this studio recordings he jammed with old friends from the Birminham jazz-scene … and the album was co-produced by Ian Paice from Deep Purple, an old friend of Pete York.

And they Play during these days of Prog-Rock an great old fashioned jazz Album with lot´s of drums and percussion (of Course) and a real string brass section.

One hightlight is a ten Minute jam “Sombrero Sam ” (written by Charles Lloyd).

Another highlight is a classical jazz Version of “The Arrival Of The Queen Of Sheba” (written by the German baroque composer George Frideric (or Frederick) Handel) … Great !

A few months later Pete Yorks Percussion band recorded a great concert for the “BBC In Concert” series featuring Ian Paice and Jon Lord … you will hear this Show very soon in this blog.

I guess, this is one of the rarest Pete York recordings and it´s real good one!