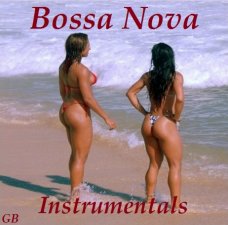 Bossa nova is a style of Brazilian music, which was developed and popularized in the 1950s and 1960s and is today one of the best-known Brazilian music styles abroad. The phrase bossa nova means literally “new trend” or “new wave” A lyrical fusion of samba and jazz, bossa nova acquired a large following in the 1960s, initially among young musicians and college students. (by wikipedia)

In the late 1950s and early ’60s, songwriters like the classically-trained Antonio Carlos “Tom” Jobim and the soft-voiced guitarist João Gilberto created a smoother, jazz-influenced version of the Samba – which itself was a product of the nation’s poorer classes. Middle-class Brazilians preferred the newer sound, which was dubbed Bossa Nova, or “The New Way.” Bossa Nova is velvet sophistication atop a feathery five-against-four rhythm, and is most famously epitomized by Gilberto’s “Girl from Ipanema.” American jazzmen like Stan Getz – who went on to collaborate frequently with Gilberto and Herbie Mann visited Brazil and brought the Bossa Nova to international attention. Some commercial distortion followed, but Bossa Nova continues to influence modern Brazilian pop and other regional styles today. (by urbandictionary.com)

And: the music is much better than this more or less silly cover … !!! 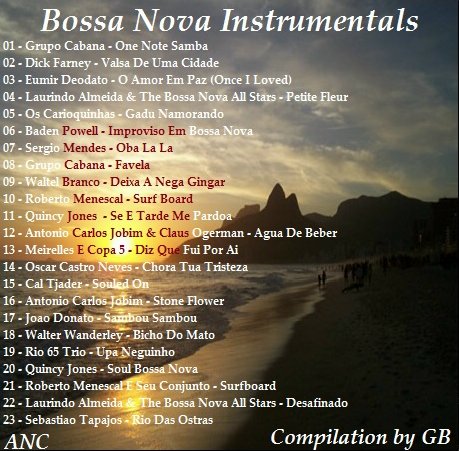 Baden Powell de Aquino, usually known simply as Baden Powell (Portuguese: [ˈbadẽ ˈpaw]; 6 August 1937 – 26 September 2000), was one of the most prominent and celebrated Brazilian guitarists and guitar composers of his time. He combined classical techniques with popular harmony and swing. He performed in many styles, including bossa nova, samba, Brazilian jazz, Latin jazz and música popular brasileira. He performed on stage during most of his lifetime. (by wikipedia)

In 1967 Baden Powell recorded his first album in Germany:
Poema On Guitar. This was his second record on the German SABA label and again Joachim Ernst Behrend was the producer. What can be said about Tristeza on Guitar can be found on this record, too. Both are among his best instrumental recordings of the sixties.

After his appearance in the Berlin Jazz days on November 5th Joachim Ernst Behrend organised first class musicians for the recording sessions: Eberhard Weber on bass, Sidney Smith on flute and Charly Antolini on drums.
Baden Powell was so impressed with this rhythm group that he wanted to return to Germany to record more with them. But only in 1971 he recorded two albums with the well appreciated Eberhard Weber.

A possible interpretaion of this record can be done on the selection and order of the songs: it could be seen as personal reminiscence of Sylvia Telles, who died on December 17th 1966. Feitinha, the girl, followed by Dindi, dedicated to her, Consolacao, comfort and melancholy Tristeza e Solidao.

On the second side there are baroque elements combined with Jazz: Samba triste, BP’s first hit in Brazil and his opening piece in the Berlin Jazz days, Euridice, calling from the realm of the dead, All the things you are, in a very beautiful arrangement for accoustic guitar, and Reza, a prayer, sung in 1966 by Edu Lobo in the last tour with Sylvia Telles. (by brazil-on-guitar.de)

Enjoy this wonderful piece of music by the great Baden Powell ! 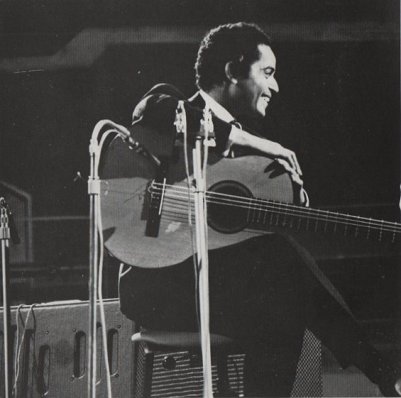 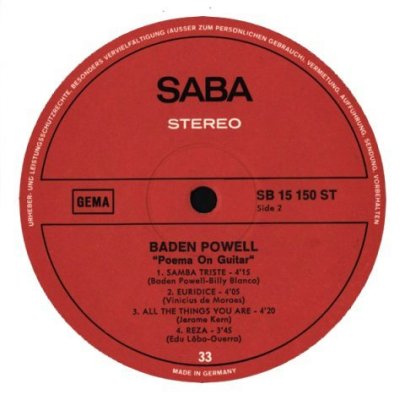 An excellent Brazilian guitarist, Baden Powell has played with his share of American jazz greats (including Herbie Mann and the late Stan Getz). But there’s no jazz to be found on Seresta Brasiliera, which was recorded for the Brazilian Caju Music label in 1988 and released in the U.S. on Milestone/Fantasy in 1994.

The title Seresta Brasiliera translates to “Brazilian serenade,” and an unaccompanied Powell embraces the Brazilian serenade style on personal, introspective versions of Pixinguinha’s “Rosa,” as well as songs he wrote with his frequent partner, the late Vinicius De Moraes (including “Velho Amigo,” “Cancao Do Amor Ausente” and “Serenata Do Adeus”).

A melancholy mood defines much of the CD, and Powell’s playing is often as beautiful as it is sad and remorseful. Seresta Brasiliera is an album with little optimism and plenty of soul. (by Alex Henderson)

Baden Powell is a Brazilian musician with a solid international reputation. A gifted instrumentalist and composer, he bridges the gap between classical artistry and popular warmth and was a key figure in the bossa nova movement. Born in the Varre e Sai district, he was baptized after his grandfather, a musician and conductor himself, whose father was an admirer of the Boy Scouts founder. When he was four months old, his family moved to the hill of São Cristóvão in the city of Rio. His father, the violonista Lino de Aquino, promoted regular get-togethers (rodas) of chorões at his home, at which famous names of Rio’s music used to play, such as Pixinguinha, his brother China, the sambista Donga, and so many others. At eight, his father took him to Rádio Nacional where Powell met Meira (Jaime Florence), a famous violonista at the time a member of Benedicto Lacerda’s regional. Powell would study violão with him for five years. Through Meira, a broad-minded musician, he discovered classics such as Segovia and Tarrega, along with Brazilian masters such as Garoto and Dilermando Reis. At nine, he presented himself at Renato Murce’s show Papel Carbono on Rádio Nacional, winning first place as a guitar soloist. At 13, he used to run from school, earning his first cachets at the neighborhood parties. After finishing high school, he joined the cast of Rádio Nacional as an accompanist. In that time, he traveled through Brazil with the radio’s singers. In 1955, he joined Ed Lincoln’s trio, playing jazz at the Plaza nightclub. The place was a focal point for musicians, journalists, and aficionados interested in jazz. It should be regarded as the second place where bossa nova was being generated (the first being Cantina do César, after Johnny Alf’s first appearances), contrary to the common notion of bossa being born at Zona Sul (South side’s) apartments. At that time, Powell began to compose “Deve Ser Amor,” “Encontro Com a Saudade,” “Não é Bem Assim,” and his first big hit, 1956’s “Samba Triste,” with lyrics by Billy Blanco and which would be recorded by Lúcio Alves in 1960.

In 1962, he met his future partner, Vinícius de Moraes, a composer, poet, singer, and diplomat. Their first song was “Canção de Ninar Meu Bem,” a great success from the beginning. Following that, they came up with “Samba em Prelúdio” (recorded still in 1962 by Geraldo Vandré/Ana Lúcia), “Consolação” (recorded by Nara Leão), “Samba da Bênção,” “Tem Dó,” “Só por Amor,” “Bom Dia, Amigo,” “Labareda,” and “Samba do Astronauta” (recorded by Powell in 1964). At this point, Powell was already a renowned musician and composer, with good connections on the artistic scene and wide exposure in the media. In that year, he accompanied Sílvia Telles at her famous show at the Jirau nightclub. In 1963, he recorded his first LP, Um Violão na Madrugada (Philips). In that year, he traveled to Paris where he presented himself at the Olympia theater with great success, using a repertoire of classical music and his own compositions. He also played regularly in a season at the Bilboquet nightclub and composed the soundtrack to the movie Le Grabuje.(by Alvaro Neder)

This first record for Barclay in 1964 is one of Baden´s most famous records in Europe, even the sound of the original record was never the best.

“Brazilian music is, as its country which is 16 times as big as France, diverse, varied, surprising, subtle and simple all at the same time. This music only asks, as Brazil, for regognition and love. With this album, which is the first he releases in Europe, the guitarist & composer BP presents us a complete palette of his musical world. From African rythms to his personal perceiving of classical european composers, and through delicate reminiscence of melodies from the Antilles, to negro american jazz accents: BP reminds all these influences on his guitar.

He’s 27 years old. Born in Rio. He played since 8 y.o. After having studied in Rio academy, where he improved his style and learned composition, he started like many other, in clubs with little rythmic entities. He eventually showed up in several Tv & radio broadcasts, and his compositions became very popular. He teamed with Tom Jobim, Carlos Lyra, Roberto Menescal for work and tours in several big cities in Brazil. He recorded with Herbie Mann and Jimmy Pratt just before his departure to the US. After some concerts in the Village Vanguard, his friend and poet Vinicius de Moraes made him come to Paris in the late of 63. He gave recitals and tv shows: Living room, musicorama etc… Asked for his guitaristic influences he answers: Segovia, Van Eps, Django are people that are part of the musical world i love. With this record you’ll be able to discover samples from this musical universe.

Here are the themes: DEVE SER AMOR: was recorded using play back device. Baden first recorded the rythmic part with the bass & drums. Afterwards he recorded the melody. The same process was involved with BACHIANA.
CHORO PARA METRONOME is quite a challenge. The choro which was originally an improvisation over folkoric patterns, turns here into a guitar piece. The metronome replaces the whole rythm section. Fitting perfectly with this souless rythm, BP shows here its astounding technique.

The Albinoni ADAGIO and the Bach PRELUDE so seduced the guitarist, that he did want to give a respectful homage to these composers by playing these two pieces.
BERIMBAU is the name of a musical instrument looking like an arc, which is used in the Capoeira. This is a dance which partly look like wrestle, and is done by Nordeste youth, especially in the Bahia area. It is undoubtly of African inspiration.

SAMBA EM PRELUDIO is made of two distincts melodies. Baden plays the first which is in turn played by the orchestra. Then the guitar plays the second theme, and then the two parts are played together, and taken by cello and Francoise Waleh’s voice. CHANSON D’HIVER is the first song that Baden wrote when he came to Paris in December 63.

SAMBA TRISTE opens on a very dark climate and dramatic first part, then the repetitive rythm takes over and leads to the conclusive chords. BERCEUSE A JUSSARA is a delicate composition, dedicated to his little niece “Sobrinha” Jussara. EURIDICE is a Vinicius de Moraes composition, which illustrates the Orphee myth. BACHIANA is a piece written with, once again, Johann S. Bach in mind. GAROTA is a new composition from Tom Jobim and Vinicius. Baden takes it as a basis for a free improvisation, with a complete command on the instrument”  (original liner notes by Jacques Lubin)

My copy is a rare German pressing (released in 1966 – with liner notes written in German …. )