This wonderful set of live recordings may have a few flaws audio-wise here and there, but there’s something in the excitement of the proceedings captured here that nullifies all of that. For sheer class, it’s hard to beat Irma Thomas’ or Allen Toussaint’s turns with the crowd, just as it’s impossible to ignore the loose and jagged performances of legends like Lightnin’ Hopkins and Professor Longhair, perhaps the centerpieces of this unheralded work of genius. The real thing in front of the hometown crowd, this is one modern-day live album with some spirit to it. (by Cub Koda)

Once a year, during the New Orleans Jazz & Heritage Festival, some of the greatest artists the Crescent City has to offer get together to revel in their colourful past and give fans a sample of what’s in store for the future. The 1976 Jazz & Heritage Festival was no exception to this tradition. The music contained within is not only indicative of the time it was recorded but also transcends time by affecting the popular music being produced today by bands like Galactic.

Most of the tracks on this album were recorded on April 9, 10, and 11 at the R&B segment of the festival. The album contains performances by jazz progenitors and New Orleans greats such as, Professor (‘Fess) Longhair, Allen Toussaint, Irma Thomas, Lee Dorsey, Ernie K-Doe, Robert Parker, Earl King, and Lightnin’ Hopkins.

This is some of the most heartfelt and feel-good music I’ve heard in a while and it’s bound to make you feel the same way. (onepointeightseconds.blogspot) 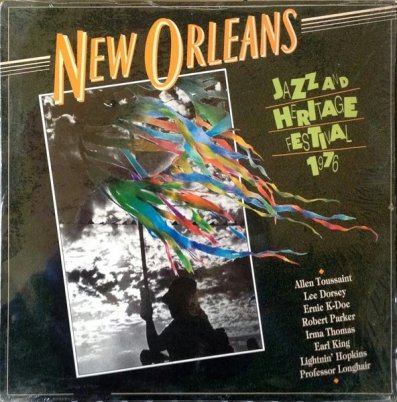 In 1989 this album was re-rleased by Rhino Records with a complete different cover and artwork. 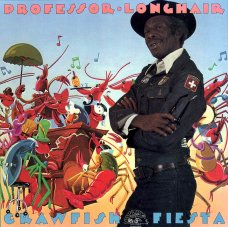 Almost any Professor Longhair album is worth owning. It’s just that some albums are worth owning more than others This (along with “The Complete London Concert”) is one of them.

This was the ‘Fess’s last recording – he died shortly after it was recorded and I’m not sure whether he actually saw the release of this album. If you want to leave the world with something to remember you by, even with the vaulted heights of the ‘Fess – this album is as good as you can get.

“Big Chief” – one of my favorite tunes of the ‘Fess – written by Earl King – the original has a massive horn section that made the ‘Fess jump out of his skinny skin. Here the tune always sounded “fast” to me – but as the opening number to this CD it is just “perfect”.

“Something On Your Mind” – a great heartfelt rendition – originally recorded in 1963 as a Watch single – I much prefer this arrangement.

“You’re Driving Me Crazy” – full of the ‘Fess’s vocal off-kilterness. I’m sure that this was a tune he used to call “No Buts, No May Bes” again I like this arrangement and ‘Fess’s vocals and piano playing here over the classic.

“Red Beans” – oh yes! Worth it for the price of admission – just listen to this track to be sold (down the river as a slave to his music forever). I’m not sure if there was a previous version by the ‘Fess.

You know, I really shouldn’t have to review much more to tell you that this is some “more than equal” album – … Go listen to “Whole Lotta Love” (track 11)’s vocals to understand why – the ‘Fess was and still is a national treasure. You really should have this, along with the Complete London Concert, in your collection. Vincent Tseng

“Professor Longhair put “funk” into music; he’s the father of the stuff.”–Dr. John

“He’s the Bach of rock.”–Allen Toussaint

“He’s a seminal force, a guru, and original creator of the New Orleans piano style…the teacher of great players like Fats Domino, Allen Toussaint, Mac Rebennack, James Booker and Huey Smith.  All acknowledge him as The Great Master.”–Jerry Wexler