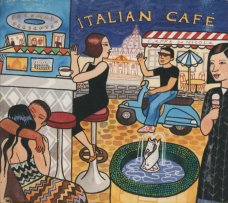 Putumayo World Music is a New York City-based record label, now specializing in compilations of music from various nations, regions, or musical styles which may be classified as world music.

In 1991, on his way home from Bali, Dan Storper stopped in San Francisco, California. In Golden Gate Park, he heard the Nigerian band Kotoja. He was impressed by the music and the way it gathered many different people. He made a compilation of music he had gathered on his journeys and gathered a positive response. This led him to give out his first release in 1993. Storper took the name of his record label, Putumayo, from Colombia’s Putumayo Department where he travelled in 1974, which subsequently came from the name of Putumayo River. The word is said to be the name of a bird (heron).

Every release features the art of Nicola Heindl. Her art is both folky and modern, and, according to the Putumayo website, “represents one of Putumayo’s goals: to connect the traditional to the contemporary.”

The Putumayo Kids division was created in 2002. Since the release of the World Playground CD in 1999, Putumayo Kids has achieved honors from Parents’ Choice Awards and the National Parenting Publications Association, and has grown to be one of the more important children’s record labels.

Putumayo has ten offices worldwide. Their products are sold at a network of more than 3,000 book, gift, clothing, coffee and other specialty retailers in the US. The label claims to distribute their CDs in more than 80 countries around the world. (by wikipedia)

This is a charming, if ultimately fairly inconsequential, collection of recordings from 1950s and 1960s Italy, along with a handful of songs by a few modern artists whose stylistic roots go back to the postwar era as well. The overall sound may come across as a bit kitschy to American ears — there are lots of accordions and crooning, emotive vocals — but if you spend some time with these recordings most of them will grow on you. Highlights include the quirky Vinicio Capossela’s “Che Cossè l’Amor,” Quadro Nuevo’s jazzy instrumental “Tu Vuo’ Fa’ l’Americano,” and Quartetto Cetra’s slightly cute but really very engaging “Un Bacio a Mezzanotte.” On the slightly less compelling side are Gianmaria Testa’s contributions, the willfully goofy “Dentro al Cinema” and the self-consciously intense (and ultimately self-parodying) “La Traiettorie delle Mongolfiere,” but the high points outweigh the low ones on this ultimately charming collection. Recommended. (by Rick Anderson) 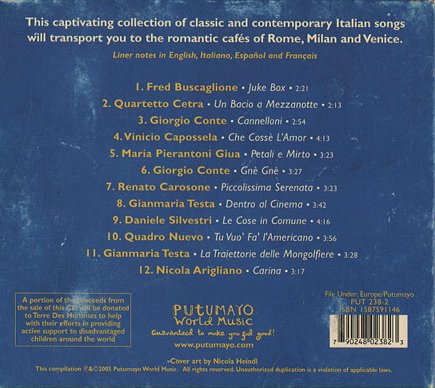 This review is not correct: Most of the recordings are NOT from the 50´s, … and in the reat booklet you can read, that Quadro Nuevo are from Austria … this is wrong .. Quadro Nueva are from Bavaria (Southern Germany) … but … much more important …

… more recordings from this great label will come ! 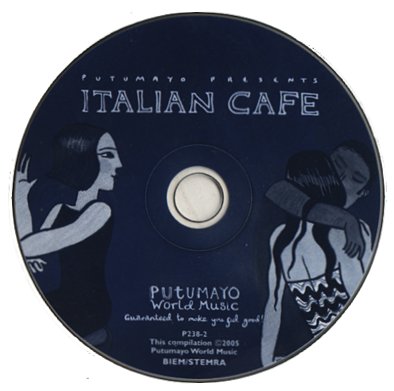 The group Quadro Nuevo was born on a grey January day in 1996 when four young musicians met for the first time on a parking lot near Salzburg.

The four, who had only vaguely heard of each other before then, had been commissioned to produce a movie score for the Austrian TV station ORF. The fee for the recording was subsequently blown in the local Casino and the film was never broadcast.

But on that day, one thing was clear: a new quartet with an unmistakable sound had been born. From now on, there would only be Quadro Nuevo, the love of nostalgic acoustic music, traveling together evening after evening, from stage to stage.  A dream became reality, the joyous exuberance audible in every note. 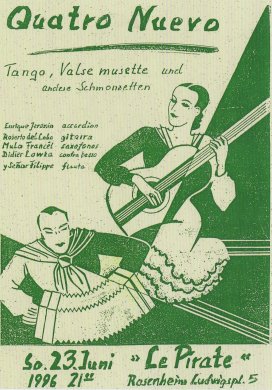 The quartet has now performed at many renowned festivals such as the Montreal Jazz Festival, the International Burghausen Jazz Weeks, the Rheingau Music Festival, Merano Music Weeks, Saalfelden Jazz Days, the Ollinkan Festival in Mexico City and the Quebec Festival.

Quadro Nuevo is Europe’s answer to the Argentine tango.  Arabesques, Balkan swing, ballads, daredevil improvisations, the melodies of old Europe and the lightness of the Mediterranean merge into fabulous songs full of joyous colour.

These melodies tell of the vagabond life, of experiences and encounters on this great journey of life, of small coincidences and grand moments, of tenderness and wild temperament driven between the winds of east and west, caught between consuming yearning and joyful fulfillment – between the bitter and the sweet.

Quadro Nuevo has been touring the globe since 1996 giving over 3000 concerts in places as far flung as Sidney, Montreal, Ottawa, Kuala Lumpur, Istanbul, New York, New Orleans, Mexico City, Peking, Seoul, Singapore, Tunis and Tel Aviv. From the tranquility of Upper Bavaria, the road has led them over the Alps to Porto, traversing Europe from Denmark to the Balkans and to the Ukraine.

In the course of their travels, the quartet has established its own form of melodic poetry beyond all genre pigeon holes, unmistakably shaped by the passionate love of their instruments and the joy of making music. The secret is their devotion: it is a rare experience to hear music performed with so much excitement, verve and an empathy with cultures that are foreign.

The Quartet’s venues are as diverse as the roots of their music and are not limited to concert halls and festivals. Quadro Nuevo’s ardent virtuosi are just as much at home busking on the piazzas of southern Europe, enticing audiences to dance to their music as a night-time tango band, as they are in jazz clubs and locations as famous as New York’s Carnegie Hall.

Quadro Nuevo’s CD’s have received the German Jazz Award, climbed into the Top Ten of the Jazz and World Music charts and were awarded the coveted European Phono Award in Paris.

And this is their 4th album … another highlight in the history of Quadro Nuevo:

“Canzone della Strada'” Quadro Nuevo explores old Italian tango and lyrical canciones.
Music of an Italy almost lost in time, once so enchantingly presented by long forgotten singers of the likes of Carlo Buti, Nilla Pizzi, and Claudio Villa. Visions of the South, firing the melancholic fantasy yearning in North and Central Europeans since time immemorial, are awoken by their songs.
These take their place next to temperamental Neapolitan street hits and daring improvisations.
Quadro Nuevo drew its ideas and inspiration from long trips through Italy.
Musical jewels pickup up from the streets and squares of Mediterranean towns.

The CD released in 2002 Quadro Nuevo : Canzone della Strada records this musical dream. It was distinguished with the German Jazz Award and the Impala European Phono Award and climbed into the Top Ten of the Jazz and World Music Charts. 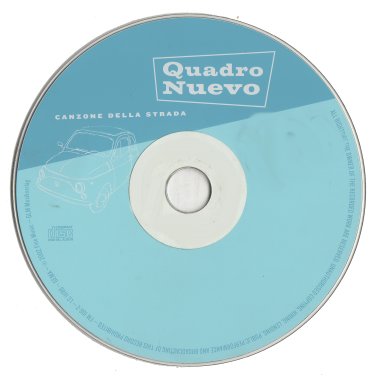