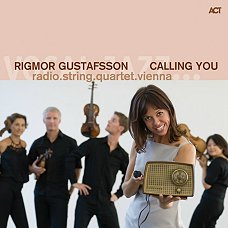 At first sight this collaboration between two of ACT’s established artists seems an unlikely alliance.
Swedish singer Gustafsson has released a series of albums for the label, all the titles ending with the word “You” so in effect I guess this is her record. Gustafsson is an assured and soulful singer schooled in jazz but with an innate feel for the rhythms of popular song ( her album “Close To You” is a celebration of the music of Dionne Warwick). She is also a more than useful songwriter and wrote the bulk of the material on her 2007 release “Alone With You.”

radio.string.quartet.vienna won great critical acclaim when they first burst onto the scene in 2007 with their album “Celebrating The Mahavishnu Orchestra”. Their ingenious arrangements of the music of John McLaughlin proved remarkably successful both artistically and commercially and in 2008 the group released their second album “Radiotree”, a collaboration with Austrian accordionist and bandoneon player Klaus Paier. This time the focus was largely on original material composed either by Paier or by members of the quartet.

On “Calling You” the material is a mix of inspired covers from both the jazz and pop songbooks plus a smattering of original material from both Gustafsson and members of the quartet. The quartet’s line up remains unchanged with Johannes Dickbauer and leader Bernie Mallinger on violins, Cynthia Liao on viola and the extraordinary Asja Valcic on cello. RSQV break pretty much all the rules for a string quartet, playing pizzicato almost as much as arco and generating an incredible rhythmic drive, much of this due to Valcic in the proverbial engine room. The level of technical skill displayed by the players is astonishing and their arrangements, shared between Mallinger and Dickbauer, are always adventurous and colourful. No wonder the press release states that the group have “totally redefined the string quartet genre”. What is amazing is the ease with which the quartet dovetail with the voice of Gustafsson to produce something unique. It all sounds perfectly natural and what might have been a musical disaster area is, in fact, a huge success.

The ensemble commence with a wistful,slowed down version of Paul Simon’s “Still Crazy After All These Years”. The quartet complement Gustafsson’s voice superbly and shine in a spectral instrumental middle passage. The imaginative arrangement and Gustafsson’s delivery bring out the pathos in Simon’s lyrics. It’s a stunning version of the song.

RSQV know how to have fun as well as how to emote. The jazz standard “Makin’ Whoopee”, a tune Gustafsson has covered previously, gets the playful treatment complete with buzzing strings and scat vocals.

Gustafsson’s own “Goodbye For Now” could be a jazz standard and features the singer at her most flirtatious. There’s even the sound of whistling (Gustafsson presumably) over the sound of massed pizzicato strings. 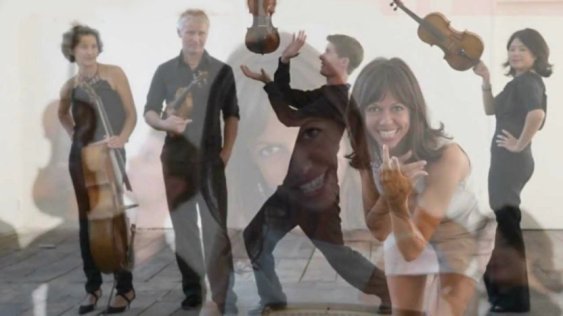 It’s back to the serious approach for Burt Bacharach and Hal David’s “I Don’t Know What To Do With Myself”. Gustafsson’s yearning vocal brings out the sense of loneliness expressed in the lyrics.
The brooding string arrangement complements her perfectly and in it’s way this is just as radical an interpretation of the tune as that of the White Stripes.

By way of contrast Valcic’s “Fancy Nancy” is a joyous romp with Gustafsson camping it up above furiously sawing strings. It’s a bit throwaway but great fun.

The ensemble like to mix moods and styles and no two tunes follow the same pattern. Their version of Stevie Wonder’s “If It’s Magic” is achingly beautiful, Gustafsson’s pure vocal augmented by an unusually “straight” string arrangement. Immediately afterwards Richard Bona and John Legend’s “Please Don’t Stop” marks a return to the playful, flirtatious approach complete with finger snaps.

Gustafsson’s album notes state that the group merely picked songs that meant a lot to them regardless of genre and classification. However they do seem to have a particular affinity for the works of Bacharach and David. A remarkable reworking of “Close To You” imbues the song with an ethereal sense of wonder, it’s fragile and vaguely Bjork-ish in spirit if not in delivery.

Johannes Dickbauer’s writing contribution is the haunting “Wherever We Go” beautifully delivered by Gustafsson above Dickbauer’s own arrangement.

Joni Mitchell’s “The Dry Cleaner From Des Moines” with music by Charles Mingus is an altogether more challenging piece of work. Gustafsson’s virtuoso vocal performance and Mallinger’s grainy, sometimes dissonant arrangement are hugely effective on the album’s most extreme piece of work.

Bob Telson’s much covered title track from the 1987 movie “Bagdad Cafe” also works supremely well. Gustafsson’s singing and Mallinger’s arrangement conjure up the emptiness of the desert highways referenced in the song’s lyrics. I’m not familiar with the other covers by the likes of Celine Dion and George Michael but I’d imagine they pale in comparison to this.

“Nothing’s Better Than Love” is Gustafsson’s second writing credit. She deploys semi spoken hipster vocals and the playing by the quartet is typically sparky but it’s not one of the record’s most memorable cuts.

Given that the bulk of the songs covered on the album are the work of Americans Gustafsson redresses the balance with the closing item, a beautiful rendition of the traditional Swedish folk tune “Ack Varmland Du Skona”. Gustafsson sings in her native tongue, it’s a nice touch from a vocalist who has made herself so much at home in the American idiom.

When RSQV took their Mahavishnu project on the road they won fulsome praise for the quality of their live performances. Together with Gustafsson they are currently touring the music of “Calling You” around Europe and it’s likely that further plaudits will be forthcoming. Listening to the album it’s apparent that this combination of voice and instruments should make for a hugely impressive live show.

The album itself is a highly impressive piece of work and as I’ve intimated it should work very well live. Whether it’s the kind of album that will remain a regular favourite after the initial sense of admiration/novelty has worn off I’m not yet certain but there’s no doubt that the singing and playing is of the highest order. (by Ian Mann) 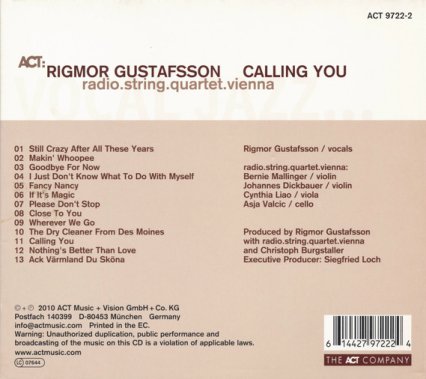 Some Informations about the legendary ACT Label from Germany:

“After nearly twenty years as a top executive for Warner International, I finally decided to realise my biggest ambition of all – to form my own record company recording the kind of music I loved – jazz!” With this statement, Siggi Loch ended his high-flying career as an executive within the international music business, and started again as boss of an independent record label. At the age of fifty it was a major mid-life career change, but with the launch of the ACT label it was the realisation of a dream that had taken him into the music business in the first place.

The establishment of ACT took place at a time when the internet was beginning to take-off. In the subsequent decades the international music business would be eroded by CD burning and later illegal downloading, and the market would shrink by half. In contrast to this trend, ACT has become one the most ”most critically acclaimed and internationally respected independents of the current era“ (Jazzwise).

More than twenty years later, the project that started in 1992 is a huge success story: “Music for people with open ears and an open mind,” says Siggi Loch and with this guiding principle in place, he set off on his chosen path. The beginning was a truly an adventure, as working with innovative and unconventional music is always a challenge and of course a big financial risk. But it is only when artists and listeners are open to new sounds that ‘magic moments’ are born, of which there are many in the twenty years of ACT history with artists like Nguyên Lê, Esbjörn Svensson, Nils Landgren, Michael Wollny, Viktoria Tolstoy, Lars Danielsson, Wolfgang Haffner and Youn Sun Nah inspiring and changing the music world. Twenty years of magic musical moments across more than 350 releases. Twenty years in which European jazz became a major force in the world of music, with the ACT label playing a major part in this process. And twenty years in which ACT also became one of the most popular European jazz labels, which the people’s choice award for Jazz Label Of The Year at the German ECHO Award in 2010, 2011, 2012 and 2013 proves. (Sigi Loch, ACT Records)

The 6. edition of the popular Magic Moments series by Germany’s jazz label of the year 2010-2012 (ECHO award). In 2013 again under the motto “In the Spirit of Jazz”:Music far from fixed styles. Sometimes more, sometimes less jazzy. Between the genres, whether classical music, rock or pop. On the pulse of time and beyond. With established ACT stars and promising newcomers. Music for open ears, for the mind and soul. And for everyone who loves good music. 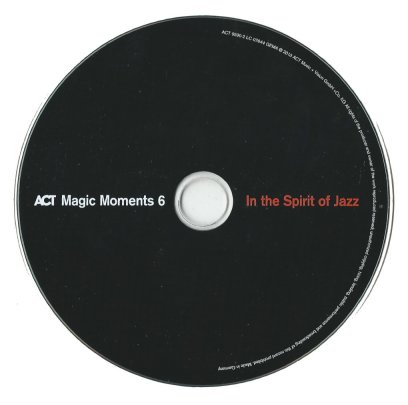