Mariano was born in Boston, Massachusetts, United States, the son of Italian immigrants, John (Giovanni) Mariano and Mary (Maria) Di Gironimo of Fallo, Italy. He grew up in the Hyde Park neighborhood of Boston, enlisting in the Army Air Corps after high school, during World War II. After his service in the Army, Mariano attended what was then known as Schillinger House of Music, now Berklee College of Music. He was among the faculty at Berklee from 1965 to 1971. Mariano moved to Europe in 1971, settling eventually in Köln (Cologne), Germany, with his third wife, the painter Dorothee Zippel Mariano.

He played with one of the Stan Kenton big bands, Toshiko Akiyoshi (his then wife), Charles Mingus, Eberhard Weber, the United Jazz and Rock Ensemble, Embryo and numerous other notable bands and musicians.

He was known for his use of the nadaswaram, a classical wind instrument from Tamil Nadu.

Mariano had six daughters, including four with his first wife, Glenna Gregory Mariano: Sherry, Cynthia, Melanie, and Celeste, and was step-father to Glenna’s son, Paris Mariano. Mariano is father to musician Monday Michiru with his second wife, Toshiko Akiyoshi. He had his youngest daughter, Zana Mariano, with partner, Charlotte Bulathsinghla. Mariano had six grandchildren and two great-granddaughters. Mariano died of cancer on June 16, 2009, at the age of 85. (wikipedia)

R. A. Ramamani (* c. 1956) is an Indian singer, composer and teacher.
Table of Contentsni studied music at Bangalore University (Master 1977). She is a virtuoso of classical Carnatic music, which is cultivated in South India. In 1978, together with her husband, percussionist T. A. S. Mani, Ramesh Shotham and jazz pianist Louis Banks, she founded the Indo-Jazz combo Sangam, which later became her band Jazz Yatra. She toured Europe with the Dissidents and the Karnataka College of Percussion in 1980. In 1983 she performed at the Berlin Jazz Festival together with saxophonist Charlie Mariano. In the same year ECM released the joint album Jyothi.

Mike Herting organised a first meeting of Ramamani, the percussionists and the WDR Big Band Cologne in 2000, which was documented on CD (Sketches of Bangalore). She toured Europe with Lennart Åberg and Oriental Wind in 1987. Ramamani then formed the ensemble KCP 5 with Herting, Mariano, T. A. S. Mani and Ramesh Shotham, which also performed at the Moers Festival in 1999 and the Leverkusener Jazztage in 2003. She has also recorded with Okay Temiz and with David Rothenberg. At the RuhrTriennale she was a guest with Century of Song in 2007.

Ramamani co-directs the Karnataka College of Percussion with T. A. S. Mani and also teaches at other institutions such as the Choreographic Institute in Bangalore. (wikipedia)

Karnataka College Of Percussion
A percussion academy from Bangalore, in the Indian province of Karnataka. The touring music project was directed by T. A. S. Mani, and was originally documented as a large ensemble, later more often as a duo or trio, with Ramesh Shotham, and also usually featuring vocal soloist Smt. R. A. Ramamani. (discogs.com) 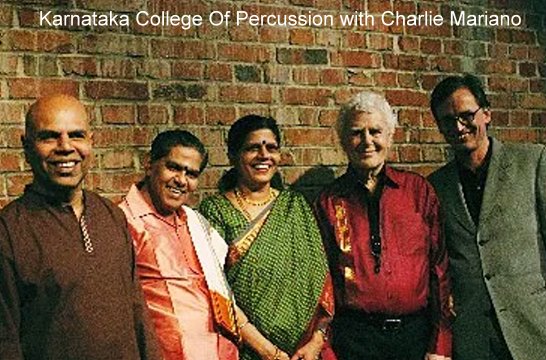 And here´s a real thrilling alum:

Since 1964 the Karnataka College of Percussion has been committed to its mission of expanding awareness of Indian Classical (especially Carnatic) music. Part of this outreach has involved a number of jazz-oriented and fusion projects through which the institution has spread its affirmative message. Thus do we come to this intriguing, if seemingly forgotten, collaboration with American saxophonist Charlie Mariano, who left us in 2009 at the age of 86. The result is a fluid and respectable blend of cultural signatures that transcends any ties to genre in favor of a purely emotive experience. The voice of R. A. Ramamani figures prominently, as in the ruminative opening track, titled simply “Voice Solo.” She traces long stretches of landscape, one hill at a time, where the dry rolling plains offer up their secrets for the reward of rain. Her prayers are bifurcated through overdubbing, lending both a smile and a promise to the title.

In this diffusely lit portal we find only further portals. In “Vandanam” we are regaled with tales of old by Mariano’s rolling flute, gilded by the pleasant jangle of the kanjira and mridangam. Ramamani’s ululations walk hand in hand with flute for a unified sound. “Varshini” and “Saptarshi” are smooth and graceful spaces in which voice is both cause and effect. Mariano’s soprano is a voice in and of itself, caught in flurries of percussion and passionate resolutions. These lively stops give way to the interweaving lines of reed and voice in “Kartik,” which closes on some transportive drumming from T. A. S. Mani on mridangam. Lastly is “Bhajan,” featuring doubled voice and a palpable communication with the beyond. As the drums anchor us, so too do they spring forth to those less definable stretches of land, where only the human voice can wander in its ephemeral laudation, threaded by the twang of the morsing (Indian jaw harp) and dancing a slow and careful surrender.

Without neither pretension nor ulterior motive, Jyothi is a delicacy in the ECM catalogue and a careful coming together of thought and performance to be taken as it comes…and goes.