John Renton was a singer and multi-instrumentalist (guitar, keyboards, harmonica, etc.). Born in India, lived for a shirt time in England and then moved to Vancouver, Canada where he first worked as session musician in the 1960s.

During the Sixties he played in locals bands like
The Raja and Three To One before he tried to start a shortlived solo career.

And this album is a pretty good one … a great mixture between Folk-Rock with some Psych elements (“Picture Tree”, “Monday Morning”).

Unfortunately I gave no idea what was happened with John Renton after recording this beautiful album.

A forgotten treasure ot the Seventies (including a great cover) !

This first and last solo album of this Canadian musician, released by the label “Reprise Records”, was not reprinted on the CD …

So you hear another vinyl rip by myself.

Frontcover of the test pressing 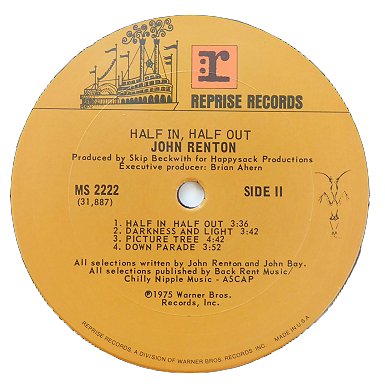