Chicago saxophone icon Fred Anderson died in 2010 and since then his birthday has been celebrated by friends, admirers and colleagues. For the 2015 event saxophonist/composer Roscoe Mitchell assembled a quartet for a tribute. The quartet is completed by cellist Tomeka Reid, bassist Junius Paul and drummer Vincent Davis. Mitchell prepared four original pieces and adaptations of two Fred Anderson compositions, Bernice and Ladies in Love. The concert was presented at Constellation in Chicago on March 27, 2015.

This concert, recorded live this year at a Chicago club, celebrates the 2010 death of Chicago saxophonist Fred Anderson. Unlike colleagues in the Chicago-based Association for the Advancement of Creative Musicians (AACM), Anderson stayed close to home most of the time through his productive life, owned, operating and playing in the Velvet Lounge. At different times, his combo included AACM luminaries like trombonist George Lewis and demon drummer Hamid Drake. Every year since his death, his musical soul mates celebrate his legacy with a concert like this.

If anyone qualifies for this gig, it’s brilliant reed player group leader and composer Roscoe Mitchell, who is to jazz music what the Hungarian composer Gyorgi Ligeti (d. 2006) was to ‘classical’ music, an artist of resolutely modernist bent who has always quested for new ways to express himself. This new album is one of Mitchell’s more adventuresome outings.

Thus, for the jazz novice, it is also one of his less accessible. It’s good, as almost anything Mitchell does is good. But it’s not easy to get into unless you’re already used to Mitchell’s innovations, which include the use of tone rows (Mitchell’s theme statement on “Cermak Road,” the final cut on the album, could have been written by Webern or Berg, except for the churning turmoil of rhythm underpinning it) and long passages of non-stop sax playing made possible by circular breathing. Mitchell’s associates on the album include Vincent Davis, a fiery drummer who has played with him fro a while, and newcomers Tomeka Reid on cello and Junius Paul on bass. Reid and Paul play their instruments with equal facility bowed and plucked. One of Mitchell’s compositions, “The Velvet Lounge,” is an extended solo outing for cellist Reid, playing arco: drummer Davis joins her halfway through and Paul on bass helps them wrap the piece up. Of the six songs, two are by Anderson, the other four Mitchell’s. 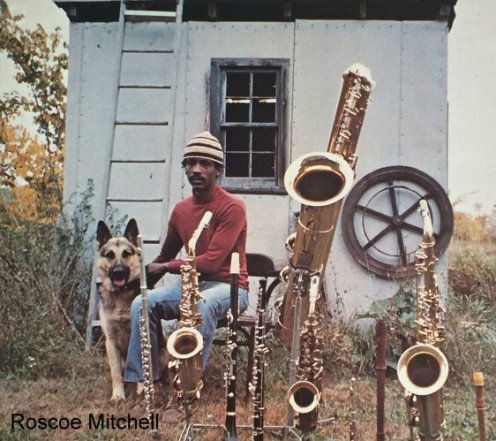 Some of Mitchell’s playing on this lively album clearly qualifies as jazz, though of a distinctly modern persuasion, but all of it falls under the Mitchell’s Art Ensemble of Chicago used to categorize its music: this is “Great Black Music.” If you’re not used to Mitchell’s playing, it may take you a while to tune into this music but it’s the real thing. As is Mitchell, one of the most innovative, exciting –and best– musicians still performing. (And he’s 75!) —David Keymer)

Attention please: This is Free Jazz !