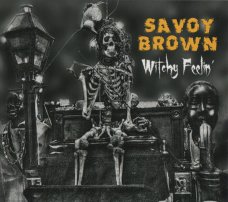 Kim Simmonds founded Savoy Brown in October 1965. At 69 he still is Savoy Brown as the band is pretty much Kim Simmonds on guitar and vocals and whoever he has a back-line. Here we have him with Pat DeSalvo on bass and Garnet Grimm on drums doing a great job backing up this 69 year old British master of the blues guitar.

“Why Did You Hoodoo Me” is a nice an above mid-tempo blues rocker where Simmonds demonstrates his prowess on guitar for us. He questions why he’s been cursed by his woman in this slick production. Kim switches things up with ”Livin’ On The Bayou” with a little creole inspired stuff. A Cajun ballad with some pretty and somewhat ethereal guitar. “I Can’t Stop the Blues” has Simmonds growling out the lyrics in a song about loneliness. The guitar work is what this one’s all about- steady handed and cool. The title cut is up next, a cool slow blues with nice guitar picking, and a ghostly bass line and sound. “Guitar Slinger” picks up the tempo a little and gets into what the title says- guitar slinging. “Vintage Man” shuffles and shines nicely as Kin sings about being a vintage sort of guy in Levis, blue suede shoes and listening to his record player as he listens to and plays Jimmy Reed.

The slide comes out for “Standing In A Doorway.” Slow blues with voice and slide in a melancholy repartee, nicely done. “Memphis Blues” gives us a driving beat and some big guitar and some more slide, but this time it’s greasy and slick. “Can’t Find Paradise” is a big, blues rock anthem sort of piece with some more slide work.

Simmonds guitar cries and wails in “Thunder, Lightning and Rain.” It’s a big cut with lots of guitar that goes on for nearly 8 minutes of 6 string soling to a steady bass and drum beat. The CD closes to “Close to Midnight,” a sultry and thoughtful instrumental of Simmonds showing us why he’s highly regard as a guitar man.

If you love Savoy Brown and Kim Simmonds then you’ll be spinning this CD a lot because this is right up your alley. Simmonds shows us he’s still got what it takes. The guitar is not overdone, but it’s big and impressively done. It’s a really enjoyable set of new songs all penned by Kim. (Steve Jones) 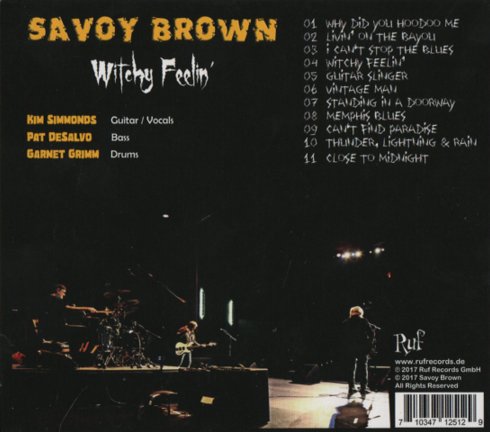 All songs written by Kim Simmonds 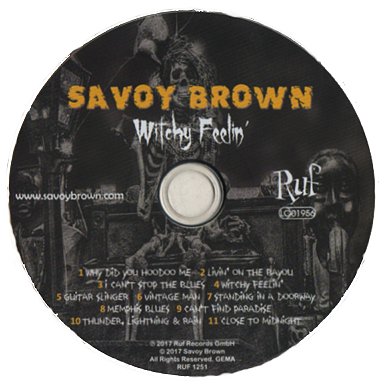 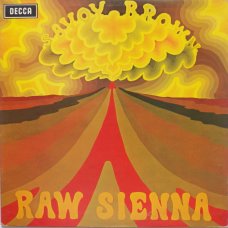 Raw Sienna is the fifth album by the band Savoy Brown.

It was recorded and released by Decca in the UK 1970 in both mono and stereo (LK/SKL 5043). For release in USA and Canada, tapes were leased to Parrot Records (London Records)—PAS 71036.

This high-water mark by the band finds them softening their rougher edges and stretching out into jazz territory, yet still retaining a blues foundation. There’s not a bad cut here, with enough variety (bottleneck slide, acoustic guitar, horns, and strings) to warrant frequent late-night listenings. “A Hard Way to Go,” “Needle and Spoon,” and “Stay While the Night Is Young” are especially strong, as are two instrumental numbers. Unfortunately, leader Kim Simmonds lost his greatest asset when vocalist Chris Youlden quit for an ill-fated solo career after this recording. Youlden had one of the most distinctive voices in British blues, and Savoy would never fully recover from his exit. (by Peter Kurtz) 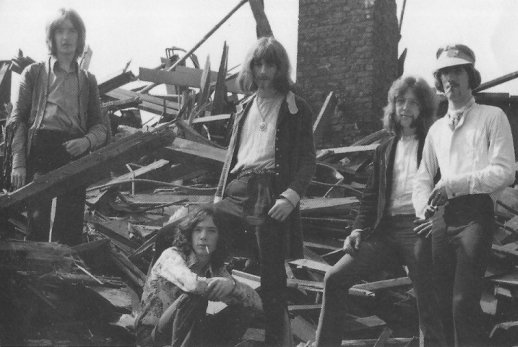 Here’s an excellent album of heavy piano and bass, some excellent Chicago brass which is for once not overused, and all merged into a good Kim Simmonds lead that can range around from Bike movie stuff to some verdant upper range fingering. It’s all woven around a hard, simple yet very together rhythmic frame — analytical verbiage for sounds which more than occasionally ignite to fuse into a genuinely new kind of sound that arises from its own synthesis. Terry Noonan’s arrangements for bass and string help unite what could have been very conflicting types of sound. Something of Mose Allison’s voice comes through. Remember Mose on “Needle and Spoon,” another anti-drug song? “I rise with the sun and sleep with the moon but I feel alright with my needle and spoon.” Never mind all that. The music is lots of fun by some people who deserve more recognition than they’ve received.(Jonathan Eisen, Circus, 7/70) 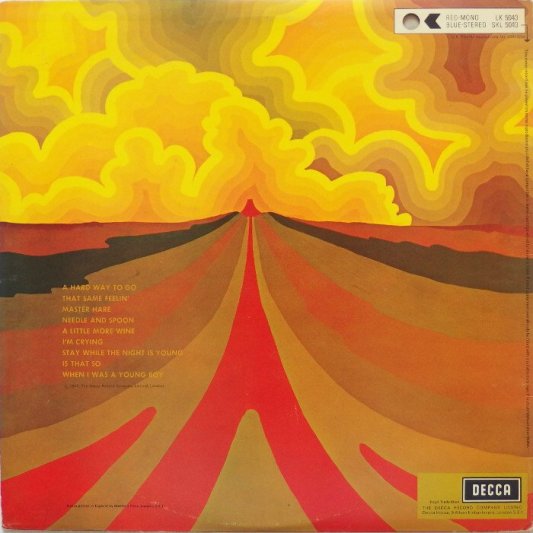 Rising from the depths of the underground to the thick of the chart races, Savoy Brown bids for the top of the charts with another hot album and featured single “A Hard Way to Go.” Chris Youlden is a superfine rock/blues singer, and co-writes the group’s subtle, penetrating material. Never better, the outfit scores throughout, especially on “While the Night is Young” and “Needle and Spoon.” (Billboard, 1970) 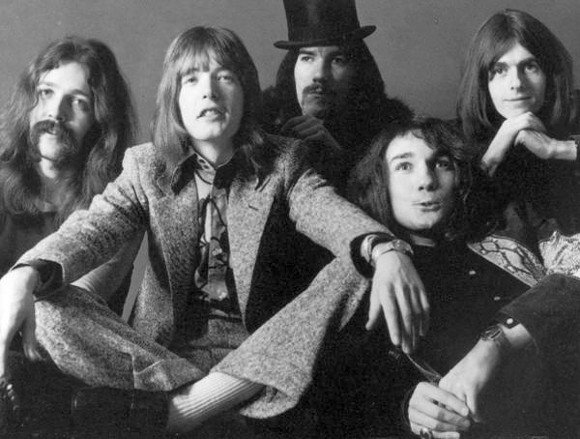 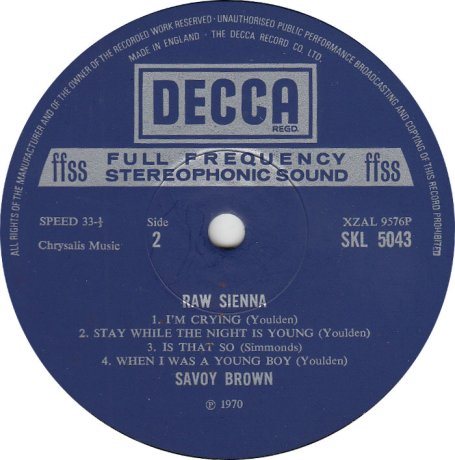 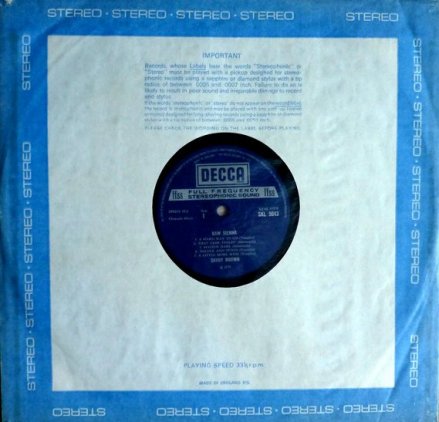 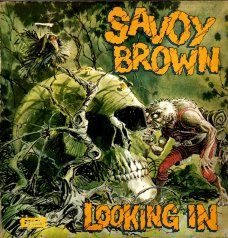 Looking In is the sixth album by the band Savoy Brown.

The album reached no. 50 in the UK. (by wikipedia)

Savoy Brown’s blues-rock sound takes on a much more defined feel on 1970’s Looking In and is one of this band’s best efforts. Kim Simmonds is utterly bewildering on guitar, while Lonesome Dave Peverett does a fine job taking over lead singing duties from Chris Youlden who left halfway through the year. But it’s the captivating arrangements and alluring ease of the music that makes this a superb listen. The pleading strain transformed through Simmonds’ guitar on “Money Can’t Save Your Soul” is mud-thick with raw blues, and the comfort of “Sunday Night” is extremely smooth and laid back. 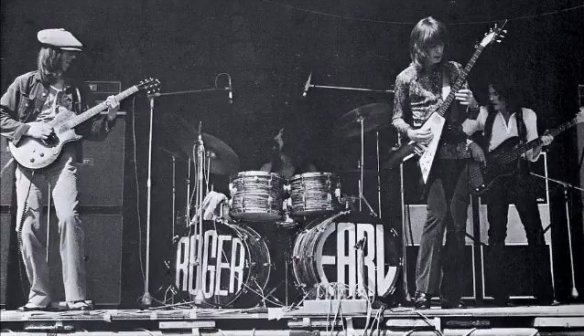 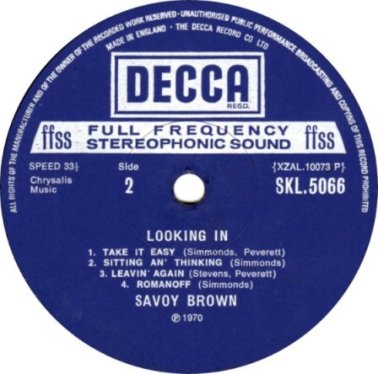 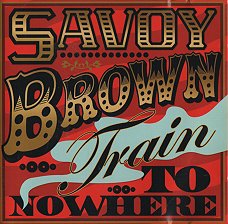 Formed in 1967 and anchored around guitarist Kim Simmonds, Savoy Brown’s U.K. take on boogie blues paved the way for the heavier breakthough of British blues-based bands like Cream and Led Zeppelin, and while Savoy Brown don’t have the same critical reputation as these, they were still a bread-and-butter little rocking band. (by Steve Leggett)

So sit back and enjoy the smooth blues that is Savoy Brown, one of the finest blues bands ever ! 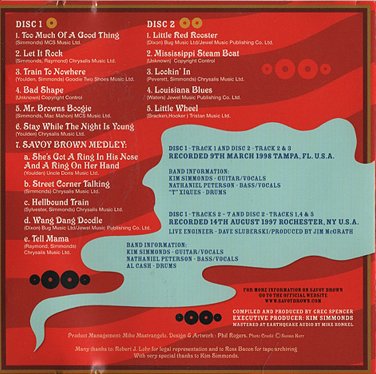 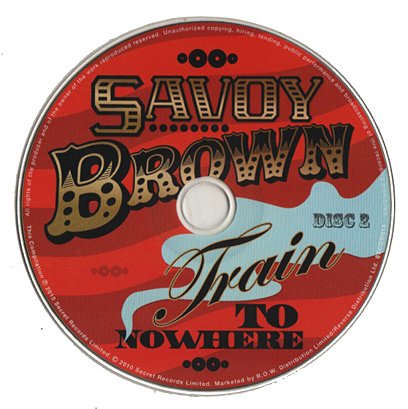 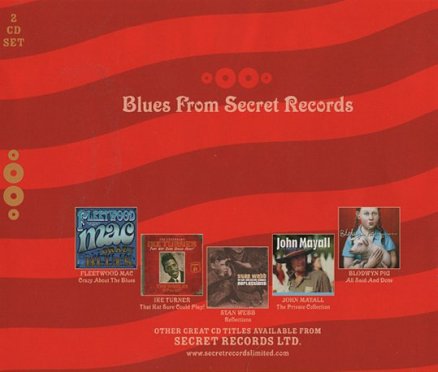 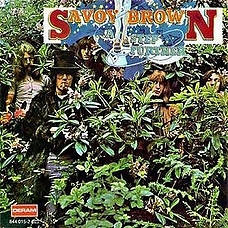 With Kim Simmonds and Chris Youlden combining their talents in Savoy Brown’s strongest configuration, 1969’s A Step Further kept the band in the blues-rock spotlight after the release of their successful Blue Matter album. While A Step Further may not be as strong as the band’s former release, all five tracks do a good job at maintaining their spirited blues shuffle.

Plenty of horn work snuggles up to Simmonds’ guitar playing and Youlden’s singing is especially hearty on “Made up My Mind” and “I’m Tired.” The first four tracks are bona fide Brown movers, but they can’t compete with the 20-plus minutes of “Savoy Brown Boogie,” one of the group’s best examples of their guitar playing prowess and a wonderful finale to the album.

This lineup saw the release of Raw Sienna before Lonesome Dave Peverett stepped up to the microphone for Looking In upon the departure of Youlden, but the new arrangement was short lived, as not long after three other members exited to form Foghat. As part of Savoy Brown’s Chris Youlden days,

A Step Further should be heard alongside Getting to the Point, Blue Matter, and Raw Sienna, as it’s an integral part of the band’s formative boogie blues years. (by Mike DeGange) 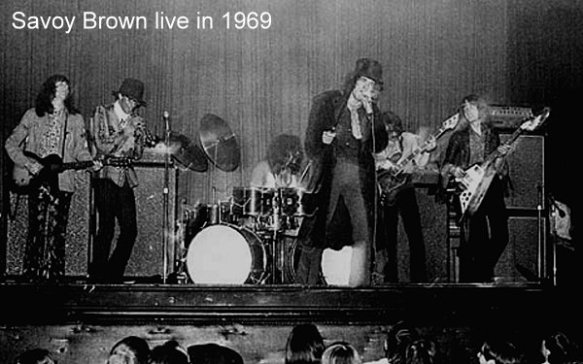 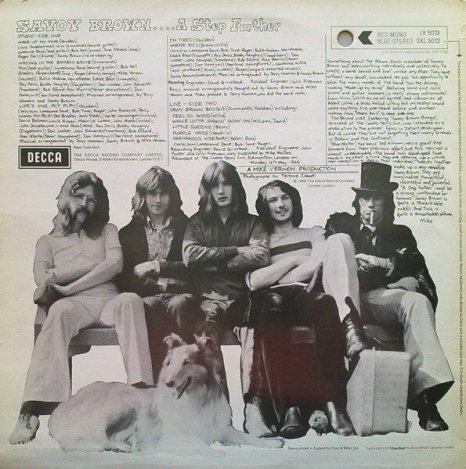 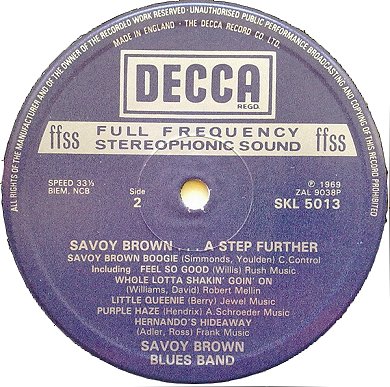 Blue Matter is the third album by the band Savoy Brown. Teaming up once again with producer Mike Vernon, it finds them experimenting even more within the blues framework. Several tracks feature piano (played by Bob Hall, guitarist Kim Simmonds, and vocalist Chris Youlden, who even plays guitar here) as well as trombone.
This album featured a mix of live and studio recordings. The live tracks were recorded on December 6, 1968 at the now defunct City of Leicester College of Education because the band was scheduled to tour the USA and needed additional tracks to complete the album in time for the tour. The booking at the college represented their only chance to record the extra tracks in a live venue before embarking on the tour. An offer to perform the concert free of charge was accepted by Chris Green, the college Social Secretary, who had made the original booking, and the concert was duly recorded, a number of the live tracks being added to the album.
Because Chris Youlden was suffering from tonsillitis, Dave Peverett stood in as lead vocalist on the live tracks.
The album track “Vicksburg Blues” had first appeared as the B-side of Decca single F 12797 (released June 1968), fronted by “Walking by Myself”. (by wikipedia)
The third release by Kim Simmonds and company, but the first to feature the most memorable lineup of the group: Simmonds, “Lonesome” Dave Peverett, Tony “Tone” Stevens, Roger Earl, and charismatic singer Chris Youlden. This one serves up a nice mixture of blues covers and originals, with the first side devoted to studio cuts and the second a live club date recording. Certainly the standout track, indeed a signature song by the band, is the tour de force “Train to Nowhere,” with its patient, insistent buildup and pounding train-whistle climax. Additionally, David Anstey’s detailed, imaginative sleeve art further boosts this a notch above most other British blues efforts.(by Peter Kurtz)
Side One is marked “Studio”; Side Two is marked “Live” and was recorded at The City of Leicester College of Education, Friday 6th December 1968. 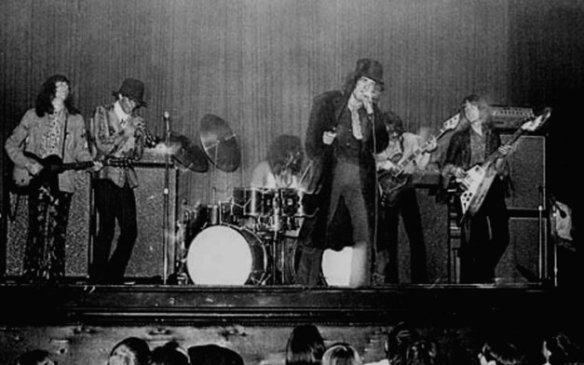 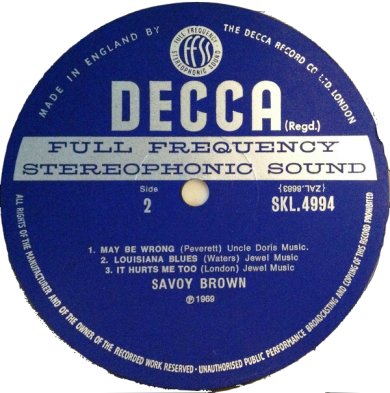 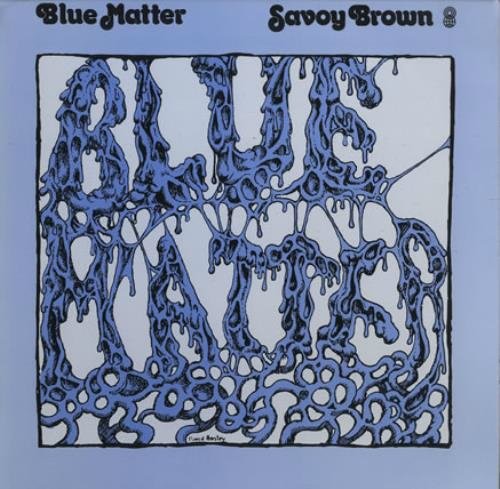 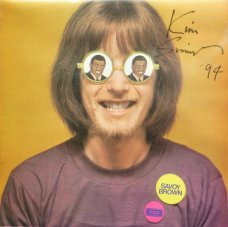 Getting to the Point is the second studio album by the British blues rock band Savoy Brown. It marks the debut of a vastly different lineup, still led by Kim Simmonds but fronted by new vocalist Chris Youlden.

It was released by Decca in 1968 with catalog number SKL 4935 and finds the group taking on more of the songwriting load, as opposed to their debut, which consisted mostly of covers. One of the covers is “You Need Love” by Willie Dixon, which served as a blueprint for “Whole Lotta Love” by Led Zeppelin. Deram released the CD with three bonus tracks in 1990 with catalog number 820 922-2. (by wikipedia)

1967 saw Savoy Brown tour as backing band for Hooker’s UK tour and also open for Cream’s first London performance.
Extensive touring was followed by personnel changes after a drugs ‘bust’ which saw in new bassist Bob Brunning from Fleetwood Mac and singer Chris Youlden. Youlden was a true find, his rich, often mournful vocal harnessed to Simmond’s fluid guitar lines levered in home grown material from both men that trademarked the Savoy Brown sound, the line-up soon enriched by the arrival of bassist “Lonesome” Dave Peverett and drummer Roger Earle.
Getting to the Point followed in March 1968, the mix now reversed with just two covers and seven originals by Youlden and Simmonds. Initially something of a downer after “Shake Down”, the album picks up half way and begins to rattle along, showcasing an individual style and a growing dynamic within the band.
Winning contemporary media plaudits for the album, this chemistry was to grow to even better purpose with subsequent releases in the last gasps of the decade.(by Greville Rob) 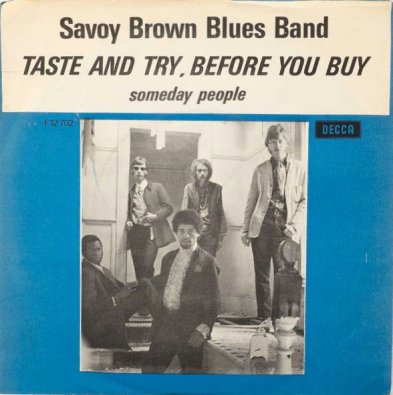 The first single with Chris Youlden (with the wrong line-up on the cover !)

Getting to the Point marks the debut of a vastly different lineup, still led by Simmonds but now fronted by new vocalist Chris Youlden. The pair got off to a good start by writing or co-writing most of the album. The playing is solid blues revival, and though Youlden’s vocals are often overly imitative of B.B. King and Muddy Waters, he has a confident voice and frontman persona. Originals like “Flood in Houston” and “Mr. Downchild” provide the highlights. (by by Keith Farley) 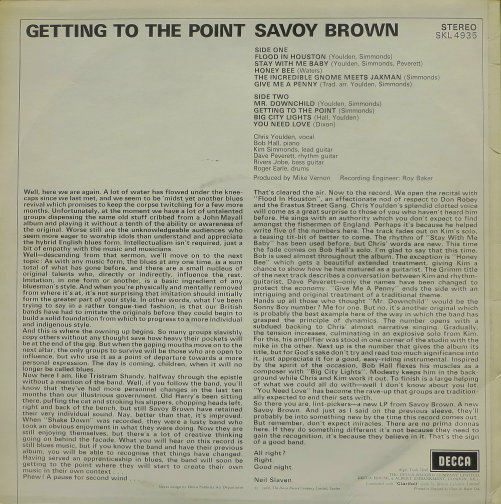 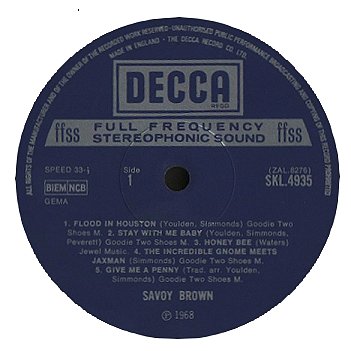 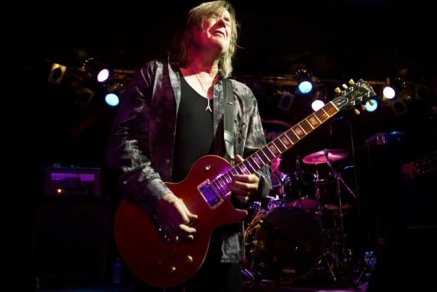