Look Around is the third studio album by Sérgio Mendes and Brasil ’66. It was released in 1968.

Mendes and Brasil 66 performed the Oscar-nominated Burt Bacharach/Hal David song “The Look of Love”, one of their biggest hits, on the Academy Awards telecast in March 1968. The album was recorded at the Sunset Sound, Western Recorders, and Annex Studios, Hollywood. Brasil ’66’s version of “The Look of Love” quickly shot into the top 10, eclipsing Dusty Springfield’s version.

“Tristeza” was an instrumental by Lobo and Nitinho and the title track of Baden Powell’s Tristeza on Guitar album (1966). It was sung by Astrud Gilberto with lyrics by A. Testa on her Italian language album (1968). (by wikipedia)

Sergio Mendes took a deep breath, expanded his sound to include strings lavishly arranged by the young Dave Grusin and Dick Hazard, went further into Brazil, and out came a gorgeous record of Brasil ’66 at the peak of its form. Here Mendes released himself from any reliance upon Antonio Carlos Jobim and rounded up a wealth of truly great material from Brazilian fellow travelers: Gilberto Gil’s jet-propelled “Roda” and Joao Donato’s clever “The Frog,” Dori Caymmi’s stunningly beautiful “Like a Lover,” Harold Lobo’s carnival-esque “Tristeza,” and Mendes himself (the haunting “So Many Stars” and the title track). Mendes was also hip enough to include “With a Little Help From My Friends” from the Beatles’ Sgt. Pepper LP. As things evolved, though, the one track that this album would be remembered for is the only other non-Brazilian tune, Burt Bacharach’s “The Look of Love,” in an inventive, grandiose arrangement with a simplified bossa beat. The tune just laid there on the album until Mendes and company performed it on the Academy Awards telecast in 1968. The performance was a sonic disaster, but no matter; the public response was huge, a single was released, and it become a monster, number four on the pop charts. So much for the reported demise of bossa nova; in Sergio Mendes’ assimilating, reshaping hands, allied with Herb Alpert’s flawless production, it was still a gold mine. (by Richard S. Ginell)

Part of Verve’s Jazz Club series, Beatles vs. Stones collects 18 songs (nine apiece) from the two British Invasion icons, all of which arrive in the form of covers performed by the likes of Count Basie (“Michelle”), Shake Keane with the Ivor Raymonde Orchestra (“As Tears Go By”), Oscar Peterson (“Yesterday”), and Caetano Veloso (“Let It Bleed”).

Appropriately budget-priced, the concept is pure novelty, but hearing the jazz elite interpret some of the most famous rock & roll songs in history is almost worth the small change. (by James Christopher Monger)

2010 collection of cover versions of Beatles and Stones classics performed by the Jazz elite. The JAZZ CLUB series is an attractive addition to the Verve catalogue. With its modern design and popular choice of repertoire, the JAZZ CLUB is not only opened for Jazz fans, but for everyone that loves good music. This collection includes tracks performed by Count Basie, Wes Montgomery, Oscar Peterson, Sergio Mendes and many others. (by cduniverse.com) 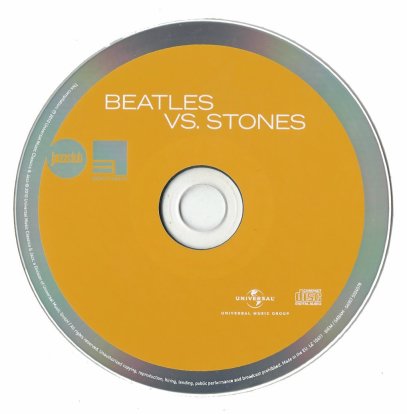