Jimmy Shand, who has died at the age of 92, was the musical icon of Scotland’s tartan sub-culture. Over more than half a century, his name was synonymous with a certain style of Scottish music and with a nostalgic image of Scotland which has proved eminently marketable around the world

His recordings sold by the million and, from the 1940s to the 1970s, the name of Jimmy Shand and his Band would fill halls throughout the United Kingdom as well as in any centre of the Scottish diaspora, New York’s Carnegie Hall included. In 1955, his Bluebell Polka was one of the most unlikely top 20 entrants of even that eclectic musical era.

Shand remained a most unlikely figure of show business celebrity. While the band, led by his own button-key accordion, produced music to set even the most reluctant toes tapping, their stage appearance often bordered on the funereal. Shand would allow himself little more than a shy grin and a few words. His was really a band for dancing to, and it was his strict sense of timing, as well as his technical skill, that set him apart. Phil Cunningham, one of the most innovative of present-day Scottish accordion players, described him as “a human metronome”.

Shand’s contribution to popularising Scottish music was immense, although it also did much to channel perceptions of it into a particular style. There is a contradiction between the free-flowing ceilidh tradition and strict tempo dance music. Shand had thousands of superb imitators – tartan jackets and all – but few, until recently, broke out of the limiting format of two accordions, piano, fiddle, double-bass and drums; the stereotype was reinforced by BBC television’s White Heather Club series of the 1960s, built around him. 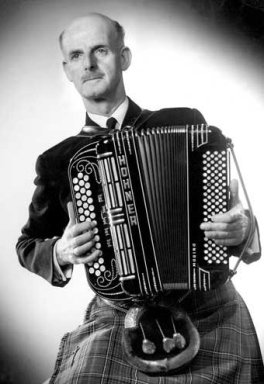 Like many talented and successful Scots, Shand came from a mining background. He was born at East Wemyss, in Fife, left school at 14 and went straight into the local pit. Conditions were terrible, and the 1926 general strike brought his career as a miner to an end. He spoke movingly in later life of his decision not to go back down the pit, though his bond with the mining communities of Fife remained extremely strong.
Advertisement

Since childhood, he had been picking up tunes on his father’s melodeon, a close relative of the button-key accordion. When he visited a music shop in Dundee, the owner gave him a job as a salesman. He thus got to know which of the better-off families bought sheet music, and sought out their houses so that he could listen to them playing and add to his knowledge.

In 1933, he made his first record, and by the following year was broadcasting for the BBC Scottish Home Service. His reputation grew steadily, but it was only after the war that he put together the Jimmy Shand Band.

The former Labour MP, Willie MacKelvey, recalls that his father was the “second box” player. The MacKelveys lived in a spacious new council house in Dundee, which, because it accommodated a piano, became the practice place as the band prepared for an increasingly hectic schedule of one-night stands, television appearances and overseas tours. The neighbours would hang out of their windows to listen. 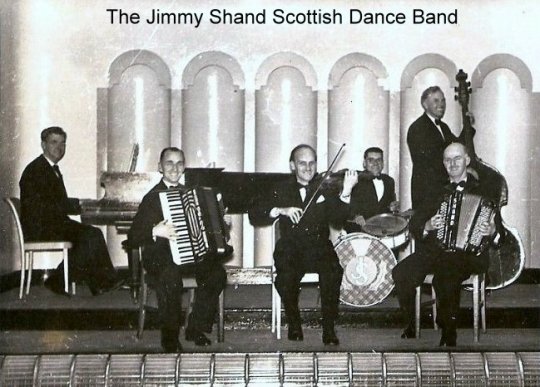 Whenever possible, Shand would head back home to Auchtermuchty, in Fife, after gigs – sometimes from as far away as the south of England. He had been a motorcycle racer in his youth and retained a love of fast vehicles and white-knuckle driving. Otherwise, his lifestyle was modest. Whatever international hotel they might be in, he would famously order for the band: “Sausage, egg and chips for six”.

In retirement, honours were showered upon him, culminating in a knighthood last year. There was never any sign of this affecting Shand. He was a shrewd, dignified, Scottish gentleman whose greatest ambition was to be at home in Auchtermuchty among his own people.

He is survived by his wife Anne, whom he married in 1936, and their two sons.

He was a strict-tempo hero of Scottish musical nostalgia. (Brian Wilson)

And here´s a compilation album with his favorites tunes … tunes from good ol´ Scotland.

All songs are Traditionals