Sharks were a British rock band, formed in September 1972, by the ex-Free bass player, Andy Fraser, upon his departure from Free. They were signed to Island Records and were rated by critics, especially for Chris Spedding’s tasteful guitar work. The initial line-up consisted of Fraser (bass, piano), Snips (real name; Steve Parsons) (vocals), Spedding (guitar) and an American, Marty Simon (drums).

Andy Fraser had originally contacted Chris Spedding, in July 1971, to discuss playing in his first post-Free band, Toby. When Fraser formed Sharks a year later, he contacted Spedding again and, this time, they agreed to work together. Fraser had already recruited his friend, Marty Simon, so auditions were held for a singer, to complete the line-up. Robert Palmer and Leo Sayer were turned down in favour of an unknown 21-year old from Yorkshire, Steve Parsons, originally spotted by Island A&R man, Muff Winwood. Parsons “played one song of his, Snakes and Swallowtails and he was in”, Spedding later told Melody Maker.

Sharks’ first gig was in October 1972, in Islington and they played a few clubs in Europe during December 1972, before returning to London, to record their debut album.

In January & February 1973, Sharks embarked on a UK tour, playing clubs and universities. To promote the band, whilst touring, Chris Spedding customized his Pontiac Le Mans, fitting a shark fin on the roof and fibreglass teeth on the grill. On 19 February 1973, on the way back to London from a gig in Cleethorpes, the car skidded and hit a tree. Fraser suffered injuries to his wrist and, during recuperation, had second thoughts about the band.

After a short break, the band went back on the road in March and April, opening for Roxy Music, although Fraser had some difficulty playing with his injury. On 17 March, they made an appearance on the BBC Two programme, Old Grey Whistle Test. The tour ended on 15 April, in Cardiff.

Sharks’ debut album, First Water, was released in the same month, to critical acclaim, but Fraser left shortly afterwards and the band began searching for a replacement. Those considered included Tom Robinson, Ric Grech and Boz Burrell. Mick Jagger then recommended a bass player from Memphis, Tennessee, Busta Cherry Jones, who joined in July 1973, along with the ex-Audience keyboard player, Nick Judd.

A new UK tour with this line-up began in September 1973 and ran through until March 1974, when their second album, Jab It in Yore Eye, was released. The band then toured the United States during April and May 1974, travelling in the same bus used by The Beatles on their first American tour, in 1964.

On their return to the UK, they began recording their third album, with the working title, ‘Music Breakout’, in June 1974. However, Simon was unhappy with the recording and was replaced by Stuart Francis. Jones then decided to return to the States, selling one of Spedding’s guitars, which he stole, to pay for the flight. With Island Records not keen on the original master recordings for the third album, financial support was withdrawn and the band folded in October 1974. (by wikipedia)

The son of Bad Company is what this debut by the band Sharks resembles, lead vocalist Snips sounding like he gargled with Kim Carnes and Paul Rodgers’ mouthwash, that gravel voice Rod Stewart made the most of accompanied here by guitar great Chris Spedding, drummer Marty Simon, and bassist Andy Fraser from the group Free. This self-titled debut doesn’t have the groove of their 1974 release, Jab It in Yore Eye, despite four of the nine songs written by Fraser (replaced by Busta Cherry Jones on the follow-up), including “Doctor Love,” a song Leslie West covered for his The Great Fatsby album, generating some early validation for this work. One of the problems here is the packaging — the bane of any act’s existence who found themselves on MCA at the time without having superstar credentials. The light-blue logo of Sharks on a deeper-blue underwater cover could be misconstrued for a children’s record. Though none of the players had the profile of a Mick Ralphs or Paul Rodgers, this was still a minor supergroup and one who fit well into the early ’70s. Album design problems aside, a song like “Broke a Feeling” comes off sounding like a jam, as does much of the record. With the redoubtable Chris Spedding on guitar — an immensely powerful individual who holds this combination together — it is still going to be worthwhile, though only for musical people and fans of this blues-based rock. When Andy Fraser punched out a number of classics with Paul Rodgers in Free, it was the songwriting that brought it over the top and onto radio. These compositions just don’t have the bite found on Free records, or Bad Company or Mott the Hoople for that matter. Andy Fraser’s “Brown Eyed Boy” and one of future Baker Gurvitz Army singer Snips’ titles, “Snakes and Swallowtails,” both sound like “Walking With a Mountain” from Mott the Hoople, blending together almost as one without the personality projected by an Ian Hunter or Paul Rodgers. It is interesting how Bad Company evolved out of Mott the Hoople and Free, both groups heavily influencing this rock & roll romp. “Driving Sideways” is light hard rock, while “Steal Away” is a light bit of blues. Perhaps that description means the band was holding back on this set of recordings engineered by Andy Johns and Tony Platt. Snips certainly can sing, and he has proficient and creative people around him on this, but the talent involved could have done so much more. They needed a “Ride Captain Ride” or an “All Right Now” to bring it home, just a tad more focus and direction to keep it from missing the mark. (by Joe Viglione) 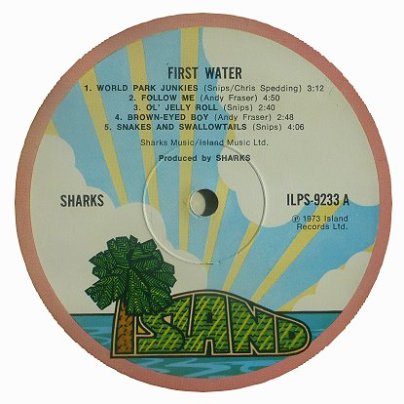