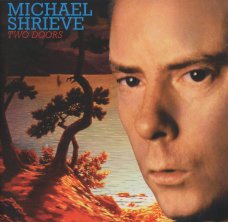 This CD contains actually 2 recordings dates compiled on one CD. The first half of the CD is from a session called Deep Umbra from 1995 with Michael Shrieve (former Santana drummer) and the late, great Shawn Lane on guitar and Jonas Hellborg on bass. This section leanes towards the Indian influences that both Lane and Hellorg became deply rooted. This session is similar to other Lane/Hellborg collaborations and even some tunes are the same as later tunes with a few names changed. Of course, there is plenty never before heard music also.

The second half of the CD in from a date called Flying Polly from 1993 with Bill Frisell on guitar and Wayne Horvitz on organ. This is great guitar playing by Frisell from avant garde styles to rock and jazz. Horvitz’s organ playing is a nice compliment to Frisell. Shrieve’s playing is great through out.

In total this CD has almost 1:20 minutes of music. This is a must have for any Hellborg/Lane fans as well as Frisell fans. (by L. Rosenbaum)

Former Santana drummer Michael Shrieve’s 1995 release Two Doors is appropriately titled, for it is really two albums in one, with two different trios providing the music. The first half of the record, subtitled “Deep Umbra,” features Shrieve with guitarist Shawn Lane and bassist Jonas Hellborg performing eight jazz-rock compositions full of catchy themes and fiery improvisations. Lane is, simply put, one of the most technically gifted guitarists ever to pick up the instrument, and he records far too obscurely and infrequently. It is to his great credit that he never displays his abilities gratuitously, but instead carefully measures them out for maximum impact. He is a consummate musician. The same could be said about Hellborg, who not only holds down the bottom end with his sensitive yet powerful bass, but also shares co-writing credits for seven of the eight songs that he appears on. The second half of the record, subtitled “Flying Polly,” features Bill Frisell and Wayne Horvitz. This half of the record is jazzier and more avant-garde than the first half, and frankly doesn’t work nearly as well. There are moments where some of the rockabilly jazz elements that Frisell and Horvitz explored in John Zorn’s Naked City come to the foreground, but, besides that, most of this portion of the record sounds flat and uninspired. It is a shame that this had to be the case, especially considering how good the Lane-Hellborg trio is. However, Shrieve’s drums are very nicely recorded, and he always plays the most appropriate thing for any given song, never showboating or otherwise distracting from the integrity of the composition. There is much merit in this frustratingly inconsistent album, and for fusion fans it is worth searching out. (by Daniel Gioffre)